The week's amphibian photos have been truly ...ribbeting. 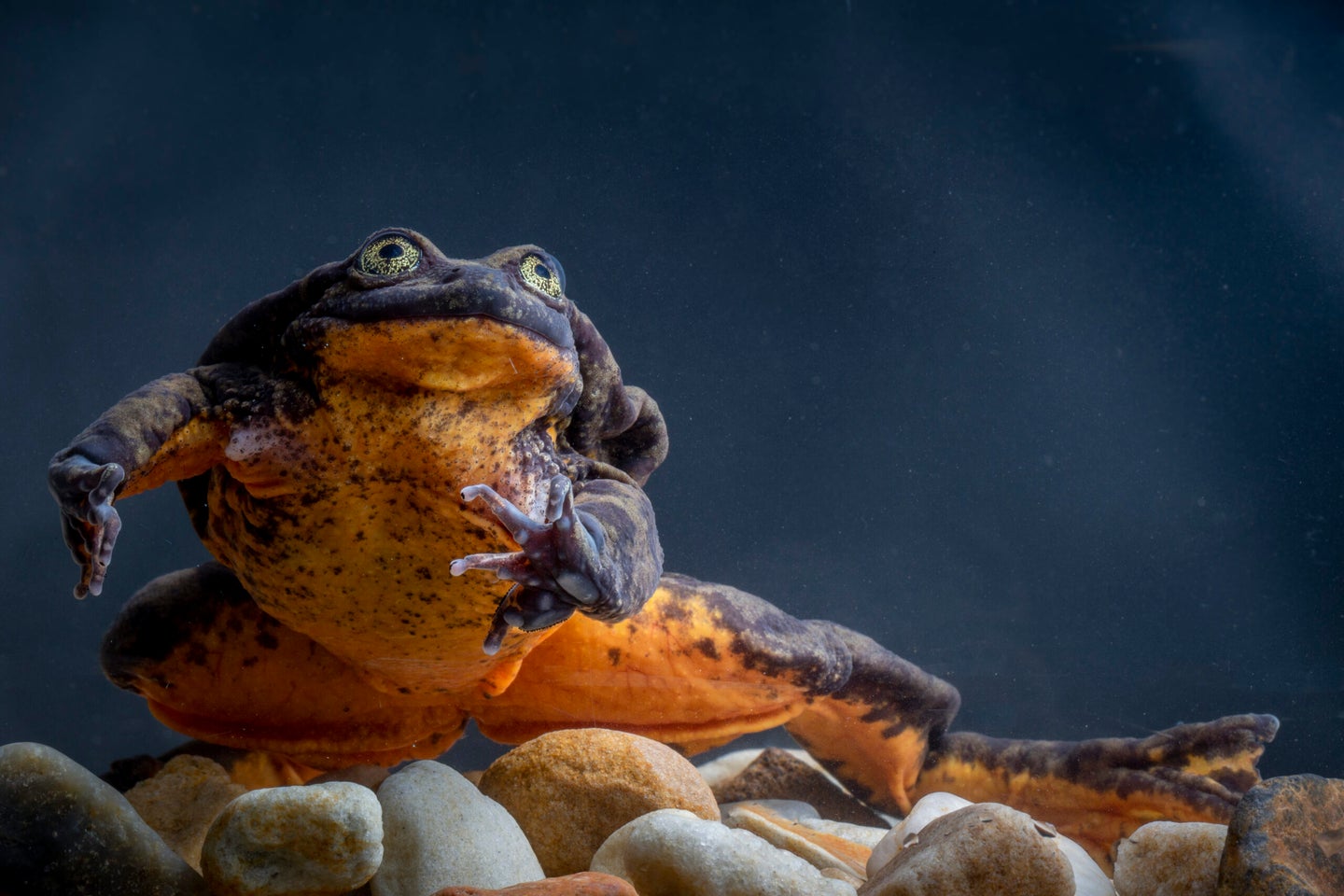 Last week was chock-full of frog news, both heart-warming and heart-breaking. Here are the top four photo-worthy events:

Romeo (pictured above in all his orange tummy glory), was thought to be the last Sehuencas water frog in existence. Ever since biologists scooped him out of the wilds of Bolivia, he’s been the most eligible frog bachelor in the world. Most recently, the Global Wildlife Conservation group created a Match dot com dating profile in order to find Romeo his better half—by sending an expedition to South America. The search worked: biologists identified two males and three females of the same species in Bolivian cloud forests, densely-wooded regions perpetually enshrouded in canopy-level silvagenitus clouds. On Monday, the conservation group announced that Romeo had successfully bonded with a mate, aptly named Juliet. The two lovers can be seen below.

Lonely Romeo had stopped making mating calls altogether in 2017. But according to a press release, he began ribbeting again in March, after Juliet moved into his aquarium. The duo have so far struggled with mating, however. Romeo hasn’t assumed the right position for amplexus—the frog mating ritual where females lay eggs as the males fertilize them from behind—often enough or long enough (some male frogs can keep the shape for “week or even months,” according to a press release). But his caretakers remain hopeful.

Herpetologist Mark Scherz and his colleagues recently published a study in PLOS ONE announcing they’d identified five new miniature frog species in Madagascar. Three are named “Mini mum, Mini scule, and Mini ature, because I am HILARIOUS,” Scherz tweeted. He’s serious: the frog seen above, perched on a fingernail, is a real, live Mini mum. The new species have been described as “staple-sized” and “astronomically-small”. Going forward, the researchers hope to better understand how the frogs, which span three genera, evolved to be so teeny.

… And an invasive frog-killing fungus

The Helena’s marsupial frog, seen above, is a member of the Hemiphractidae family, which live in Central and South America. These photogenic amphibians are threatened by a deadly fungus, chytridiomycosis, or simply chytrid. The fungus is the most invasive species in the world, according to a new report in the journal Science. It has negatively affected a whopping 501 amphibious species. When chytrid creeps across the porous skin of a frog, toad, or salamander, it impedes electrolyte transport, and ultimately triggers a fatal heart attack.

Despite its cute common name, the pumpkin toadlet is actually a very poisonous frog. Its bright colors are a warning sign—a biological phenomenon called aposematism. But it turns out the frogs, native to the Atlantic forest along the coast of Brazil, have been keeping their niftiest feature to themselves. When Sandra Goutte, a postdoctoral associate at NYU Abu Dhabi, and her colleagues “discovered that Brachycephalus ephippium could not hear its own mating calls, they searched for alternative visual signals the frogs could use to communicate instead,” according to a press release. They shined a UV light on the hoppers, and were surprised to find their backs glowed. Turns out, the pumpkin toadlet’s skeleton is unusually fluorescent, according to the new research published Friday in the journal Scientific Reports. Because their skin is so thin, the UV lamp actually hit the bones of the two specimens under analysis, triggering that eerie gleam.