The 2018 Nobel Prize honors what might be our best shot at beating cancer. 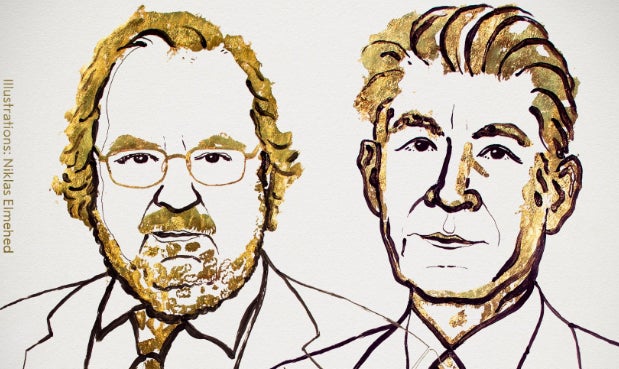 The Nobel Prize, though often questionable in its selections, captivates the world each year. While there are now scientific awards with larger monetary prizes, there is no prize so universally and immediately recognized as a sign of prestige.

The 2018 season kicked off on Monday with the Nobel Prize in Physiology or Medicine, which this year honors two researchers for their work on cancer therapy. James P. Allison, 70, born in Alice, Texas, and now affiliated with the University of Texas MD Anderson Cancer Center and the Parker Institute for Cancer Immunotherapy in San Francisco, splits the prize with Tasuku Honjo, 76, a professor at Kyoto University in Japan. Their joint prize includes 9,000,000 Swedish Krona, which is a bit more than $1,000,000 USD.

In the 1990s, Allison and Honjo did separate but parallel research on the use of the human immune system to fight cancer. Because cancer is a disease caused by the mutation of a body’s own cells, our immune systems rarely offer much assistance. Allison and Honjo showed how two different proteins can, in slightly different ways, pump the brakes on an immune system’s attempts to attack multiplying cancer cells. If someone disabled such brakes, their work suggested, the immune system might have a fighting chance against cancer. The work they and others did at that time led to the development of immunotherapy as a cancer treatment, which is now a quickly growing field. This was the first step toward cancer therapies more precise and less brutal than surgery, radiation, and chemotherapy.

This award is also the first Nobel Prize to be awarded to a cancer therapy. Past Nobels have been awarded to discoveries made to understand the mechanisms through which cancer cells work, but this is the first one that has directly translated into a clinical therapy to treat people with cancer.

Drugs based on these and similar proteins now help treat several types of cancer, and are known as immune checkpoint inhibitors.

“I’m so thrilled that a Nobel has been awarded for this game-changing cancer therapy,” Dan Davis of the University of Manchester told The Guardian. “It doesn’t work for everyone but lives have been saved, and it has sparked a revolution in thinking about the many other ways in which the immune system can be harnessed or unleashed to fight cancer and other illnesses. I think this is just the tip of the iceberg—many more medicines like this are on the horizon.”

At a press conference Monday morning in New York City, Allison said he was still in shock from the news (which he’d learned via a 5:30 a.m. wake up call from his son).

To him, he said, what’s so special about his now prized discoveries is the direct connection they make between basic research and clinical medicine. “I didn’t get into this to cure cancer, but to understand how T-cells work,” Allison said. “As a basic scientist, to see this work 20 years later really helping patients” has been the most rewarding, he said.

What does this mean for cancer patients now—and in the future?

Prior to Allison and Honjo’s work, the main pillars of cancer treatment were surgery to rid the body of as much of the cancer as possible, and chemotherapy and radiation to kill every remaining cancerous cell. What these discoveries did, Allison said, is bring a fourth pillar to cancer treatments’ arsenal in the form of immunotherapy. While it’s still not completely clear where immunotherapies will fit into more traditional treatments, Allison said, it will likely change the way we use our older arsenal.

For example, the process that jumpstarts the immune system’s fight against cancer starts with the death of some of those malignant cells. So if chemotherapy and radiation can initiate that process, then immunotherapy will have a chance to come in and enable the body to kill off the rest—and, theoretically, keep them gone for good.

By showing that the immune system can be tweaked to ward off cancer cells, Allison and Honjo helped inspire the latest generation of gene-edited cancer therapies. Our 2017 Best of What’s New Awards honored Kymriah, the first FDA-approved treatment to utilize gene-edited white blood cells to fight the disease. Its results are astounding, but Kymriah still isn’t a magic bullet for all patients—or even for all types of cancers. Researchers are working on getting Novartis’ Kymriah and Kite Pharma’s Yescarta (two brands of the same therapy, generically known as CAR T-cell immunotherapy) approved for more varieties of the disease, but as PopSci reported back in December, the treatments have a long way to go. When they work, they often work miraculously. When they don’t, they can cause life-threatening side effects. And even patients who seem to do well aren’t always given the life-long bill of health they hope for.

But despite all the typical bumps in the road of a new form of medicine, immunotherapy is undoubtedly our best shot at making cancer—at least as we know it—a thing of the past.

“How dare I use the word cure,” Allison says, but “that’s the hope with these kind of therapies. Once you’ve got T-cells you’ve got them for the rest of your life. They don’t go away. If you give a chemotherapy drug, it’s gone in hours.”

And for what it’s worth, Allison may well be among the best harmonica players in Nobel history: