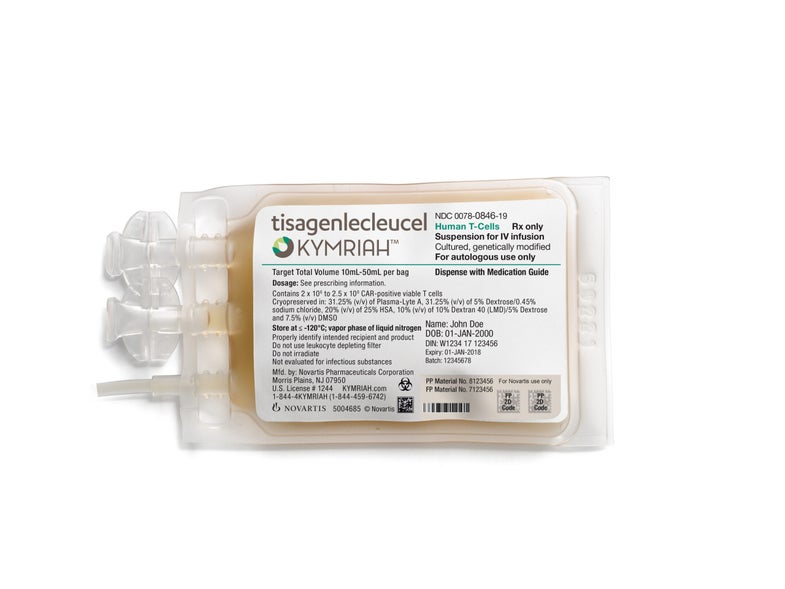 In the past decade, immunotherapies have become an increasingly promising way of combatting cancer. Most of them work by hijacking the body’s immune system and employing it to fight disease. But one treatment has arguably shown the most promise. Originally known as CAR T-cell immunotherapy, two brands of the treatment were recently approved by the FDA: Novartis’ Kymriah and Kite Pharma’s Yescarta. The treatment is arguably the most precise and potentially curative to date, and is the first available human gene therapy for cancer. Now, in two studies out today in the New England Journal of Medicine, researchers report the therapy’s success in treating a type of lymphoma.

The studies, which were used to help the treatments gain FDA approval, show that this type of therapy can be highly effective in a variety of hospital and clinical settings around the world. And by comparing individuals who don’t respond to ones who do, researchers hope to make it so that everyone responds to these treatments.

CAR T-cell treatment works by removing a person’s T cells, which are specialized white blood cells used to fight disease. Scientists tweak the genes of those T cells to give them a receptor—specially programmed, so to speak, to find and destroy every cancer cell in the body. The cells are then returned to the patient’s body,reinfused back into a person’s body where they go to work obliterating their targets.

The treatment has been tremendously successful in people with certain blood cancers, particularly in children with a kind of leukemia called acute lymphoblastic leukemia (ALL). These two new studies show a similar success in people with two different types of non-Hodgkin’s lymphoma, another type of blood cancer.

When the treatment works, it seems like an almost ideal therapy. Unlike chemotherapy and radiation, it’s a one-time procedure, and does away with many of the worst side effects associated with cancer treatment. And in theory, it should fight off cancer for the rest of a patient’s life.

Unfortunately, few things in life are ever perfect, and CAR T is no exception. In its attempt to kill cancer cells, the treatment effectively sends the immune system into overdrive. That jacked-up immune response can often cause something called cytokine-release syndrome. The cells that the engineered T cells target release a group of proteins known as cytokines, triggering a massive inflammatory response. This can be too much for the body to handle, and can cause life-threatening side effects like severely high fevers and dangerously low blood pressure. The treatment can also cause transient encephalopathy, or a temporary inflammation in the brain.

But the Yescarta and Kymriah studies also show that these types of side effects can be effectively managed in a number of different hospital and clinical settings, including facilities that haven’t used this therapy before. The FDA has initially restricted the use of CAR T therapies to a select number of large research hospitals. But if this therapy is to become a mainstay, it must be useable in a number of different settings.

Another major fallback of CAR T therapy is that its effects are sometimes temporary, with cancer returning within a matter of months. And for some patients, it simply doesn’t work at all. Indeed, both studies observed many patients who did not achieve complete remission (27 percent in the Kymriah study and 58 percent in the Yescarta paper). For now, that means CAR T is unlikely to serve as a first line of defense against cancer. But understanding why it sometimes fails could help researchers turn it into a therapy that cures everyone.

To figure this out, the researchers in the Kymriah study did several comparisons of the two groups: those that did respond and those that didn’t. Interestingly, the scientists couldn’t find any significant difference in the disease’s degree of severity. However, when they looked at the tumors under a microscope,they found that people who did respond to the treatment had lower levels of a certain type of tumor cell called immune-checkpoint ligands.

That could be an important clue. However, the researchers note that the low number of people used in this comparison—just five in each group—means that they can’t say with any certainty that this would apply to the general population. They’ll have to keep studying patients who don’t respond well to CAR T in the hopes of figuring out where the therapy is failing.

CAR T is an incredibly promising cancer treatment, even though it’s currently only approved for a few cancers—and is not always effective in treating those diseases, at that. For now, even the approved cancers are still meant to be treated primarily with chemo and radiation. Doctors are only meant to turn to CAR T if nothing else works.

Ideally, more research will turn CAR T into the first line of defense against all sorts of cancers. But before that can happen, researchers need to treat a lot more patients, including ones with less severe disease. This will not only help them understand the treatment better, but how cancer arises and spreads as well.