Contagious cancer is killing off Tasmanian devils, but there might finally be hope

This could save the species from extinction. 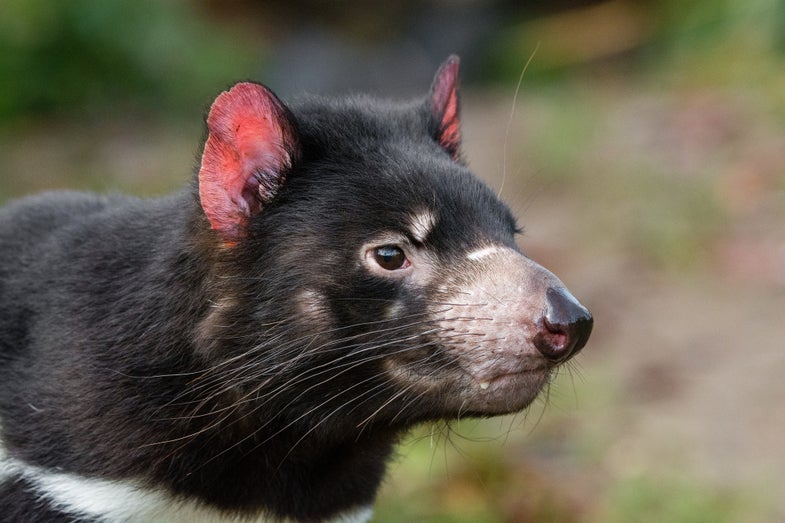 Cancer is one of the few diseases that we don’t think of as being contagious. But that’s not true if you’re a tasmanian devil.

Devils are one of the very few unlucky creatures on this planet to carry a transmissible cancer, and they don’t just have one—they can contract two separate contagious kinds of tumors. The disfiguring facial growths eventually kill them. Nearly 95 percent of affected populations have died (most of the island is infected at this point), and devils are nearly extinct because of it. Researchers have been trying to save the population by capturing uninfected individuals to prevent them from succumbing to the disease, but now a new paper in Cancer Cell suggests there might be another way: just give them human chemotherapy.

Let’s take a step back here, though. What’s a transmissible cancer? And why do tasmanian devils have two of them?

Most cancers—the vast, vast majority—cannot be transferred from one person (or animal) to another. Unlike viruses or bacteria, which are foreign agents designed to infiltrate our bodies, cancer arises when own cells start to grow out of control. This makes it difficult for our immune systems to recognize a tumor as a threat, because all the cells inside are technically part of us. Our immune system is only supposed to attack foreign bodies (though it often screws this up in the form of allergies and autoimmune diseases), so it sees cancer as harmless cell growth instead of a dangerous infiltration. All human cells carry a molecule on their surface called the major histocompatibility complex, or MHC, whose job is basically to tell your immune system “hey, I’m a part of you, don’t kill me.” This is how your body avoids killing itself.

If you tried to inject cancer cells from one person into another, the recipient’s immune system would recognize those cells instantly as foreign, because the MHC molecule would be different. It would kill the cancer cells before they had a chance to take hold.

But if something goes wrong in this MHC-identifying process, cancer can be contagious.

We unfortunately know it’s true in humans, as long as the recipients are sufficiently immunocompromised. Back in 1954, a virologist named Chester Southam injected prisoners and elderly people with HeLa cells (the cancer cells taken from a woman named Henrietta Lacks that are used worldwide in cancer research). Some of those people got cancer because their immune systems weren’t able to identify the cells as foreign, and allowed them to proliferate.

A similar phenomenon happens in tasmanian devils, but for different reasons.

Devils live on the island of Tasmania, which is an isolated ecosystem 150 miles south of the Australian mainland. Because they’ve been interbreeding within a relatively small population for so long, the critters aren’t very genetically diverse. They’re all remarkably similar, which makes their MHC molecules pretty similar, too. This alone doesn’t mean that all devils can get exactly the same cancer, but it does predispose them to transmissible tumors.

Then there’s their unfortunate habit of chewing on each other’s faces. Tasmanian devils are incredibly aggressive, and they often fight by biting one another to establish dominance. They’re biting hard enough to draw blood (and often some flesh along with it), and since the tumors grow on their faces, the cancer cells from one animal easily mix with another, slipping into the recipient’s bloodstream.

At least one of the cancers also seems to have acquired mutations that allow for the deletion of the MHC molecule, making it difficult for the immune system to detect, plus some extra genetic changes that allow the tumor to evade the host’s immune cells (the researchers haven’t yet analyzed the second tumor).

This all combines to make tasmanian devils uniquely susceptible to these transmissible cancers. And that meant that when a single tumor arose in a single female devil living on the northeast part of the island, it was able to spread through the population rapidly. Researchers first picked up signs of it in 1996, and it has swept across the devils in the meantime. They found a second tumor, similar in many ways but not related to the first, that arose in the southern section of the island, this time in a male devil.

Together, the two tumors are ravaging the population. That’s why these scientists decided to sample the tumors and genetically analyze them: to figure out how the cancer cells operate, and therefore how to stop them.

Though every individual cancer is different, the cellular pathways that get mutated in cancers all tend to follow similar paths. Cancer is, fundamentally, a problem of division. Your cells have mutated and now some of them are multiplying way faster than they should, which causes problems in whatever organ they happen to be growing in. This means the pathways involved in cellular growth commonly get mutated in such a way that they’re always turned “on” (the cancer cells constantly get a signal telling them to divide).

Targeted therapy drugs are based on these kinds of pathways. We essentially design a molecule that interferes with the pathway—maybe it uses another molecule to block it from binding to a receptor, or turns off a key protein in the pathway—and then those disabled cancer cells die off. (This is different from standard chemotherapy, which works by blocking cell division in general.)

It’s important to keep in mind that this is only an in vitro experiment, and we don’t know for sure that these drugs will work in real devils as opposed to their cells in a Petri dish. But it’s an important step forward. Now we know which chemotherapies might work, and conservationists can test them out in the living population. Maybe it’ll fail—certainly lots of human cancer trials fail. But it’s quite literally the only solution we’ve got right now.