But there’s still a long way to go. 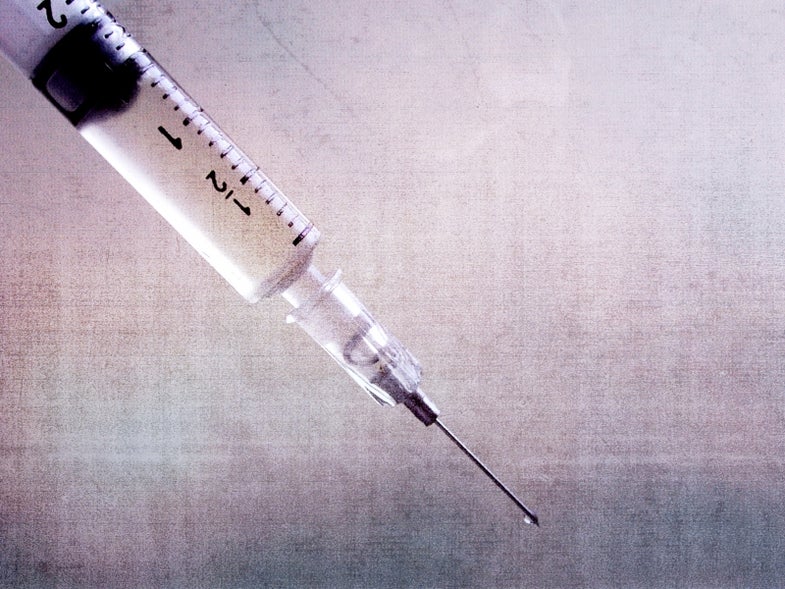 By the end of the year, Mymetics will publish the results of a Phase 1 clinical trial of its vaccine against the human immunodeficiency virus. An earlier animal study showed that the vaccine, which triggers antibodies in both blood and mucus membranes, provided 100 percent protection. Simplirix
SHARE

What if curing cancer was as easy as getting an injection? That’s just what a pair of studies published this week in Nature tried to figure out.

The two teams of researchers conducted independent Phase I trials of personalized vaccines designed to prime the patients’ immune systems against melanomas, a category of skin cancers. In a scientific double whammy, both studies found that their vaccines—sometimes in combination with other immunotherapies—were able to prevent recurrence of the cancers in nearly all their subjects.

“We can safely and feasibly create a vaccine that is personalized to an individual’s tumor,” says Catherine Wu, senior author of one of the studies and associate professor at Dana-Farber Cancer Institute in Boston. “It’s not one-size-fits-all—rather, it’s tailored to the genetic composition of the patient’s tumor.”

Wu carried out her study with colleagues in Boston at Dana-Farber Cancer Institute and the Broad Institute. The other study was conducted in parallel by researchers in Germany, led by study first author Ugur Sahin, the co-founder and CEO of BioNTech, a biotechnology company that focuses on personalized immunotherapy treatments.

Both studies targeted the same type of cancer: melanoma. These skin cancers (best known for their link to UV radiation from tanning) are a good first target, Wu says, because scientists have a good understanding of the mutations that cause them. These mutations are the key, says Mathias Vormehr, a co-author on Sahin’s study and a scientist at BioNTech.

“In principle, you can target any tumor that has mutations,” Vormehr says. “And mutations are a main feature of tumors.”

The goal of a cancer vaccine is to turn the patient’s own immune system against the cancer by teaching it to fight the tumor cells. This is similar to other vaccines like the flu vaccine which contains dead or weakened flu viruses that can’t actually do harm but can model what the the immune system should be prepared to fight.

Past attempts to create cancer vaccines have used gene-carrying viruses to reprogram immune cells to recognize cancerous cells. Others removed some immune cells from the patient’s blood, taught them to recognize the cancer cells outside the body, then re-injected the trained immune cells into the patient to go to work.

Since all tumors are different, the vaccine had to be personalized. To figure out which neoantigens were unique to a patient’s tumor, the researchers sequenced the tumor’s DNA and each group of researchers developed their own computer algorithm to identify the unique segments of DNA that encoded the instructions to assemble these neoantigens.

This is the point where Wu and Sahin’s studies diverged. The goal was to get the neoantigens into the patient to prime their immune system. Wu’s team loaded up the vaccine with the neoantigens themselves, while Sahin’s vaccines delivered the corresponding RNA — a cellular intermediary between DNA and proteins—so that the patient’s own cells could create the neoantigen. Sahin’s team chose to use RNA because RNA serves a two-in-one role in the vaccine, Vormehr says. Vaccines normally have an added component that boosts the immune response, and RNA can accomplish that on its own.

(Remember that these cancer vaccines aren’t preventative, like the ones that you take for the flu. They are “therapeutic vaccines,” designed after the onset of cancer to target each individual’s tumor specifically.)

Both studies found that vaccination resulted in suppression of the cancer in many of their subjects. In the cases where the cancer was not successfully eliminated, Wu and Sahin both tried adding another treatment called checkpoint therapy, which keeps the cancerous cells from avoiding detection by the immune system. And two was, in fact, better than one: They found that the combination of the two methods improved vaccine response.

Of the six subjects in Wu’s study, four had stage III cancer and 25 months after vaccination, there was no sign of tumors. In the other two subjects, who had stage IV melanomas, they saw improvement with additional checkpoint therapy. Likewise, in Sahin’s study, eight out of 13 initially tumor-free subjects remained tumor-free 23 months later; normally half of them would be expected to relapse, Vormehr says. Of five subjects who relapsed, two responded positively to the vaccine, and a third responded when the vaccine was combined with checkpoint blockade therapy. Looking more closely, both sets of researchers found that their subjects’ immune systems were learning to react to the neoantigens.

The purpose of the initial study was just to look for anti-tumor activity, says Matthias Miller, a senior project manager and co-author of the BioNTech study. In both cases, the trials were relatively small and did not have un-vaccinated control subjects. In a Nature News & Views piece that accompanied the two studies, Cornelis Melief, a professor at Leiden University Medical Center in the Netherlands who was not involved in either study, called for further Phase II clinical trials with larger samples and controls to more rigorously demonstrate the effectiveness of these vaccines.

One limitation of the studies was that not all cancer patients have neoantigen mutations that can be used to design these personalized vaccines, says Sasha Stanton, a physician-scientist in the University of Washington’s Tumor Vaccine Group who was not involved in the study.

“Neoantigen vaccines are very exciting in metastatic cancer or in locally advanced cancer,” Stanton says. “They are less beneficial in prevention and earlier stage cancer.”

Additionally, the process is time intensive—for example, in Wu’s study, it took three months for the patient to receive the vaccine—and not all patients can remain stable for that long, Stanton says. Production of the vaccine will also have to become more streamlined, Wu says, but she believes the timeframe can be brought down to 4-6 weeks. Miller is also optimistic about the accessibility of the BioNTech vaccine.

“It will be affordable,” Miller says. “It can definitely reach the broader public upon improvement of the process.”

BioNTech is working with Genentech, a pharmaceutical company, to further develop their vaccine, while Wu’s team is participating in a multi-center combination therapy trial sponsored by Neon Therapeutics, a pharmaceutical company founded by Wu. If future trials are successful, Wu says, there will be many opportunities to apply personalized vaccines to other types of cancer; glioblastoma, a type of brain cancer, is one possible target.