CRISPR reached a big milestone this year by treating a disease inside the body—here's what's next for the technology. 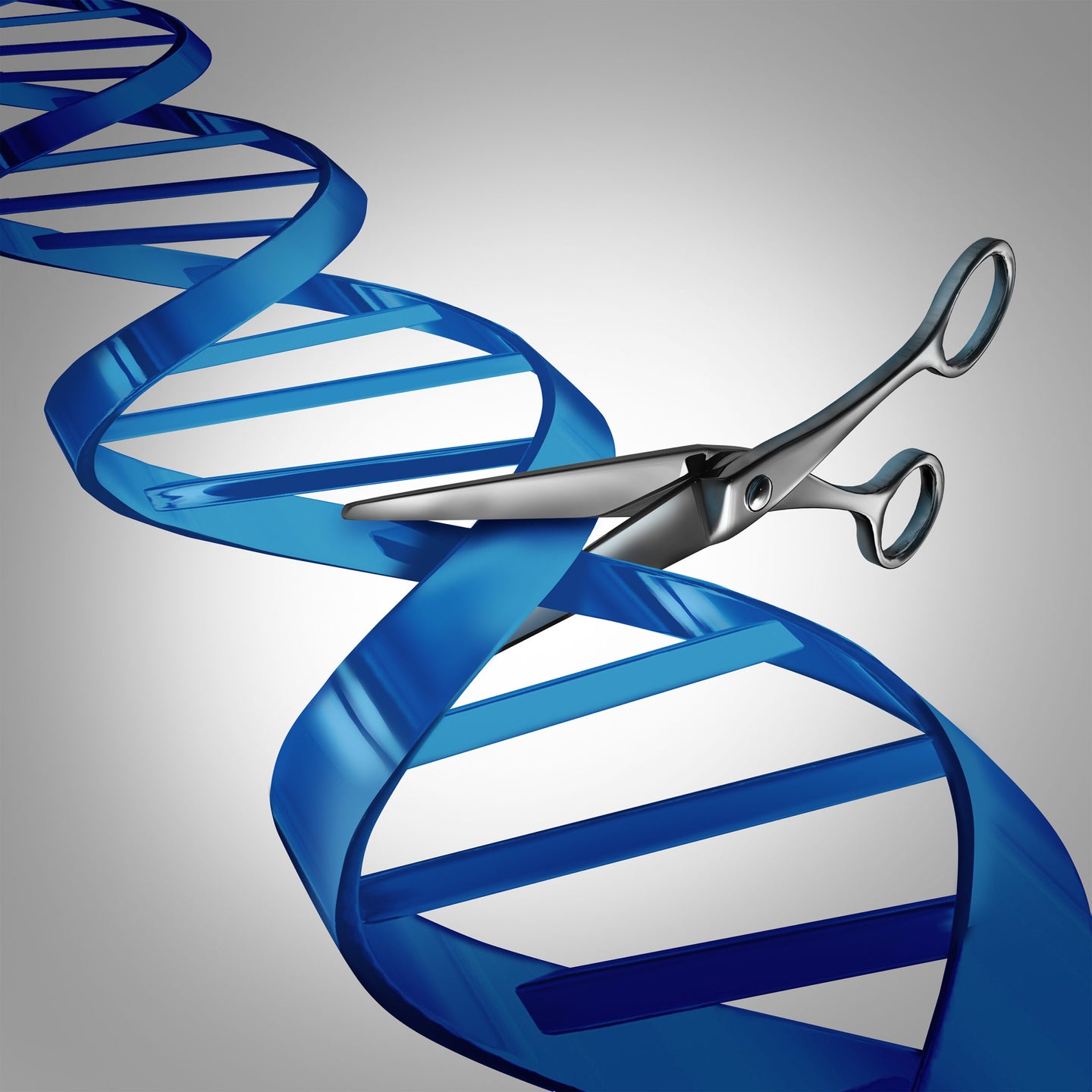 It’s been nearly a decade since a pair of biologists discovered CRISPR, the gene-editing technology that allows scientists to edit DNA with relative ease. Last year, the two scientists—Jennifer Doudna and Emmanuelle Charpentier—shared a Nobel Prize for their work. Since the discovery, scientists around the world have been investigating how the method could be used as a treatment for diseases from sickle cell anemia to HIV.

Until now, scientists have used CRISPR to treat diseases by removing some of a person’s cells and applying the gene-editing technology to the cells in a lab. In the case of sickle cell anemia, for example, where red blood cells become misshapen and fail to function properly, doctors will remove cells called hematopoietic stem cells, which will eventually turn into red blood cells and other blood cells. They then apply the gene editing technology to those cells, which makes changes to address the genetic defect causing the faulty blood cells, and insert the cells back into the body.

But over the past few years, researchers have been experimenting with a new tactic: injecting the DNA editing tech directly into the bloodstream. This method has several advantages, including the ability to treat a wider range of diseases with more ease and less cost. At the same time, some researchers are taking pause, noting that this new method brings risks, including mistakenly editing healthy genes without a good way to stop it.

“I think that we definitely need to be cautious about any new technology,” says Qiaobing Xu, an associate professor of biomedical engineering at Tufts University. At the same time, he says, there should be a “willingness to move the technology forward.”

In a small, six-person study, published in the New England Journal of Medicine last month, researchers attempted to treat six people with a rare genetic disease called transthyretin amyloidosis with a new technology that delivers CRISPR directly to cells in the liver. Transthyretin amyloidosis causes a defective protein called amyloid to build up in the body resulting in progressive nerve damage and, in many cases, heart failure. Symptoms can start as early as the late twenties, and the disease is typically fatal seven to 12 years after symptoms begin. “It really is an awful disease,” says Julian Gillmore, a professor of medicine at the University College London’s Royal Free Hospital and the lead author of the study.

The study is the first part of an early clinical trial of a drug called NTLA-2001, which packages CRISPR technology inside a tiny blob called a lipid nanoparticle. The containers ferry the gene-editing technology to the liver, where almost all transthyretin, the defective protein, is produced. There, the CRISPR tech goes to work correcting the defective cells until the liver produces the correct version of transthyretin.

[Related: Doctors altered a person’s genes with CRISPR for the first time in the U.S. Here’s what could be next.]

The primary goal of the study was to examine the safety of the treatment, but, because the excess amyloid causes the symptoms associated with the disease, any reduction in symptoms seen during the experimental trial hints that the treatment is working. The participants in the study were divided into two groups: three people who got a lower dose of the CRISPR-infused lipid nanoparticles and three people who got a slightly higher dose. For those who received the lower dose, the amount of defective liver cells decreased by about half and those in the higher dose group saw a nearly 90 percent reduction in faulty cells.

The study is still ongoing; researchers will continue to test even higher doses of the drug to see which is the most safe and effective. They will also follow all the participants for two years after they receive the treatment to watch for any long-term effects, like cancers or other genetic conditions that could be caused by accidental gene changes. These effects are a particular concern with CRISPR. To understand why, it’s helpful to know a little bit more about how the technology works.

A shot in the dark

CRISPR stands for “clustered regularly interspaced short palindromic repeats.” Bacteria contain  short, repeating genetic sequences throughout their genes. Between these segments, bacteria store the genetic sequences of viruses that previously infected the organism. By keeping bits of the invading microorganism, the infected bacteria can “remember” and attack viruses with these genes by cutting them up when they attack again. A protein called Cas-9 (Cas stands for “CRISPR-associated”) is responsible for cutting up the genetic material of invading viruses. When studying this system, Doudna and Charpentier realized that by altering the biological “guide” the protein used, they could get the Cas-9 protein to make a cut in DNA anywhere they wanted in a genome, so that any genes could be deactivated or new ones inserted.

Though gene editing already existed before CRISPR, the new technology was vastly easier to implement, and, in comparison to earlier techniques, is far cheaper. But it also has limitations. CRISPR technology can “tolerate non-exact sequences,” says Martin Schiller, the executive director of the Nevada Institute for Personalized Medicine and a professor of life sciences at the University of Nevada who was not involved in the study. That means that it can have what’s called off-target effects—it can edit sequences that are nearly, but not exactly, identical to the faulty genes the tech is designed to correct. That can have serious consequences, Schiller says. For example, a genetic mutation could mistakenly instruct cells to uncontrollably divide, causing cancer.

This potential for harm complicates one of the main benefits of the new technology, which is that it enables CRISPR to reach all or most liver cells. There isn’t currently another way to use CRISPR to treat liver disease, said Xu. Though it is possible to edit liver cells outside the body, doctors can’t remove a person’s liver to edit every cell this way, and editing only some cells wouldn’t effectively treat the disease. There has been some research on editing liver stem cells outside the body, which would affect all liver cells, but that would be more costly, and it might be difficult to collect enough of the cells, said Xu. On the other hand, when scientists use CRISPR outside of the body, says Schiller, they can sequence genomes to detect any rogue editing. But when the editing happens in the body, they have no way of knowing if something went wrong.

The researchers in the study did take precautions to avoid off-target effects. In pre-clinical testing on human liver cells, they used a computer program to identify areas at risk for being incorrectly targeted by CRISPR. They found that all of the areas were in non-coding regions of the genome—as far as scientists can tell, these sequences of DNA don’t do anything. Even so, when they examined these areas in a sample of human liver cells in a petri dish in a lab, they didn’t find any off-target effects.

Gillmore, the study’s lead author, was reassured by this finding. But not everyone is convinced that the technology will always yield no consequences. The study was small, Schiller points out, making it nearly impossible to know if, for instance, a participant developing cancer in two years is linked to the trial or would have happened anyway. “It’s a shot in the dark,” he says. “We don’t know what’s gonna happen.”

The future of CRISPR

This new advance follows nearly a decade of scientists exploring new therapeutic uses for CRISPR. In 2019, CRISPR was tested for the first time on a woman with sickle cell disease, and last year, scientists injected CRISPR directly into the body for the first time—into the eye, to test a treatment for a rare genetic condition that causes blindness. An HIV treatment involving CRISPR also seemed to be successful when tested on mice, though it hasn’t yet been tested in people. There are immunotherapy treatments being tested that utilize CRISPR to modify immune cells so that they can better attack cancer.

[Related: Two women just won the Nobel Prize for their work on the gene-editing technique CRISPR]

Gillmore and Tuft’s Xu, who was not involved in the study, see the new technology as a breakthrough, and, though they acknowledge that there are always risks with gene-editing, think it might be applied to other diseases that impact liver cells in the future. Intellia Therapeutics, the biotech company that led the development of NTLA-2001 and funded the trial along with pharmaceutical company Regeneron, has already created an altered version of the drug for treating hereditary angioedema, a genetic disease which causes spontaneous episodes of severe swelling beneath the skin, that they hope to soon test on people. Like with transthyretin amyloidosis, this drug would go to liver cells, targeting a gene that influences overproduction of the protein bradykinin, which leads to the swelling.

But Schiller still has some reservations about the potential of the new method. Because CRISPR can have potentially harmful off-target effects, he doesn’t see it being widely used in the future in the same way that it was used in this study. Instead, he suspects CRISPR will continue to be used mainly as it has been—editing genes when cells are outside the body. He also sees more promise in another gene-editing approach with less off-target editing, called TALEN, to treat diseases, which, though more difficult and expensive to use, he thinks may be safer.

All three agree, though, that gene editing will play a key role in the future of medicine. In his own research, Xu works to develop technologies that could deliver gene therapies to different organs, not just the liver, using the same kind of lipid nanoparticle. He hopes this new advancement will be followed by technologies that can target other organs. He also sees the potential for CRISPR to address other incurable human diseases, like Huntington’s and Alzheimer’s, that may have genetic components.

“If we can use CRISPR to treat those diseases,” he says, “it can actually bring great benefit to society.”