A Golden Goose award just recognized how poultry enhanced our understanding of B and T cells. 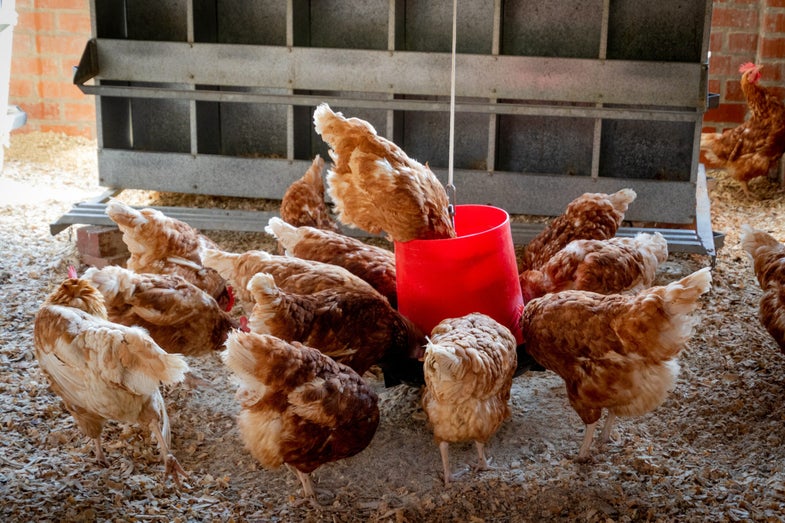 Children were dying, and pediatrician Max Cooper couldn’t understand why. They had plenty of plasma cells, which he knew produced antibodies, but his patients who were suffering from a rare hereditary disease called Wiskott-Aldrich syndrome were still failing to fight off simple herpes infections. By the early 1960’s, we had invented lasers and video games, but were still missing a vital piece of understanding about how our bodies recognize, attack, and remember foreign invaders.

Cooper didn’t know it at the time, but the key to cracking the puzzle had already been published years before, to little fanfare, in the journal of Poultry Science. “That journal changed the world, says Gregg Silverman, a pathologist at the NYU Langone Health. Now, more than sixty years later, the research has won a Golden Goose award for its unlikely contribution to modern medicine.

The author, Bruce Glick, never set out to upend immunology. As a graduate student studying poultry science at Ohio State University in the mid-1950’s, he just really liked chickens. Or more specifically, a curious organ in their rear known as the bursa of Fabricius, after the 15th-century Italian anatomist who first described it. Thinking it might affect development, he surgically removed the organ from dozens of chicks, but couldn’t detect any changes as they grew. The bursa’s function remained a mystery.

Glick’s story might have ended there, had chickens not been such a hot commodity at Ohio State. Shortly after his experiment, Glick’s colleague Timothy Chang borrowed a few for a demonstration in his immunology course. He intended to show his students how injecting them with vaccines would produce defensive proteins known as antibodies, but a few weeks later the chickens embarrassed Chang when most of their blood tests returned negative results. No immunity.

“He came back and said, ‘you’ve spoiled my demo. Your chickens didn’t make antibodies,’” Cooper says.

Checking his notes, Glick realized that the few chickens who had developed immunity were the ones that happened to have their bursas intact, and immediately guessed that the organ must make antibodies in young chicks. “Glick put two and two together,” says Cooper. “They went back and repeated the experiment, and found that it correlated exactly with bursectomy.”

The message was clear: No bursa, no antibodies. Glick took his discovery straight to the magazine Science, but the editors rejected it for failing to explain the mechanism behind the phenomenon. Not one to brood, Glick published the bursa breakthrough in Poultry Science in 1956, where it promptly began to gather dust.

Cooper got a second lucky break via a game of medical telephone. He was puzzling over why his Wiskott-Aldrich children couldn’t handle what should have been straightforward viral infections, an observation that clashed with the emerging picture of the immune system. Cooper understood that a certain type of white blood cell, known as a lymphocyte, produced plasma cells, and plasma cells made antibodies — the virus fighters. Wiskott-Aldrich patients had plenty of plasma cells, but somehow their immune systems were failing to manufacture the final product.

“The picture was confusing,” Cooper says. “It didn’t fit very well with a single lineage. That’s when we went back to the chicken experiments.”

The missing piece, which was languishing largely unnoticed in Poultry Science, got to Cooper when some hormone researchers at the University of Wisconsin noticed the chicken paper and relayed it to Cooper’s advisor, Robert Good (an immunologist who would eventually perform the first successful bone marrow transplant). He’d been struggling to confirm a 1961 discovery that lymphocytes came from the thymus by removing the organ in rabbits, but hadn’t seen significant changes. Glick’s chicken experiment suggested a two-fold resolution to the paradox: remove the organs early, while the young animals’ immune systems are still developing, and consider the possibility that the immune system depends on two organs, not one (since chickens have thymuses as well as bursas).

Wanting to test the theory, Cooper took the thymus out of some chicks and took the bursa out of others, then wiped out any lingering immune cells with radiation. Once recovered, the animals fell into two neat groups. Bursa-less birds made no antibodies, as Glick had found, while thymus-less birds could produce some, but at reduced levels. Cooper’s experiment showed that both the bursa and the thymus affected antibodies, but in different ways. He proposed that each organ produced a different type of white blood cells, which would work together to fight off infection.

He was right, and a global theory of the immune system took flight over the next decade. Humans lack bursas, but, like all vertebrates, do have the two cell lines that chickens have, now known as T cells (for thymus) and B cells (for bursa, not bone marrow as many assume). In the fight against invaders, the B-cells are the foot soldiers. They make antibodies which attack incoming viruses and remember them for future battles. Meanwhile, T cells serve as generals. They direct B cell activity and carry out mercy kills on infected cells. Like Batman and Alfred, the two cell types rely on each other, and any explanation based on just one was always doomed to fail. The new theory gave immunologists a whole new way to think about immune diseases like Wiscott-Aldrich syndrome, where a mutated protein leads to ineffective T cells, breaking up the lymphocyte team.

Today, understanding the symbiosis between B and T cells has let researchers begin to hack the immune system just as understanding electrons let physicists hack electricity. On top of developing new types of vaccines, and treatments for autoimmune disorders, immune theory also paved the way for immunotherapies, a promising new way to treat cancer. And while Wiskott-Aldrich syndrome remains serious, new gene therapies have extended life expectancy by a factor of five, and bone marrow transplants have cured some children completely.

Despite underpinning it all, Glick’s lucky finding—which pathologist Stephen Sternberg once called “Nobel worthy“—has gone mostly overlooked. While it doesn’t come with a 2 million dollar purse, The Golden Goose Award, which celebrates unexpected eureka moments in basic research, highlighed Glick’s contribution, among others, during a ceremony on Thursday. And immunology researchers agree that the recognition is long overdue.

“Everything has really been revolutionized by his simple observation,” NYU Langone’s Silverman says. “It altered our understanding of biology.”