This chart shows how far we’ve come in fighting cancer

Five good trends and the stories behind them. 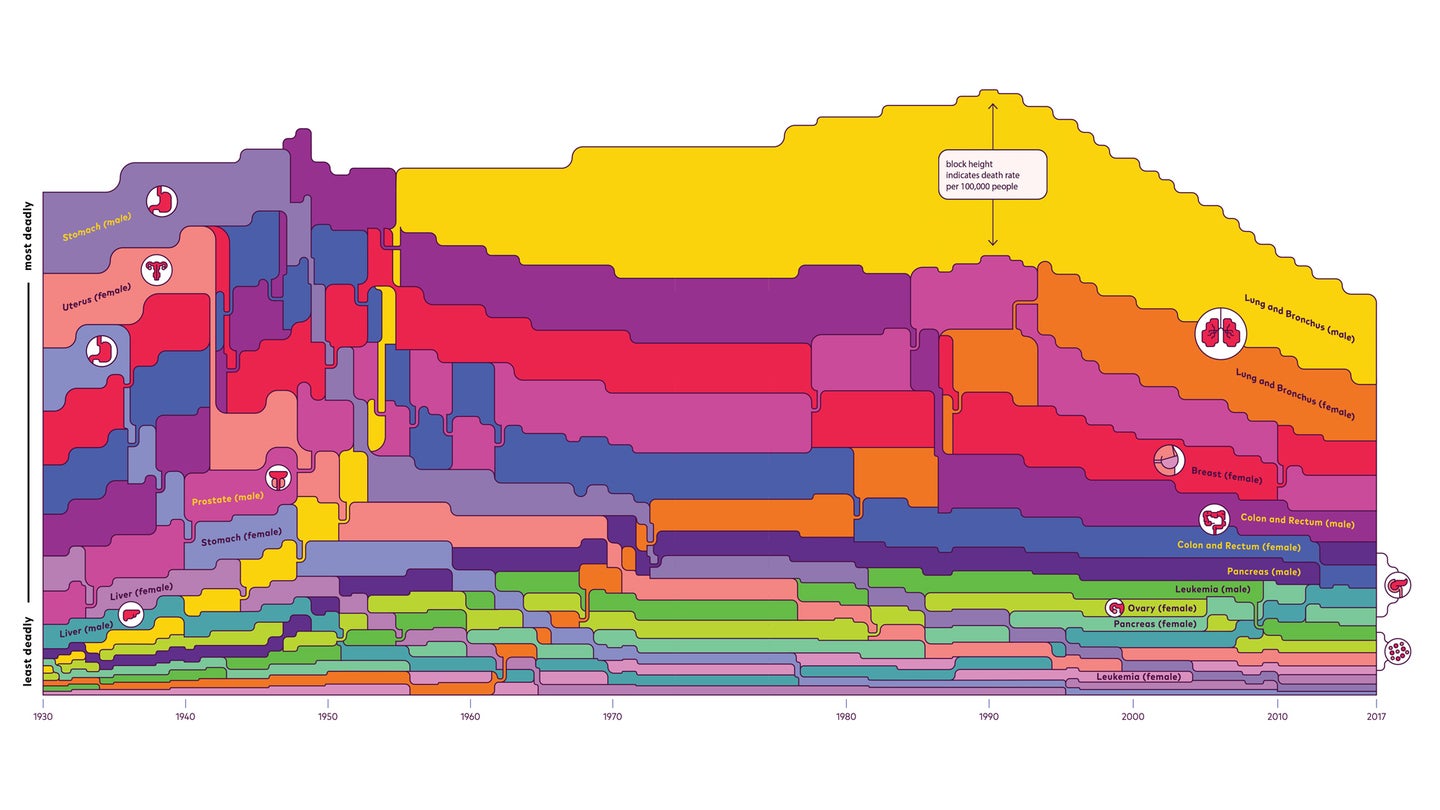 For much of the 20th century, cancer was an unspeakable diagnosis. Doctors often wouldn’t tell patients about their illness because they generally couldn’t treat it, and they considered it unethical to take away a person’s hope. The equation began to shift when Richard Nixon signed the National Cancer Act in 1971, authorizing hundreds of millions of dollars in research funding. Today, while the overall number of cases is increasing (we live longer and are less likely to die from other diseases), biologists and oncologists have made some incredible strides. New screening techniques, genomic sequencing, and tactics like immunotherapy and stem cell treatments have saved lives. There’s still work ahead—Black men in particular are more likely to die from many major cancers than their white counterparts—but zooming in on a selection of these malignancies shows how far we’ve come.

Click here to view a large version of the chart

Before cigarettes came into vogue, this malady was rare. Today, it kills more than 150,000 Americans a year. But regular CT scans for smokers, which doctors use to identify tumors early, save thousands of lives annually. A decline in smoking rates, from 40 to 14 percent over the last 50 years, has helped too.

In 1930, this cancer was five times more likely to kill than it is today. That’s partly because we now recognize one of the key symptoms: unusual vaginal bleeding in postmenopausal patients. The birth control pill may also reduce risk, while hormone therapy and surgery offer potential treatment options.

Rates of this disease have declined almost every year since 1930. One reason: New antibiotics can treat Heliobacter pylori infections, which trigger inflammation that ups cancer odds. To avoid radical surgery, researchers are working on ways to identify the illness early, when less invasive options might work.

Ancient Egyptians thought this ailment was incurable. But post-World War II, researchers refined chemotherapy and radiation to better kill cancer cells. Hormone-blocking drugs can now cut the chance of recurrence. If all else fails, meds that stunt tumor growth can prolong life by months or years.

This affliction is rising in younger Americans, but it typically strikes adults older than 65. Fortunately, it’s more treatable than ever. During routine colonoscopies, doctors can remove polyps before they develop further. If they find cancer, surgery can still be effective if the tumor hasn’t metastasized.