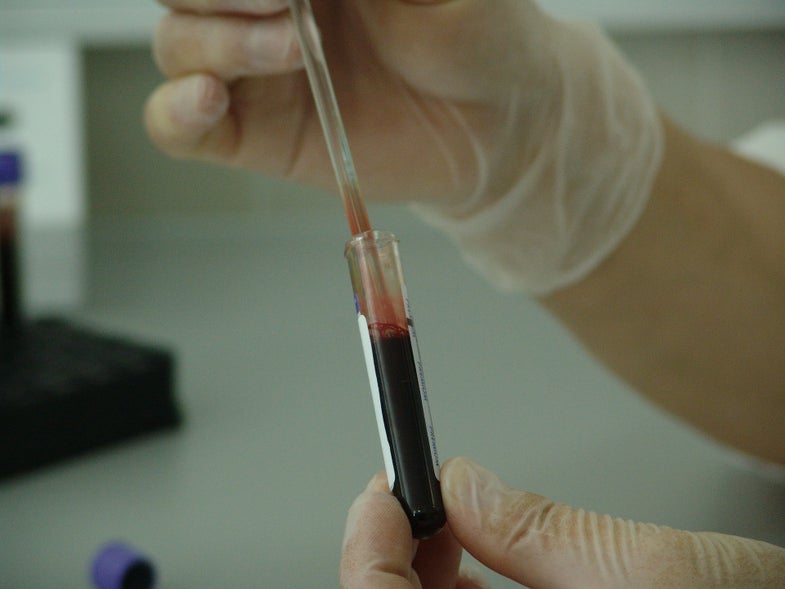 Today, the Food and Drug Administration approved a brand new type of cancer treatment: One that employs the body’s immune system—a method known as immunotherapy—to fight cancer. This approval marks the first use of gene editing to treat disease in the United States. For now, the therapy (initially called CAR T-cell immunotherapy and now named Kymriah by Novartis), is approved to treat children and young adults (up to age 25) with a recurrent form of the the blood cancer called acute lymphoblastic leukemia (ALL).

Despite its restricted use, this treatment marks a new era for cancer treatment. The therapy is unique and customized: Each patient’s own cells are re-engineered in a lab to fight cancer and sent back into their bodies to go to work. With more research and clinical trials, which are currently ongoing, this personalized therapy has the potential to treat a wide variety of blood and solid tumor cancers.

What is the therapy and how does it work?

The treatment is known in the medical community as CAR T-cell therapy. It involves removing some T-cells—a type of white blood cell—from a patient’s blood. Then researchers tweak the outside of each cell in the lab by adding a receptor called CAR (chimeric antigen receptor). When the altered T-cells are infused back into the body, these receptors help them find and kill cancer cells.

CAR T-cell therapy was invented by a group of scientists, including Carl June from the University of Pennsylvania, about a half decade ago. It hit the public eye when doctors used it on a young girl named Emily Whitehead, a then six-year-old with a relapsed and aggressive form of ALL. The experimental treatment worked—Emily is now 12 and cancer-free—and sparked a number of clinical trials and partnerships with drug companies, including Novartis.

When CAR T-cell works, it really works. June told Popular Science during a 2016 interview that these drugs are so good at finding and attacking leukemia cells that he calls them “killer T-cells.” He recalled one patient who didn’t see improvement until about one month after he received his engineered T-cells. Then, all of a sudden, his condition improved drastically. When doctors traced which T-cells were involved, they found that every engineered CAR T-cell in his body had descended from just one single transfused cell. “We infused 100 million into him,” said June, “and just one of them did all the heavy lifting.”

Why is it so different from other cancer treatments?

Traditional therapies like chemotherapy and radiation only target the cancer cells and tumors themselves. You need different types of drugs depending on the type of cancer, and once you stop giving a person the treatment, it quickly leaves the body or stops working. This treatment, and all immunotherapies to a certain extent, target the person’s immune system and harness it to fight the cancer. In theory, it works just like a vaccine: once the immune system is coaxed into fighting the unhealthy cells, it should keep fighting them for a lifetime. That’s the idea, anyway—there’s still a lot of research to do.

The therapy is not without its dangers. One of the biggest obstacles doctors and researchers face is handling the immune response that comes with the treatment. When you catch the flu or another type of infection, the fevers, aches, and pains that you get are not from the invading bacteria or virus itself, but from your immune system revving up and fighting against it. The same thing happens with this treatment (and to a varying degree with other immunotherapies, too).

When a person receives engineered T-cells, the jolt to their immune system causes extremely high fevers and increases in proteins involved in inflammation. This can be very dangerous. But if the immune system doesn’t generate this massive response, that means the treatment isn’t working. So doctors are working now to figure out a way to deal with and control these side effects without compromising the effectiveness of the treatment.

Can it help all cancer patients?

Right now, the drug is approved only for ALL at a small number of cancer centers across the country, and under very specific conditions: For people aged three to 25 with relapsed ALL that has not responded to conventional therapy. Since leukemia is a cancer of the blood, it’s relatively easy for engineered T-cells delivered via blood infusion to find, invade, and kill the diseased cells. That’s why doctors have been focusing on that cancer, as well as other types of leukemias, before trying to push the treatment forward for cancers in other parts of the body.

Figuring out how to use the treatment on other types of cancer, including ones outside the blood that create solid tumors, is the next big hurdle for scientists to clear. The problem, according to June, is that in cancers that create tumors, the bad cells are really good at keeping invaders out of the growing mass. In pancreatic cancer, for instance, the cancer cells basically build a wall around the tumor, which poses a problem for T-cells trying to get to it. That’s also true for brain cancers. To make CAR T-cell therapy a viable option for those patients, scientists will have to figure out how to safely break down those walls.

In principle, June said, all forms of cancer can be targeted by immunotherapies. We just need to figure out how to get the treatments where they need to go—and how to keep cancer patients safe from their own immune systems.