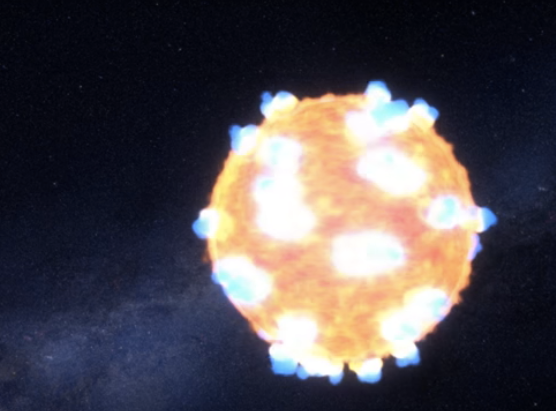 Talk about a big bang. In the animation above, you can see a star exploding. Though the animation is an artist’s interpretation of the event, it is based on real data collected by NASA’s Kepler telescope, which has been scanning wide swaths of the sky looking for rare events like this one.

Shockwaves (aka a “shock breakout”) like this only last for 20 minutes, so it was really exciting for astronomers to capture the moment, which they recorded as a sudden flare of optical light from a distant star.

The shock breakout is the initial flash of brightness from the explosion that precedes the big event, as the star gets brighter and bigger over about two weeks. The star modeled in the animation above is known as KSN 2011d, a red giant 500 times larger than our sun, and 1.2 billion light years away. For comparison, the closest star system to our own solar system is about 4.2 light years away.

Though explosions of distant, massive stars might seem far removed from life on Earth, the fact is that there is a connection.

“All heavy elements in the universe come from supernova explosions. For example, all the silver, nickel, and copper in the earth and even in our bodies came from the explosive death throes of stars,” Steve Howell, a project scientist on NASA’s Kepler mission said in a statement. “Life exists because of supernovae.”

The Kepler telescope was launched in 2008 and collected data on a single wide field of view of space until 2013, when it failed. But it got a new lease on life as the K2 mission when NASA scientists managed to reboot the telescope later that year. Now, the mission spends 83 days at a time monitoring a single area before rotating and repeating on another area looking for exoplanets and astronomical events, including exploding stars.