In one of the most isolated places on Earth, sealed off for 15 million years, life teems. Some of it may be animal life. 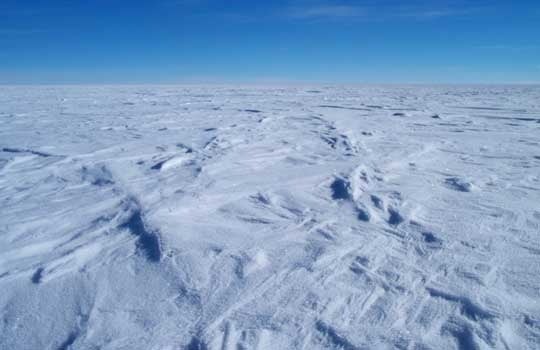 A new study of Antarctica’s largest sealed lake has found it contains genetic material from thousands of species of bacteria, fungi and other microscopic life.

The diverse critters researchers found offer clues to what the lake water is like. Why do scientists need these clues? Well, the lake, called Lake Vostok, is covered by a 2.5-mile-thick glacier. Scientists think it’s been sealed off from the Earth’s atmosphere for about 15 million years. A decades-old effort to drill through the ice only touched water in 2012.

The conditions in Lake Vostok could be as harsh—and is nearly as mysterious—as those in water identified on other planets. Many of the things that live there must have come in from the air or potential connected seas millions of years ago and then evolved, cut off from the rest of the world.

There’s now new evidence that Lake Vostok contains layers of salt and fresh water. It may also have hydrothermal vents at the bottom, pumping energy and nutrients into the buried lake. There may even be some complex, multicellular animals in there, although the evidence for that is preliminary, for now.

One of the greatest difficulties in studying Lake Vostok is keeping samples from the lake from getting contaminated by living things in the air, researchers’ tools and everything else. In a paper they published last week, this latest research team, made up of biologists from Bowling Green State University in Ohio, detailed how they tried to keep their samples uncontaminated. Now that the paper is published, it’ll surely face continued scrutiny from other scientists about possible sources of contamination.

For this study, the Ohio biologists examined ice gathered from just underneath Lake Vostok’s glacier, at the lake’s southern edges. Scientists think such ice, called accretion ice, represents water from the surface of the lake that froze to the glacier. Getting accretion ice isn’t as difficult as drilling through the glacier in search of deeper liquid water, so it’s actually been available for study since the 1990s. However, biologists didn’t previously have access to the genetic analysis techniques they do now. The techniques weren’t invented yet.

After comparing the genetic material they found in Lake Vostok to a database of the known microbes on Earth, the biologists found a remarkable variety of critters. There were organisms known for living in salt water, fresh water, super-hot water and even in the guts and other body parts of tube worms, fish and other animals. There were low amounts of genetic material that appeared to come from animals such as a microscopic crustacean, a marine bivalve and a small sea anemone.

The microbes’ presence suggests several things about the history of Lake Vostok, the Ohio team wrote in their paper, which was published in the journal PLOS ONE.

Vostok is a freshwater lake, but it may have originally been connected with the ocean and still contain layers of salt water, they said. The thermophilic organisms may mean that there’s some hydrothermal activity inside Lake Vostok, whose bottom is a rift valley that could well be thermally active. Volcanic vents and other activity may add energy and nutrients into the lake that can’t come in from the surface.

Meanwhile, the animal-dwelling microbes don’t necessarily mean there are actually animals in the lake. There’s no evidence that microbes couldn’t have actually come from animals, but there’s not yet much other evidence of animals in there. Lake Vostok’s environment is pretty extraordinary, so scientists would need more signs before concluding that animals live in it. Animal-dwelling microbes often also live by themselves (so lonely!) in soil, the Ohio researchers wrote. At the same time, if Lake Vostok does have thermal vents, they could support complex life.