Back in 2001, NASA launched a mission named Genesis toward the sun to collect solar particles streaming from our star... 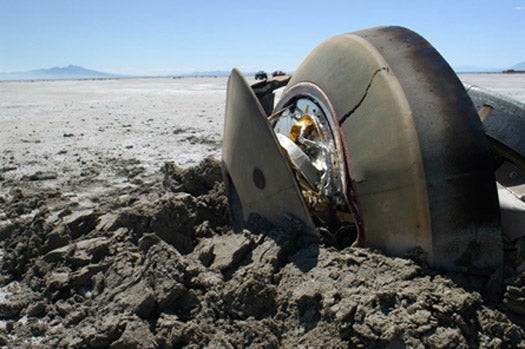 Back in 2001, NASA launched a mission named Genesis toward the sun to collect solar particles streaming from our star and return them to Earth. Genesis arrived back on Earth right on time in 2004, but all didn’t go according to plan. When Genesis’s parachute failed, the spacecraft crash landed in Utah, spilling it’s contents across the ground. But seven years later scientists are still picking up the pieces, and making big discoveries as they continue to sift through the wreckage.

The most recent finding: Earth’s chemistry is quite different from the sun’s. That may sound obvious, but it actually goes against what cosmologists thought. When our solar system formed 4.6 billion years ago, it did so from churning disk of dust and gas. And because everything came from the same stuff, researchers assumed that the inner solar system would have a shared chemistry.

It turns out that’s not entirely the case. According to the researchers still skimming evidence from Genesis’s wreckage, the Earth is enriched with two isotopes of oxygen and one isotope of nitrogen compared with the sun. That shakes up our origin story quite a bit.

To figure all this out, scientists had to invent whole new methods of cleaning the leftovers of Genesis to remove Earthly contamination from the particles captured in space. It wasn’t easy (it took this long), but teams in America and Europe have managed to isolate pristine samples and analyze them, finding that Earth is richer in both oxygen-17 and oxygen-18 than the sun. The nitrogen disparity is even more pronounced: the sun is roughly 40 percent poorer in nitrogen-15 than the Earth.

Now cosmologists have to figure out why. They have some theories, but in the meantime Genesis science continues to slog along slowly. There were 18 measurements researchers planned to analyze from Genesis’s haul before the crash slowed their progress. Seven years later, they’ve checked off about five and are still working on the rest.