Future Spacecraft Could Protect Crews With Walls Made of Water

Walls of water could protect astronauts from radiation while recycling their bodily waste and purifying the air, under a new... 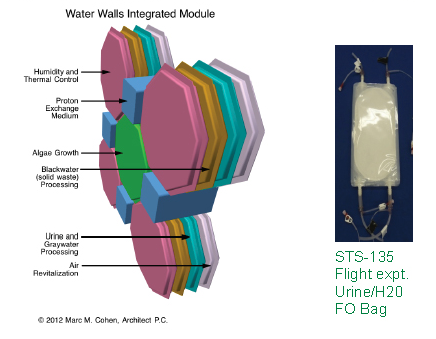 Walls of water could protect astronauts from radiation while recycling their bodily waste and purifying the air, under a new NASA concept. The “Water Walls” design takes a page from mother nature and uses water for passive protection.

The concept’s formal name is Highly Reliable and Massively Redundant Life Support Architecture, and it’s part of NASA’s Innovative Advanced Concepts program, meaning it just received funding for further study. It would use a framework of hexagon-shaped polyethylene bags serving as the walls of a spacecraft. They’d be filled with various bacteria, algae and filters to clean and purify water and air and provide food — algae as food may not be tasty, but it would be nutritious — and shield the spacecraft’s occupants from space. The concept is by Michael Flynn at NASA’s Ames Research Center.

“Nature uses no compressors, evaporators, lithium hydroxide canisters, oxygen candles, or urine processors,” Flynn points out. Earth’s atmosphere and water are instead renewed through passive processes, and this is what he proposes for future spacecraft.

The only mechanical element would be the pumps required to move water into the appropriate places. The system would contain at least five separate elements: Gray water processing, for urine and shower water; black water processing for solid waste; air processing to remove CO2 and restore oxygen; food growth using algae; and radiation protection. Water has been proposed in the past for the latter, but this system is unique because it integrates water’s other uses, too.

Spacecraft would carry spare bags to replace used or depleted ones, and the whole thing is massively redundant, to use Flynn’s phrase — a far cry from current life-support systems, which rely on mechanical instruments and can fail. NASA approved $100,000 for further development of this concept.