Mars 2020 Rover May Have A Little Flying Helper Drone

Eyes in the Martian sky 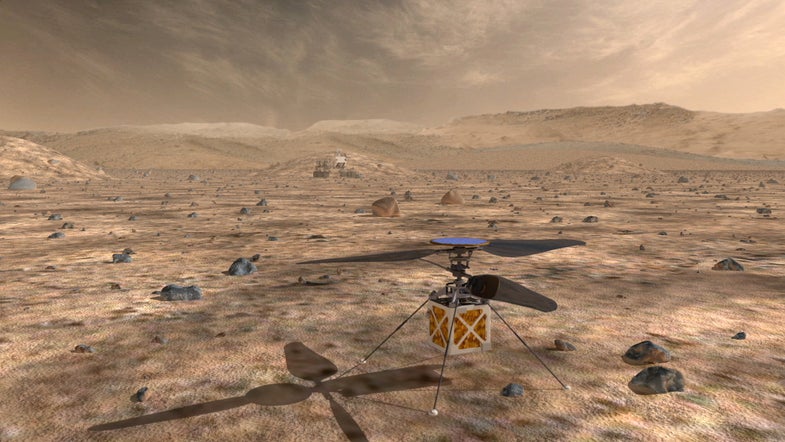 In April 2009, the Spirit rover got stuck in a sand trap on Mars. Try as it might, its wheels couldn’t gain enough traction in the loose sand to free itself, leading to a sad, slow death for the rover. NASA doesn’t want that to happen again.

Although the Curiosity rover is trucking along just fine so far, the space agency might take extra precautions on its next rover. Space News reports that NASA’s Jet Propulsion Laboratory is designing a helicopter-like drone that could scope out the landscape ahead of the Mars 2020 rover, to guide it to potentially interesting locations and help it avoid potholes and sand traps. The drone could triple the distance the rovers traverse in a day.

The Mars 2020 rover will collect samples of dirt and rocks, and cache them where future missions could pick them up and return them to Earth for testing. The drone hasn’t been officially confirmed as part of the mission, but JPL aims to test a full-scale prototype of the 2.2-pound, solar-powered helicopter next March.

“[W]e’re going to put it in a chamber and simulate, exactly, the Mars atmosphere,” JPL Director Charles Elachi told Space News. “We have done some tests and we’re confident it will [fly].”

Flying the helicopter in a Mars-like environment could be challenging, since the red planet has a much thinner atmosphere, which means the drone might have to work harder to keep aloft.