The rover is looking for a new, gentler route to Mount Sharp. 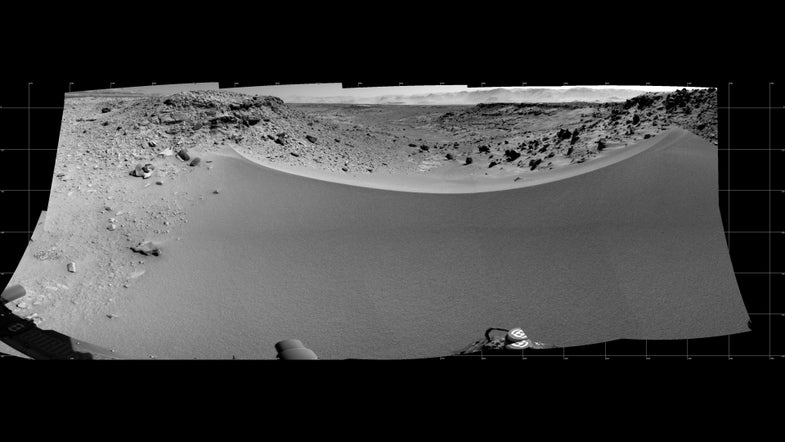 On January 30, NASA’s Curiosity rover took stock of a Martian sand dune while its engineers decided whether to cross the dune on the way to Mount Sharp. This is what it saw.

The last time few times we heard from Curiosity, it had examined an area on Mars that once held a lightly briny lake. [Correction: that was Opportunity.] Now, Curiosity is headed to Mount Sharp, a journey that will take several months.

Dunes can be treacherous to rovers. In 2009, NASA’s Spirit rover got caught in a sand trap in a dune. NASA engineers were never able to free it. Nevertheless, Curiosity’s handlers are considering a dune crossing because driving over Mars’ rockier surfaces has torn up Curiosity’s aluminum wheels, according to a NASA statement. Universe Today put together several photos showing the punctures.

NASA has dubbed the proposed dune crossing “Dingo Gap.” The dune itself is about three feet high. The Curiosity team found Dingo Gap after analyzing images from the Mars Reconnaissance Orbiter flying above the planet, but will make its next decisions based on images from Curiosity’s own cameras, like this one.