This Futuristic Ion Engine Could Carry Our Luggage To Mars

But its first stop will likely be an asteroid 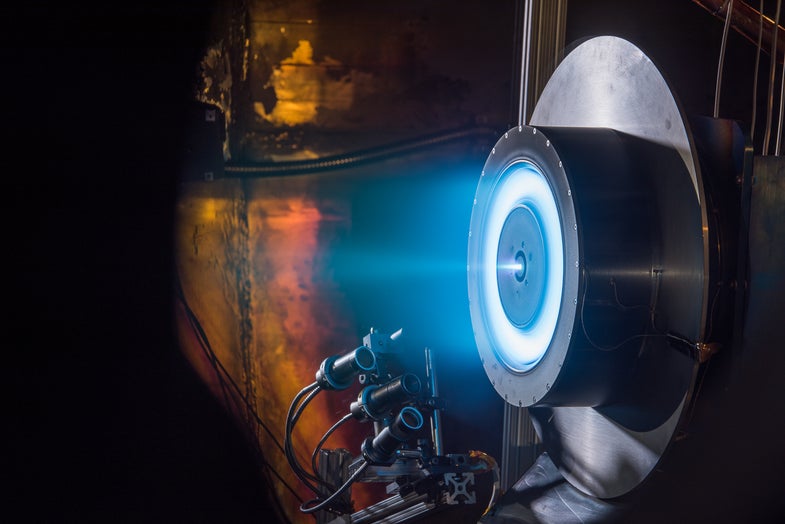 When the first astronauts get to Mars sometime in the 2030s or 40s, they’re going to need more supplies than can fit in a backpack and rolling luggage. Their habitat, food, rovers, and return vehicle will all have to be pre-delivered. To do all that hauling, NASA is developing an ultra efficient spacecraft engine, and this week the agency announced that Aerojet Rocketdyne will be the company to manufacture it.

The cargo truck of the solar system will use solar power to charge up and expel xenon gas from its backside. The method is said to be up to 10 times more efficient than current chemical propulsion systems. Aerojet Rocketdyne has a 36-month contract to produce the engine, and after that the space agency plans to test fly it on a mission to an asteroid. Later it might deliver cargo and maybe even people to Mars.

The “solar electric propulsion” engines work somewhat like how the Dawn spacecraft’s engines work. The spacecraft’s solar panels will generate electricity. Those electrons will get trapped in a magnetic field and then used to ionize the xenon propellant. The magnetic field also generates an electric field, and together they’ll make those charged xenon particles shoot out of the spacecraft at high speeds, thrusting out a cloud of plasma that moves the spacecraft forward.

Whereas the Dawn spacecraft’s engines have 2.6kW thrusters, Aerojet Rocketdyne’s engines will have 13kW thrusters. If it works, it will provide a powerful yet efficient way to explore deep space.

Ion propulsion has a lower thrust than chemical means, but it’s a lot more fuel-efficient and can continuously accelerate the spacecraft. Whereas a chemically driven spacecraft could reach Mars in as little as 8 or 9 months, this method might take up to 36 months. But because the spacecraft won’t have to carry as much fuel to get there, that frees up space to carry more cargo. 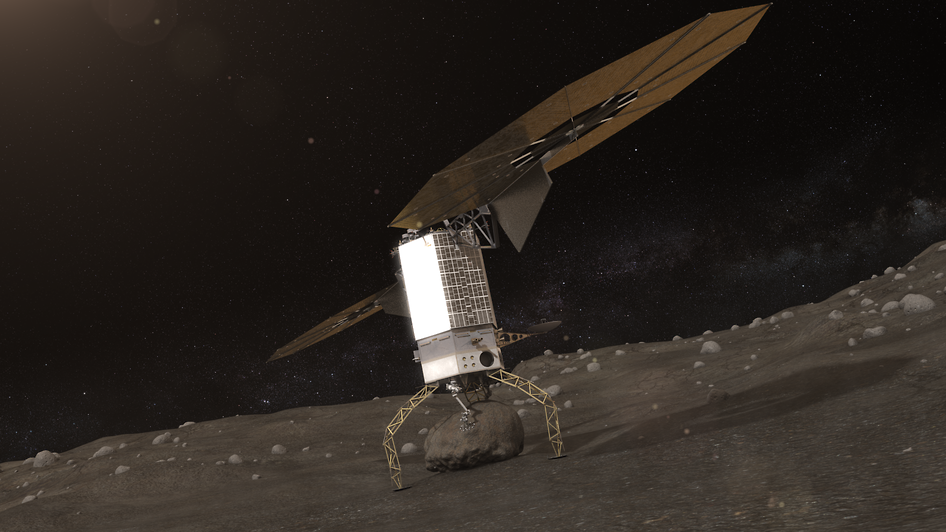 The Asteroid Redirect Mission will be driven by Aerojet Rocketdyne’s solar electric propulsion system. The spacecraft will travel to an asteroid and steal a boulder from it. (Illustration)

Because solar electric propulsion is slower, it’s not likely to be used to carry humans into deep space, unless it’s used in combination with chemical propulsion to speed things up.

As a test drive for Mars, NASA is planning to launch the engines in the 2020s. During the Asteroid Redirect Mission, the engines will propel a spacecraft to an asteroid, where it’ll pick up a boulder and carry it into orbit around the moon. There, astronauts will rendezvous with it to test other equipment in development for the Journey to Mars (including the Space Launch System and the Orion capsule).

NASA says ARM could launch in 2021, and bring the asteroid boulder back into lunar orbit for astronauts to analyze in 2026.