Oscar Pistorius, whose prostheses were previously considered an unfair advantage, has been given the thumbs up to compete 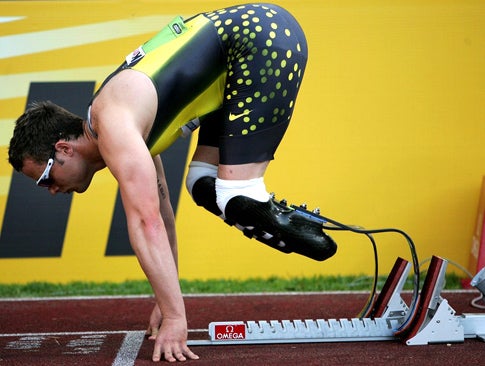 Oscar Pistorius's blade-shaped prosthetics were the focus of much debate. The International Association of Athletics Federations ruled him inelgible to compete in the Olympics, claiming his false limbs were an unfair advantage. In May, the Court of Arbitration for Sport overturned the ruling, though Pistorius's time trials eventually failed to win him a spot on the South African team.
SHARE

It’s about time. After an excruciating and absurd debate, double-amputee sprinter Oscar Pistorius will be allowed to compete in the Olympics. Pistorius won his appeal to the Court of Arbitration for Sport today which immediately overturned an asinine ruling by the International Association of Athletics Federations which stated Pistorius gained an unfair advantage from his prosthetics.

“I am ecstatic,” Pistorius told reporters in Milan, Italy. “When I found out, I cried. It is a battle that has been going on for far too long. It’s a great day for sport. I think this day is going to go down in history for the equality of disabled people.”

Two days of testing in January at the German Sport University’s Institute of Biomechanics at Cologne yielded data showing that to run at a given speed, Pistorius required 25% less energy expenditure than his able bodied peers. It further quantified Pistorius’s prostheses as 30% more efficient than a human ankle. The panel wasn’t convinced.

“The panel was not persuaded that there was sufficient evidence of any metabolic advantage in favor of a double-amputee using the Cheetah Flex-Foot,” CAS said. “Furthermore, the CAS panel has considered that the IAAF did not prove that the biomechanical effects of using this particular prosthetic device gives Oscar Pistorius an advantage over other athletes not using the device.”

Whether the panel went conveniently blind to the science or whether holes truly exist in the analysis is irrelevant. What could less represent the Olympic spirit more than banning Pistorious?

Unfortunately for Pistorius, his toughest challenge might still be ahead. He’ll need to cut 1.01 seconds of his personal best of 46.56 to qualify for the 400-meter race in Beijing. Should he not hit that mark, South Africa could select him to the relay squad or as an alternate.

“A lot of the time we’ve had this year we’ve devoted to the court case,” Pistorius said. “Now when I get home, my time can be dedicated to training. I am going to have to start thinking about getting my body in shape in order to run those (qualifying) times. I am hopeful there will be enough time but it is going to be very difficult.

Ironically, in the midst of this worldwide hullabaloo, another amputee has quietly qualified for the Olympics in 10-km swimming. Fellow South African Natalie Du Toit lost her leg in 2001 and competes without a prosthetic which begs a sad but necessary question.:How long until some governing body requires testing to quantify whether her reduction in drag is unfair? We’re the last people to admit, but it’s true: Sometimes the science shouldn’t matter.