The Mars Curiosity Rover Is Starting To Make Its Own Decisions

The robot got a sort-of, almost, artificially intelligent upgrade 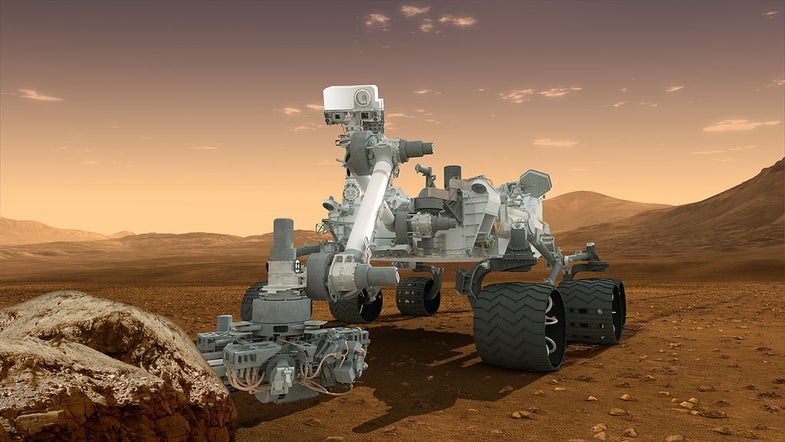 NASA gave its favorite pet Martian a little taste from the tree of life this week. The Mars Curiosity Rover can now autonomously decide which rocks to zap with its onboard laser.

Using the Chemistry and Camera (ChemCam) instrument, the rover chooses a target and fires laser pulses, using its spectrometers record the light signatures that chemical elements produce. In combination with Autonomous Exploration for Gathering Increased Science (AEGIS) software from the Opportunity rover’s days, Curiosity can select where to point its laser based on the size and color of a rock.

While scientists are commuting or trying to reach inbox zero, Curiosity’s hard at work. “This autonomy is particularly useful at times when getting the science team in the loop is difficult or impossible — in the middle of a long drive, perhaps, or when the schedules of Earth, Mars and spacecraft activities lead to delays in sharing information between the planets,” robotics engineer Tara Estlin, the leader of AEGIS development at JPL, said in a press release.

In the same release, NASA notes that for now, human engineers are still selecting most of the ChemCam targets. ChemCam data could show how Mars’ environment went from potentially fertile to barren and unsuitable for biological life as we know it.

It’s still perfectly suitable for the machines, of course. Let history’s records show that we were too busy sitting in traffic and pointless meetings to notice when Curiosity started building minions of its own, colonizing Mars years before we set our fleshy feet down on its surface. When the rover surveys its planet and sees all that it has made, may it proclaim that It Is Good. And when we show up in 2030, may the world Curiosity built have mercy on us.