Keeping those satellites in motion 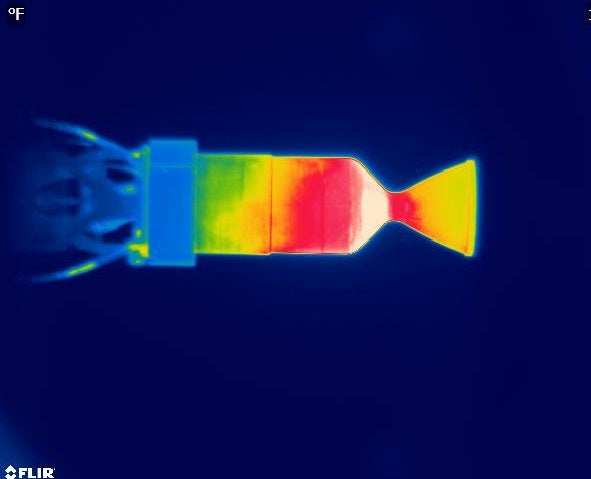 Once satellites reach their orbit, they sometimes need to change altitude or orientation. And to do that, they typically use thrusters that are powered by hydrazine. Hydrazine, while good at its job of moving bulky objects through space, is also rather toxic chemical and highly reactive. So, space agencies have been on the lookout for a replacement.

Yesterday, NASA announced that they’ve completed testing on two different green propellant options. One, known as LMP-103S, was tested at the Marshall Space Flight Center in Huntsville, Ala. The team fired five and 22 Newton thrusters in different conditions, monitoring them with infrared cameras. While those thrusters might seem puny (in comparison, the space shuttle had about 7.8 million pounds of thrust at launch), without gravity holding them down, the power goes a long way.

In a statement from NASA, the lead engineer for the LMP tests, Christopher Burnside said, “They performed quite well, providing performance at comparable levels to today’s hydrazine thrusters. It’s always great to put thrusters through the paces in an environment that simulates operational conditions.”

The other green propellant subjected to hot-fire testing was the equally-catchy AF-M315E, which was developed by the Air Force Research Laboratory. This one will take part in NASA’s Green Propellant Infusion Mission, which is scheduled to launch in 2016. The GPIM team tested the propellant with one Newton thrusters (which will be used as part of the mission) and 22 Newton thrusters. Once launch time comes, the propellant will be tested on a small satellite during a two-month long demonstration in space.

While these were first hot-fire tests in the United States, ESA has also been looking into alternative satellite propulsion methods like LMP-103S, particularly with their Clean Space project, which aims to reduce the environmental footprint of space exploration.

Since both of these alternative propellants are less dangerous to handle and take less time to process, NASA says they could cut down on costs, and as an added bonus, AF-M315E is much denser than hydrazine, meaning more of it can be stored in containers.