In super-cold temperatures, it's more like skiing on sand than snow. 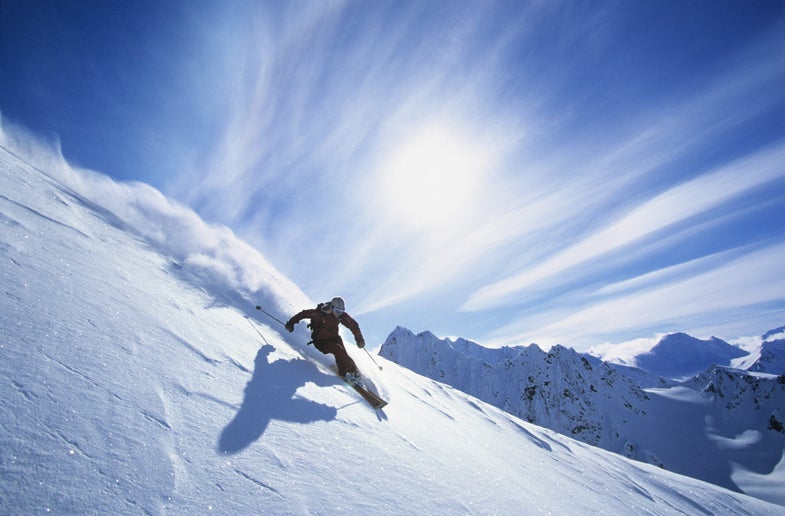 “Alpensia” sounds like a venue straight out of Frozen, but you won’t find any summer-loving snowmen there—just really cold Olympians. The ski resort in Pyeongchang, South Korea is among the coldest ever to host the Winter Games, and the bitter temperatures have claimed some unexpected casualties: skis.

During the lead up to the games, athletes and trainers told Reuters’ Peter Rutherford they were trashing their skis during practice runs. The slopes were so frigid as to render high-tech equipment worthless. But why?

Turns out that in the right temperatures, snowflakes can turn from fluffy sparkles into razor-sharp, ski-destroying spikes. And for downhill skiers, who rely on the physics of friction to zip down the slopes, super-cold snow can spell disaster for their most important accessories.

It may not look like it, but speedy skiers are bound to the laws of physics like the rest of us. Even as their bodies zip downwards with the help of gravity, they face friction that can impact their speed and, in extremely cold temperatures, their skis.

You’d think friction would simply slow skiers down, but it can actually make skis glide across the snow more quickly. As the skis drag, they melt a small amount of snow beneath them. This isn’t a result of pressure, says Libbrecht, but rather of heat. That melted snow acts like a lubricant and makes the skis slip even more quickly.

But heat is just part of the story—and physicists aren’t exactly sure how the rest of the tale goes. For years, they’ve debated the exact mechanism of snow, ski, and skate friction. Right now, the prevailing theory is that ice and snow melt a tiny bit as soon as they’re formed, creating a quasi-liquid film that gets friction going the second a ski or skate touches them.

That film acts like a lubricant. Add Olympians’ skis to the mix and you get even more speed. They’re made of high-tech composite materials designed to absorb racing wax, which creates more lube and, hypothetically, even faster runs.

Sounds speedy, right? Sure…until things get really cold. “The colder it gets, the harder it is to melt that layer of ice,” Libbrecht explains. And when temperatures get below about -15°C (just below 16 °F), snowflakes tend to be extremely sharp—the equivalent of tiny, crystalline razors.

“It’s not like a piece of steel slicing through you,” he clarifies, but the sharpness of the flakes combined with the slower melt rate of a cold day is enough to damage skis. What should be a slippery experience ends up being more like skiing over sand, with no layer of lube to protect skis. Instead, the cold, spiky snowflakes damage the equipment in a phenomenon known as base burn.

Your average skier might try for another run. But for an Olympian, who may win or lose a race by just a fraction of a second, that’s obviously not an option.

Olympic athletes show up at the Winter Games with tons of skis under the best of circumstances—up to 70 pairs for some competitors. But when it’s as cold (and spiky) as it is in Pyeongchang, they might just wish they’d packed a few more for good measure.