Otters are too small, whales are too big, and seals are just right

Why size matters in the ocean. 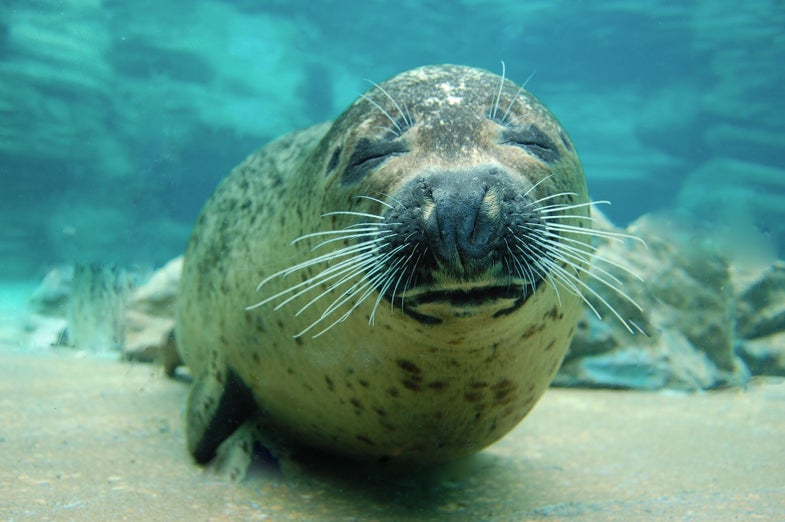 Conventional wisdom holds that whales got so big simply because they could. Water makes you buoyant and oceans are big, and that lack of constraint seems to have allowed mammals to grow to spectacular sizes.

But new research suggests there might actually be more constraints on aquatic mammal size—not less. To figure it out, researchers looked at 3,859 living mammals and 2,999 fossil species, noting how body size had changed as the mammalian lineage evolved. They published their results on Monday in the journal PNAS.

Though certain giant whales and otters are exceptions, a preponderance of the marine mammals lie just above the 500 kilogram bodyweight mark (that’s 1,102 pounds). That’s true regardless of the body size of their terrestrial counterparts. Dogs, giraffes, and moles all belong to similar evolutionary groups as seals, whales, and manatees, yet the aquatic versions vary a lot less in size. That suggested to the researchers that this was not just a matter of water allowing mammals to get bigger. They seemed to be drawn to a particular weight—500 kg.

Their data suggest a simple explanation for this strange uniformity in size: ocean water steals your heat.

Water is exceptionally good at pulling body heat out of you. The technical term for this is high specific heat. A substance’s specific heat is how much is required to raise the temperature of one kilogram of the substance by one degree kelvin (or 2.2 pounds by 1.8°F). Imagine flames beneath pans holding either water or olive oil. The olive oil will heat up pretty fast, whereas the water will take quite a while (as anyone who has tried to cook pasta in a hurry knows). Olive oil has a specific heat of 1.97, whereas water’s is 4.19. It takes almost twice as much energy to heat the water.

This means the water of the sea can absorb a lot of heat from bodies floating in it without changing its own temperature much. If the water around you warmed quickly, you’d be surrounded by a thin layer of warm water and wouldn’t lose heat so fast. Since it doesn’t, your body just keeps cooling off.

So basically, a mammal must be fairly large in order to not just lose all of its body heat to the surrounding water. Many aquatic mammals evolved blubber to prevent heat loss, but this paper suggests they also just got bigger. The minimum feasible body size in water is, according to their estimates, roughly three orders of magnitude larger than the minimum on land.

The 500 kg mark is large enough to stay warm, but not so large that you have to consume an enormous amount of food to power your metabolism. This is even true of many whales that eat similarly to dolphins or seals, meaning they feed on larger fish and other sea creatures. You have to expend a lot of energy finding that food and you may not get a lot of it, so being truly giant is a risk underwater. Sperm whales seem to be about as big as you can get without developing a whole new way to eat.

That’s what baleen whales did, though. They only evolved to be so huge when they went from having teeth to having baleen, the big filter-looking things that allow them to suck in ocean life and expel the water, leaving only krill and tiny fish to go down the hatch. This is a much more efficient way to feed, since the hunting process is such a snooze, which allowed baleen whales to grow larger than their toothy brethren.

Otters are a bit more of a mystery. They only weigh up to 45 kilograms, or about 100 pounds—which is larger than their shrew counterparts on land, but is nowhere near as big as seals. The researchers aren’t totally sure why this is, though they suspect it may be because otters aren’t entirely aquatic. They live on river banks and on shorelines, and spend much of their life on land even though they’re also excellent swimmers and live many hours in the ocean. With one foot in each camp (almost literally), they could have ended up in the middle on body size as well.

Prior prevailing ideas held that animals heading into the ocean were simply no longer constrained by all that pesky gravity and limited space. If their size was due to an overall embiggening, we’d expect to see as much variation in body mass in the water as on land. But we don’t. We see a convergence, not just a set increase, which suggests that the old theories about buoyancy and habitat area are, at the very least, smaller factors in the equation than we thought.

All of this might seem a little irrelevant or even obvious, but let us not forget that sometimes science’s purpose is to explain what might seem irrelevant or obvious. We only find things out for sure by examining and testing them—otherwise, we’re just going on our intuition. Studies like this help us better how life works and doesn’t work. That knowledge might someday be parlayed into a biologically-inspired design for a spaceship or a diving suit or a submarine. Or, it might be knowledge for knowledge’s sake. Either one is just fine.

Note: This article has been updated to remove a sentence about water’s conductivity, which one of our excellent readers pointed out is incorrect. Thanks for keeping us honest!