Oaks are poised to thrive in a changing climate. 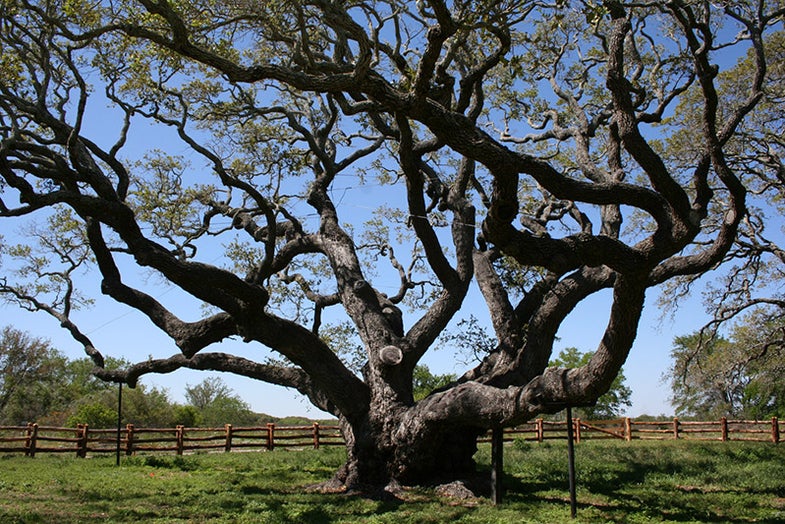 Hurricane Harvey first made landfall in the town of Rockport, Texas last Friday night. The 108 mph winds and more than 40 inches of rain destroyed houses, churches and schools. But a 1,100-year-old oak tree was left standing at Goose Island State Park.

“This is not the first hurricane it’s sat through,” says David Appel, a plant pathologist at Texas A&M University.

The “Big Tree” has a diameter of 11 feet and a circumference of more than 35 feet. The community of Rockport has appreciated the tree for more than a hundred years, calling in experts like Appel to help care for it. And it’s not the only tree that survived—many younger, less remarkable live oaks survived the hurricane. And, with the way the climate is changing, some of them may thrive there for another 1,000 years.

Areas that already have plenty of rainfall, like East Texas, should expect to see more. Trees that can withstand more extreme wind, temperatures, and fire could benefit from the extra water. In one experiment in Boston, researchers planted 12 different species of trees and watched how each dealt with increased heat. The researchers gave some a little more water than nature would provide, and other trees less. They found that the warmer temperatures made moisture more important. “A dryer year can really stress out the plants,” said Jeffrey Dukes, a forestry researcher at Purdue University and a leader on this project. “In a wet year, the plants can grow really, really well.”

These changes aren’t just affecting Texas. The habitats where oak trees are able to thrive are creeping up the states, while the areas where spruce and pine come out on top are shrinking, according to the U.S. Department of Agriculture.

“A lot of it is predictable,” says Dukes. “Not good news, but what we basically expected would happen in a changing climate.”

This is not the first time the oaks have dealt with climate change, though no change has ever occurred as rapidly as it is happening today. During the last Ice Age, 2.4 million years ago, glaciers pushed the oaks into a small region in what is now Florida. Then, 15,000 years ago, they expanded northward as the Earth began to warm.

Oaks have special genetic adaptations that allow them to continue multiplying throughout the unexpected. There are 225 species of oaks in Canada, the U.S. and Mexico. These species can mix to form fertile hybrids, while also keeping the original species separate. In the animal kingdom, this would be like mules—which are the offspring of donkeys and horses—becoming their own separate species, while donkeys and horses both continued to exist separately. This quirk makes it hard to breed oaks consistently—no one knows exactly what offspring will look like—but it makes them particularly prepared to adapt. Genetic diversity protects the larger group, because populations killed off by particular threats can be replaced by closely-related lineages that have developed resilience.

But climate change does pose at least a few dangers to oaks: pathogens and parasites. Winter’s lowest temperature continues to rise in most places around the U.S., and so bugs can survive where normally they would have frozen. Beetles, wasps, moths, funguses and bacteria are currently harassing trees all over the country. And, of course, the trees are vulnerable to more extreme droughts, like the one that threatened Goose Island State Park in 2015. That’s been the most dangerous event for the Big Tree in the past several years, says caretaker Jack Swayze of Davey, a tree consulting company.

Whatever the future holds, live oaks — and the Big Tree in particular — will no doubt continue to play a role in the Texas community. “Live oaks are near and dear to the hearts of Texans,” says Appel. “They represent a feeling of endurance.”