Platypus milk might save us from bacterial infections, and that’s not even the best thing about them

These weird lil’ guys defy everything about how we try to categorize animals. 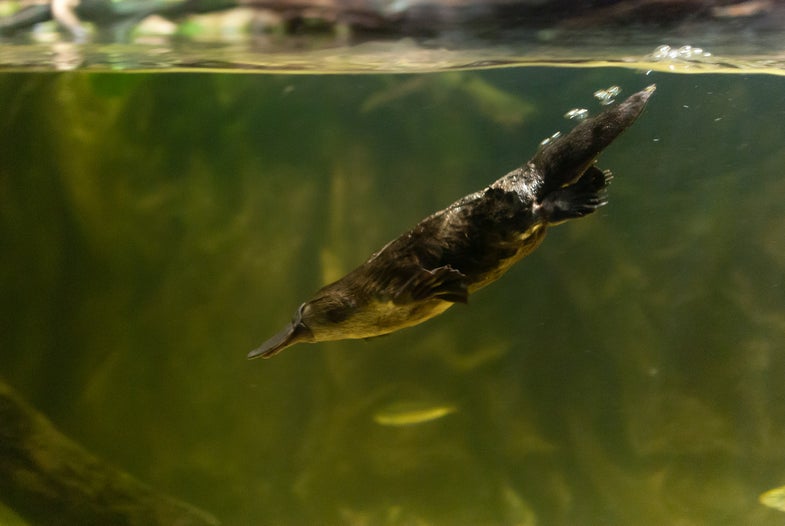 You may have heard that platypuses are going to save us from antibiotic resistance. This may or may not be true. But here’s what we do know: they’re definitely weird enough to pull off a feat like that.

Here’s the deal: so far, we know that platypus milk is capable of killing bacteria and other microbes thanks to an antibacterial protein. This protein has a highly unusual structure not seen elsewhere in nature (that we know of). The Australian researchers who found the protein dubbed it the ‘Shirley Temple,’ because it has ringlets and scientists like giving things funny, cutesy names. They published their results in the wildly popular journal Structural Biology Communications. In that paper they hypothesized that, due to its unique structure, the protein might also function differently from our current antibiotics, and that this difference in functionality might mean it can kill bacteria that other drugs can’t.

But let’s keep in mind that no one has actually demonstrated that yet. To do so, scientists would need to somehow introduce the protein to an antibiotic resistant bacteria, then sit back to watch the carnage (hopefully) unfold. But the potential usefulness of this milk protein just seems to jive with everything else that we know about platypuses. Or, as one of the lead scientists on this study said in a press release: “Platypus are such weird animals that it would make sense for them to have weird biochemistry.”

And she’s not wrong. Platypuses defy every category we try to shove them into—and that’s actually the coolest thing about them.

Bear with me here, because I know that phylogenetics and biological definitions might not seem like the most interesting thing about an animal with venomous spurs that sweats milk. And yet, it is.

See, humans have always tried to categorize animals because, well, we like categorizing. But one man took it to a whole new level: Carl Linnaeus. The Swedish botanist and zoologist had a real penchant for naming things, and single-handedly invented the binomial classification system that we have today. He’s why the official name of a platypus isn’t ‘platypus, but rather “Ornithorhynchus anatinus.” Linnaeus and his disciples divided the entire living world into kingdoms, classes, orders, genera, and species. And for a long time, that was great, because mostly wealthy white guys were doing biology and they loved using nomenclature as a gatekeeping tool. To be a well-respected biologist, you had to memorize thousands of Latin names and understand the complicated family trees of every known animal, and the only people who had time to do that were—you guessed it—other rich dudes.

Of course, the Linnaean system wasn’t totally useless. It just wasn’t perfect. It perpetuated the idea that the natural world can be packaged neatly into natural boxes, when really, we humans were shoving organisms into boxes of our own design—often based on flawed understandings of animals.

A lot of how we differentiated between genera and species had to do with physical features—are they furry? How many legs to they have? Do they lay eggs? We basically just checked off boxes. But because so much of the way we categorize animals is based on 18th century knowledge, we’ve been forced to reassess some of our prior assumptions. For instance, we used to think bats were closely related to birds because they fly, and flying things seem like they should be related. But bats are mammals, far more closely related to humans than to birds.

But no animal seems to defy classification more than the platypus.

And that’s just today’s definition. Linnaeus’ was that it have a four-chambered heart, “hot red blood,” “lungs that breathe rhythmically,” and “that the penis is intromittent.” Most importantly of all, because it’s an idea that persists today, is that “the females are viviparous, and secrete and give milk.”

“Viviparous” means that the animal gives birth to live young. Platypuses are mammals by our modern definition, but they weren’t by Linnaeus’. And really, Linnaeus didn’t have a reason to think he was wrong—platypuses weren’t discovered until roughly 50 years after he wrote that definition, and around a year after he died. As our definition of “mammal” has evolved, the animals that were included in that group have varied.

Platypuses defy Linnaeus’ understanding of mammals in a lot of ways. The most obvious is that they lay eggs. We had to invent a whole other branch of mammals, called the monotremes, for the two animals that are technically mammals but also lay eggs (the other being the echidna).

Really, almost everything about platypuses defies how we think about most mammals.

They do give milk to their babies, but unlike almost all other mammals they don’t have nipples. Instead, they essentially sweat out their milk from pores along their stomachs. The platypus has a bill kind of like a duck, but it’s really more of a hard snout. Their nostrils are on top of the snout, the mouth on the bottom, and oh yeah, they also sense their prey by detecting electrical fields. They literally close their eyes, ears, and nose when they dive underwater and go mainly on electroreception.

It also has some bonus bones in its shoulder not found in any other mammals, and rather than having its legs mounted beneath the body, its appendages spring out from the sides like a reptile. That means they also don’t swim like other mammals, who tend to use all four limbs. Platypuses let their back legs dangle—even though they, too, are webbed—and propel themselves entirely with the front feet, steering with the tail.

They have venom, but not in the teeth. It’s found in little spurs on their feet, and seemingly not to kill prey. Venom is for intimidating other platypuses.

Platypus eyes aren’t like those found on any other four-legged creature, either. They more closely resemble those of a hagfish or lamprey, because of course they do.

Each female has a pair of ovaries, but only the left actually functions. (This is also true of birds.) Young platypuses have teeth, but when those fall out just before they leave the burrow, they grow keratinized pads instead. Their body temperature hovers around 90°F, instead of the standard 98-99°F of most mammals.

All of this basically adds up to a living example of how hard it is to categorize an animal based on physical attributes. That might just be great for us—maybe they will help us with antibiotic resistance. We still clearly have so much left to learn from this wonderful beastie. The platypus is the epitome of “the exception proves the rule.” They make you question everything you thought you knew about what made a mammal a mammal, or a bird a bird. And that’s wonderful. If science is about anything, it’s about confronting the idea that you might be wrong.