This flagship laptop has a detachable 15-inch screen and plenty of power inside. 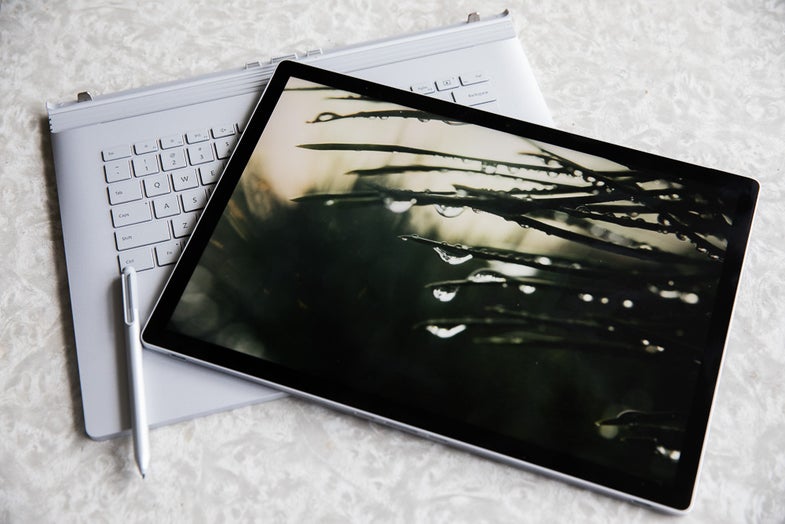 I wrote the first draft of this Microsoft Surface Book 2 review with the Surface Pen in a program called OneNote. The vast majority of it is unreadable, mostly thanks to my terrible handwriting, which resembles the panicked scrawl of a fifth grader trying to finish homework he forgot to do before the teacher comes around to check it.

Parsing the Microsoft hardware landscape can be tricky thanks to its frustratingly similar naming conventions, but the Surface Book 2 is the company’s flagship laptop. Unlike the confusingly name Surface Laptop, the Surface Book 2’s touchscreen display completely detaches from the keyboard so it can operate as a stand-alone, tablet-style device. That’s not to be confused with the regular Microsoft Surface Pro, which is a dedicated tablet to which you can attach a keyboard case.

Short version: It’s Microsoft’s flagship laptop with a detachable touchscreen that moonlights as a huge tablet.

A large chunk of the Surface Book’s hefty price tag depends upon the value of its detachable touchscreen display, and its utility as a practical tool for creative professionals. This is Microsoft’s shot across the bow of the MacBook Pro, which is having a moment of weakness after its most recent update skimped on the overall power level and put a lot of emphasis on a touch-sensitive control bar that seems woefully outmatched when compared to a fully touch-sensitive screen. After a week with the Surface Book 2, I’m impressed.

Aside from the overall speed of the machine, the responsiveness of the Surface Pen experience has improved a lot. Oddly, Microsoft doesn’t ship a Surface Pen Platinum in the box in an effort to cut down the already-high retail price, but if you’re thinking about buying this laptop, you should just consider the addition of a Surface Pen an essential part of the purchase. The latency is low (both the Surface Pen and Apple Pencil hover around 20 milliseconds) and the increased sensitivity with more than 4,000 levels of pressure makes lines look more realistic.

The screen is still smooth glass, so there’s no nice paper texture feel while you’re writing, but drawing and writing with a Surface Pen is now at least as good as using an Apple Pencil on the iPad. I took notes on Magazine pages I was editing and no one sent them back to say they were unreadable and the ability to switch colors and tip-types on the fly proved extremely helpful.

My sketching abilities are one step above those of a finger-painting gorilla, so a personal illustrator friend took it for a spin to draw some mythical dragons. His verdict was similar to my note-taking observations. The lack of lag makes the lines feel as though they’re under the pen instead of behind it, which is the goal for digital drawing. It’s not perfect, yet, and it may never be, thanks to hardware limitations, but it’s not impossible to forget you’re drawing on a computer, especially since palm rejection has gotten so good and you’re now less likely to accidentally pull up a menu or something with an errant touch.

The first thing I opened in Photoshop was a small collection of 200MB TIFF scans of medium format black-and-white film. They choke computers as you zoom in to carefully clone out tiny bits of dust and debris, but the Surface Book 2 handled it just fine. It’s this kind of neurotically detailed work in which the touchscreen and pen really make the difference. Pinching to zoom in and out, and wielding the clone stamp tool freely with the pen, is much more efficient than endless clicking around with the mouse and keyboard, at least once you get used to the workflow.

The Surface Book 2 also excels as a presentation tool when you’re trying to show people pictures. I typically use an iPad Pro to show clients and editors my work, but that tablet seems relatively puny next to the massive 15-inch, 3240 x 2160 pixel screen of the Surface Book 2. That also means it has about the same pixel density as the iPad Pro, and more pixels per inch than the MacBook Pro.

It also still has a built-in memory card slot for dumping photos off of SD cards, which is one of the things I miss most in the current model MacBook Pro.

My thoughts are similar when it comes to video editing. I ran some 4K footage from a GoPro Hero6 through the latest version of Adobe Premiere and it handled the import, edit, and export without a hitch. It’s certainly no match for an industrial-grade desktop, but few laptops really are.

But, is it a good laptop?

When you’re not using the touch interface, the Surface Book 2 is solid, if slightly unremarkable. I installed and ran the super-popular team-based video game Overwatch with no problem, but it’s not going to compete with a dedicated gaming laptop in terms of pushing crazy resolution at insane framerates.

Its battery life is solid, easily covering a whole day of work in “recommended” battery mode unless you really start pushing hard with things like Photoshop—then it drains much faster. Microsoft claims 17-hours of battery during local video playback, or five hours if you’re using the screen as a stand alone device detached from the keyboard.

It has two USB 3 slots, as well as a USB-C port to replace the Mini DisplayPort connection in the previous model. Microsoft also snuck a single USB slot on the charging brick so you can power up an extra device when it’s plugged in.

The audio performance isn’t great, and the headphone jack is still awkwardly place at the top righthand corner of the screen if you’re using it like a laptop, but a pair of wireless headphones to connect via Bluetooth clears that problem up nicely.

It’s important to note that, despite its form-factor, buying the Surface Book 2 isn’t quite the same as buying, say, a laptop and an iPad. The detached Surface display is beautiful and impressive, but the battery only lasts roughly five hours, and it lacks some common tablet functionality like a native Kindle app. It doesn’t necessarily replace an iPad for every user. In fact, it doesn’t really claim to, but I’ve seen and heard that comparison a lot.

Also, an iPad can be subtle and inconspicuous, whereas this thing feels like a light up boogie board sometimes thanks to its size.

The Surface Book 2 is a fantastic laptop, and it reminds me of a smaller version of Microsoft’s massive touch-sensitive desktop, the Surface Studio. But, this is a lot of machine and, unless you’re considering a laptop in the range of a high-end MacBook Pro, it very well could be overkill for your needs.