Mophie’s Powerstation AC fuels everything from laptops to curling irons

A solid emergency backup battery that's worth its extra heft. 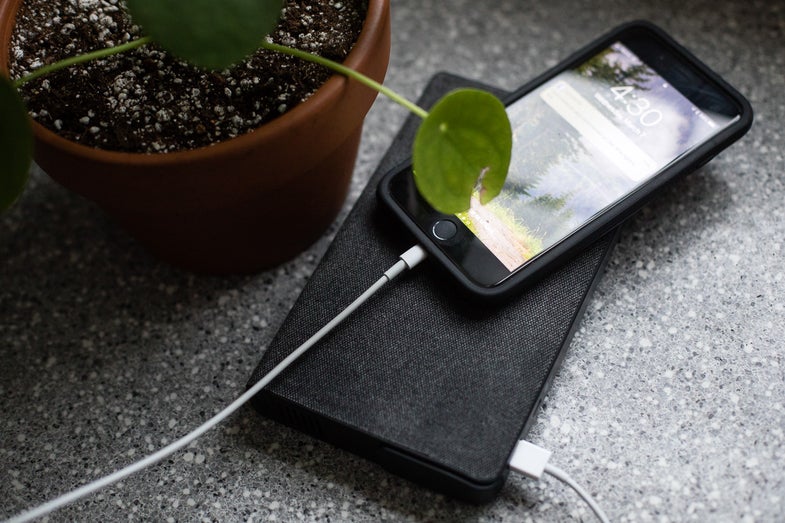 The batteries inside our devices have gotten bigger and more efficient in recent years, but we have also gotten greedier as users. We run resource-intensive image and video editing programs on our laptops, and play games on our phones that would have made a PC cry five years ago, and generally stay glued to our devices for large swaths of time. All of that requires juice, and backup power packs have become standard issue as part of our every day carries.

It goes beyond charging smartphones, and even tablets, by including a full-on, three-pronged power outlet on the top of its paperback-book-sized body. It’s a substantial addition to your bag, but it’s a solid performer that might be worth the weight, depending on your thirst for power.

This 1.66-pound brick has a 22,000 mAh battery inside. For comparison, most modern smartphones have between 2,000 and 3,000 mAh cells inside, while the iPad Pro has around 11,000 mAh. It’s not a perfect conversion, of course, because you lose some juice during the charging process, but suffice to say that there’s a lot of charging potential inside this Mophie device.

In addition to a typical USB-A and USB-C port, the Powerstation AC also has a full 110V AC plug, just like the one you’d find in a home outlet hiding under a rubber flap on the top of the device. So, you can plug in big appliances or other chargers that don’t work via USB, like DSLR batteries. The gray fabric cover is resistant to scuffs, even if it gets jostled around in a bag.

The first thing you’ll have to do with this brick is give it a charge. While I didn’t sit around staring at it to hit 100 percent, I can say that it takes roughly three hours to fill up once it’s empty. Your best bet is to charge it overnight by plugging it into the wall. One nice feature is its priority charging mode. When the Powerstation is plugged in to charge, you can plug in another device like a smartphone and the Powerstation will give it priority. That way, the smaller battery will fill up first rather than waiting for the big battery to charge, which is much slower.

The USB-A and USB-C slots deliver power in a pretty standard way. The USB-C jack delivers up to 30 watts, which means it can power a MacBook Pro or another USB-C-powered laptop, though it will be a slower trickle than the dedicated power adapters, which usually run between 60 and 100 watts.

The USB-A slot is powerful enough to fast-charge a smartphone device, which means you can get an iPhone X charged as fast as you can with an iPad power supply. I got most of a full charge in an hour.

The single USB-C port can be a little inconvenient because it’s the way in which you actually charge the device. So, you can’t plug in the Powerstation and charge a USB-C device at the same time. I also would have liked a second USB-A port to charge both an iPad and an iPhone at the same time. The standard AC outlet can power most small appliances under 100 watts. So, it will power a curling iron, but not a blowdryer.

One of the most interesting features about the Powerstation AC is its three-pronged outlet. When you want to use it, you have to press another button, which sends power and also starts the cooling system. There’s a fan inside the Powerstation to blow out hot air and keep it cool, which makes it a little loud. It’s not as noisy as a desktop PC, but it’s close to the sound a MacBook Pro makes with its fan.

The outlet is a ground fault circuit interrupter, which means it will shut itself off if it senses that power is flowing in a way that it shouldn’t. This kind of outlet is common in rooms like bathrooms or kitchens and can help prevent frying your gadgets or starting a fire if something goes wrong.

There’s enough juice inside the Powerstation to fully revive a 15-inch MacBook Pro, which is impressive and has come in handy a few times since I’ve had it. If you have a smaller MacBook Pro, you can get nearly 1.5 charges.

I tried it with a few other items, including my daughter’s curling iron, and found that the 100W output was enough to power it up with no problems. If you’re camping or want to keep one charged for an emergency, the outlet really does add versatility.

It’s almost exactly the same size as an old paperback book, which is an old-school way of consuming content, if you’re wondering. It’s about as thick as my copy of Dune if you want to get specifically nerdy about it. it feels very dense at 1.66 pounds, but it fit easily into my bag and the cloth cover that covers most of its body hasn’t scuffed, even after banging around in my backpack during travel.

With a retail price of $200, this is on the pricey side for a power bank, even with all that capacity and the additional outlet. But, Mophie’s reputation in the space and the Powerstation AC’s ability to quickly charge just about anything I plugged into it makes a compelling case that it’s worth the money.

It would be nice to have an extra USB-A or USB-C port, so if you’re primarily going to be charging a lot of smaller devices, you’d likely be better off with something that has more ports. But, in terms of pure versatility, the Powerstation AC is solid, especially when a blizzard knocks out your power and you have to type a review of a backup power pack.