Typing is much better now. 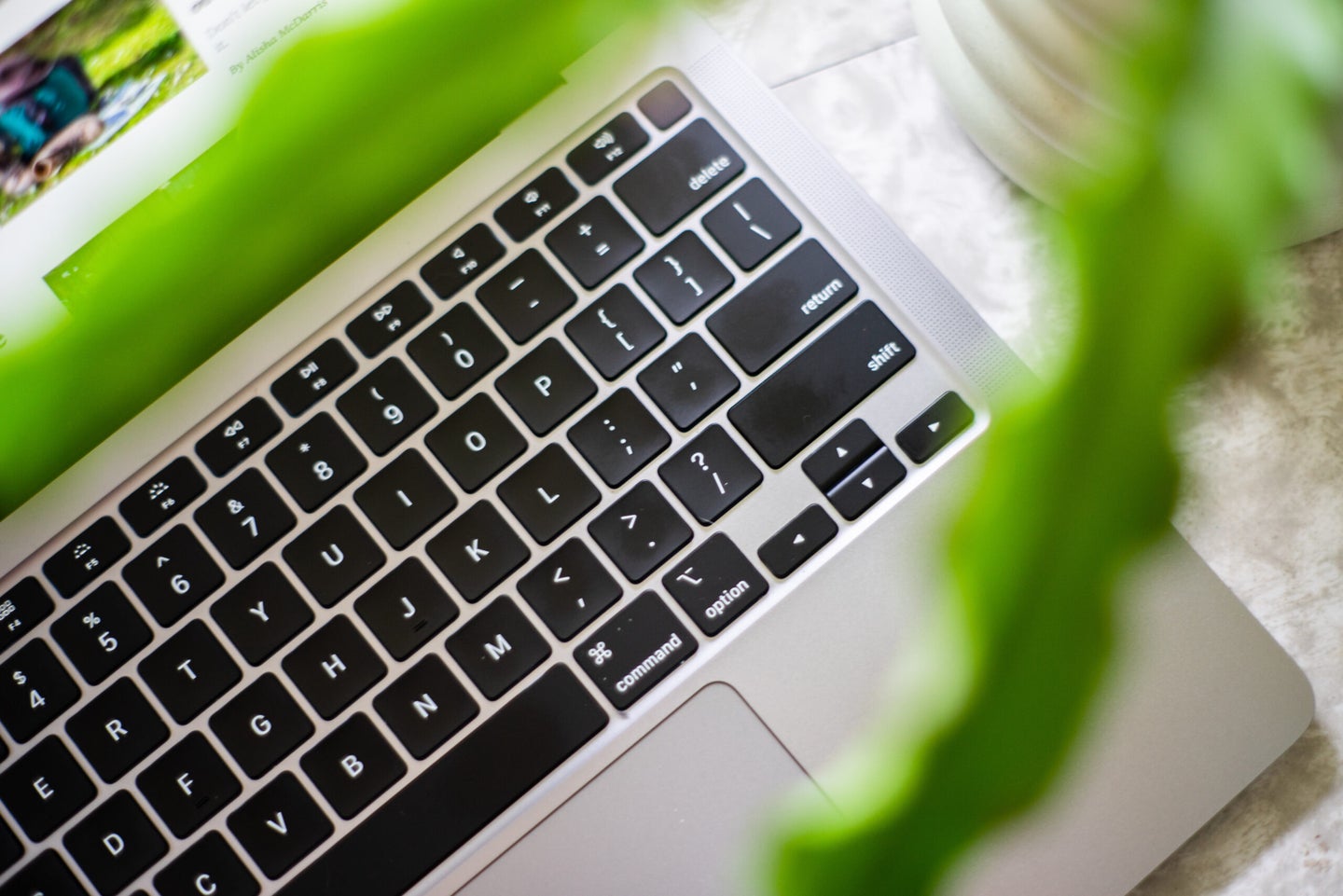 The keyboard feels much, much better than the previous model. Stan Horaczek
SHARE

Social distancing has made this an unfair time to review a laptop like the MacBook Air. I’d typically write this with it perched on a rickety Amtrak tray table or a crumb-laden coffee shop counter. But, like everyone else, I’ve been here at home since the MBA arrived. Beyond that, screen time has skyrocketed as sitting at home and staring into the internet has become a powerful method of serving the public good (because you’re not wandering around outside). As a result, I’ve asked a lot of this new 13-inch laptop. And after a couple weeks, it’s clear that this is one of the best all-around laptop options on the market at the moment.

Shut up and tell us about the keyboard

Yes, Apple replaced the keyboard. Like the excellent 16-inch MacBook Pro, the new Air comes with a totally redesigned keyboard, which promises beefier defenses against Pop Tart crumbs and general desk detritus that could get in and make you typ lik this bcaus a ky stoppd working. It’s also just generally more pleasant to type on. The 1mm travel feels like typing into a memory foam mattress compared to the unsatisfying slaps that came from the previous model.

The keyboard was one of the biggest gripes about the MacBook Air line and it’s fixed here. Unlike the MacBook Pros, you also get a full row of function keys instead of the controversial TouchBar. The TouchID sensor sits in the upper righthand corner. As a package, the whole thing is excellent.

From a computing hardware standpoint, the processor has jumped to the latest 10th-generation Intel chips. The base model MBA includes a 1.1 GHz dual-core Core i3 processor, which is somewhat paltry, but you can upgrade to a 1.1 GHz quad-core i5 for $100 extra or a 1.2 GHz quad-core i7 processor for $250.

The $999 base model is the most affordable, but it’s not the one you should buy. The upgraded $1,299 version comes with the i5 processor and 512 GB (double what you get from the base version), which will be much better even for normal users. Going up to $1,499 to reach a total of 1 TB storage will likely come in handy if you can justify the cost because the MBA only has two USB-C ports and you’ll need to use one for charging it.

The 13.3-inch, 2560-by-1600 screen still looks excellent with solid color accuracy (I turn off the TrueTone function that adjusts the display picture depending on ambient light). It could stand some extra oomph at the top end of its brightness settings to increase visibility in highly illuminated areas.

From a hardware standpoint, this update isn’t a revolution, but not many users were complaining about that piece in the first place. Apple didn’t set out to make it the smaller MacBook Pro.

Apple claims 11 hours of battery life if you’re just surfing the web, or 12 hours if you’re using it specifically for watching content on apps like Apple TV. As with the number of Cheez-It crackers one considers a “single serving,” those numbers vary wildly in the real world. I was able to use the MacBook Air for full workdays involving plenty of Slack, lots of web usage, music streaming, and staring into blank Google Docs while grinding my teeth.

There are laptops out there in this size that outperform the Air when it comes to battery life, so if that’s your top priority, you’ll find better options.

In terms of speed, it’s not hard to get the MacBook Air’s fans to spin up once you start tasking the hardware with demanding work. I used a professional photo editing software called Capture One to edit some full-resolution raw images files and the fans were working over time after just a few minutes. For that kind of thing—along with video editing or audio recording—I would recommend a MacBook Pro if you’re planning to do them on a regular basis.

I typically use Chrome and other third-party apps during the day, but Apple claims using its own first-party products like Safari saves battery life. I found that Safari caused the fans to spin up less and led to seemingly better battery life than Chrome.

The built-in webcam seems wimpy with its 720p resolution, especially when you consider how good smartphone cameras have gotten recently. This seems particularly lame in a time where video chats became an unexpectedly enormous part of our lives.

The dream of a true MacBook Air with a touchscreen seems all but dead. I came into this review period directly from exclusively using the new iPad Pro for more than a week. I didn’t expect coming back to a full-fledged laptop to feel like such a relief when it comes to handling most of my everyday tasks, but it did. For work, the MacBook Air still feels much better. It’s the after work time—when I wanted to balance a device on my stomach and watch content on a really beautiful screen or try to improve my truly awful drawing skills—that I missed the iPad.

Who should buy the new MacBook Air?

If you’re trying to compare spec sheets line-by-line, the MacBook Air rarely comes out at the top of the heap, even against machines cheaper than it. But, that’s always been the case. Like the models that came before it, the Air is sturdy, reliable, and generally great to use. The keyboard was one of the biggest drawbacks, but Apple has effectively fixed that.

If you’re going to jump into an Air, upgrading the processor and built-in storage will likely make your life better in the long run. And maybe keep the crumbs away from the keys anyway, just in case.