Google's high-end tablet is like a fancy condo in which Chrome and Android apps live. 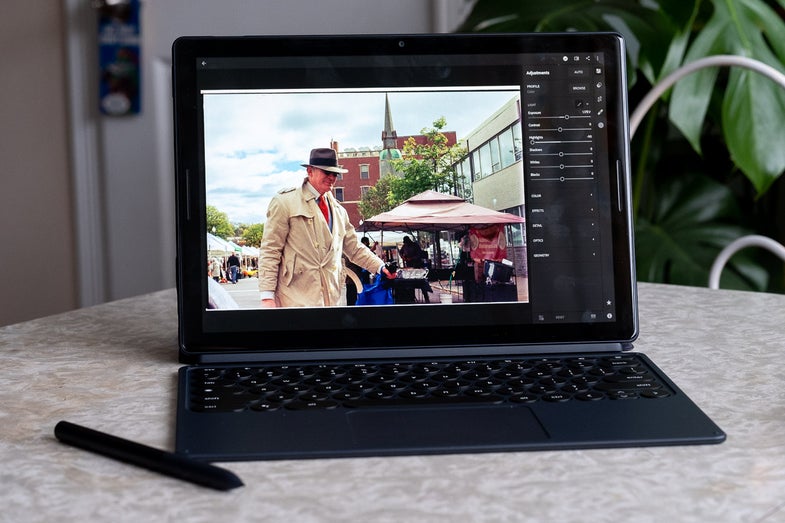 About a year and a half ago, Google decided that its Chrome OS (short for “operating system”) should play nice with Android apps, which were previously relegated only to smartphones and Android-powered tablets. It’s a logical step, and other companies like Apple and Microsoft have been working to marry the historically quarrelsome relationship between web apps that run in a browser and mobile apps downloaded from an app store in recent years.

A device like the Pixel Slate is the perfect candidate to take that relationship to the next step. When you’re holding the tablet without its keyboard, the hardware itself to the Android selections found in the Google Play store. At the same time, the beautiful 12.3-inch screen demands a full version of Google Chrome that displays complete versions of websites rather than nerfing them down to the smushed mobile versions.

While the Pixel Slate shows a lot of promise, it illustrates how much work there is to do before these two factions can live together in harmony on a single device. If Chrome OS tablets were the American Version of The Officethen the Pixel Slate is the moment when Jim comes back from Stanford, but still hasn’t asked Pam out. There’s so much hope, but we’re not quite there yet.

The Pixel Slate itself is a tablet with laptop-grade guts. It uses the latest 8th generation Intel Core processors. You can start at the $599 base model with a Core i3 processor, 4GB RAM and 32GB internal storage, or if you’ve recently won a PowerBall jackpot, you can climb all the way up to the $1,599 flagship with a Core i7, 16GB RAM and 256GB built-in storage.

Rounding out the feature set you’ll find a pair of USB-C ports, dual front-facing speakers to either side of the 3,000 x 2,000 pixel Gorilla Glass 5 screen, and cameras on both the front and the back of the device. The front-facing wide-angle camera is really fantastic for video calls. The back camera takes totally nice-looking, smartphone-grade photos, but should only be used in emergencies since there’s no way not to look like a dork when taking a photo with a tablet.

What’s the deal with the keyboard case?

It’s hard to imagine a situation in which you would spend this much cash on a device that is designed largely for productivity without at least giving yourself the option of a keyboard. When drawing with the stylus or just reading a book in the Kindle app (which actually works pretty nicely in the Chrome OS architecture), ditching the keys and holding a slab of aluminum and glass is nice. But, I tried getting some of my regular work done in that formation and I’d rather eat a bag of cotton balls than use a content management system (the system used for putting words and pictures on websites like this one) or type for long periods of time without some real keys to press.

The Pixel keyboard is a great accessory. The round keys are weird–like a throwback to a vintage typewriter–but they work great. They have a relatively short travel similar to the iPad keyboard, but they’re so satisfying to push. You can type really quietly on them if you want, but I enjoyed slapping away at the keys as loudly as possible. Even going back to my MacBook Pro—the one that still had the good keyboard—was a little disappointing. Even if you’re one of those mechanical keyboard types who like your typing to sound like a tommy gun in a movie from the 1920s, you’ll still probably like this better than any other tablet keyboard case.

But, like eating a giant burrito before bed, the keyboard feels good, but has some considerable drawbacks. Unlike the iPad keyboard case, the Slate keyboard has a really responsive touchpad. It might seem redundant with a touchscreen device, but it makes the transition from a laptop much soother. The downside, however, is that it gives the whole device a huge footprint that failed catastrophically when I tried to use it on a train tray table. This isn’t an issue with a rigid hinge to keep the screen upright, but trying to use this thing in the case on a tray table is a great way to spend two minutes trying to pick it up off the ground after it slides under the seat in front of you.

Hardware is one thing, but how is that Android and Chrome OS marriage going?

If you haven’t used Chrome OS in a while, it may take you a little while to nail down the correct mixture of web apps and Android apps from the Google Play store. Some things are obvious, like Adobe Lightroom CC, which requires a download, but other common go-tos like Gmail simply open in a Chrome tab.

Once you’ve committed to downloading the Android version of an app, there’s no guarantee that it will look great. Instagram, for example, opens as an app that either looks hilariously tiny or appallingly pixelated. So, while you get access to some things laptops can’t access—games like Arena of Valor, for instance—it’s a coin flip about how it will render or work.

While this is a detractor from the current version of the device, it might not apply to everyone. If you’re just looking for a really slick machine to watch Netflix, do email, and maybe doodle around with the optional $100 Google Pen, you may not even notice the issues until they’re resolved. And it seems very likely they will get resolved.

Right now, Chrome OS is a very minor player in the tablet market, but it’s a 10,000 pound gorilla (yes, that’s much bigger than a 400 pound gorilla) in the education world. Chromebooks have a reported 60 percent share of the education market where young people are building allegiances to tech platforms in between learning how to multiply fractions and shooting spitballs. Giving those students options to stick with a familiar operating system down the road seems like a very solid play for Google.

So, can it replace a laptop or what?

We’re getting there, but not yet. And ultimately, that’s not the point of the Pixel Slate. Google already makes the $1,000 Pixelbook if you want Chrome on a typical Pac-Man style computer. This is something different and, under the right circumstances, pretty great.

There are excellent little touches all over the hardware. The power button has a built-in fingerprint reader that lets you store up to three fingerprints to accommodate different ways of holding the tablet. And the speakers are loud enough to enjoy content on if you’re planning on replacing your TV with a smaller device—something more and more people are doing. The Google Assistant integration is nice, too.

If you’re going to buy one, the $999 Core i5 option seems like your best bet. You don’t need to crank the storage because external hard drives work with the Slate’s two USB-C ports. You should, however, spring for a keyboard case. The Brydge G Type Keyboard that Google sent along with its review unit has a firm hinge, which I found a lot more useful than the sleek-but-too-floppy Google keyboard case.

Whether you want to spend the extra $100 on the Pen is really up to your tastes. It has a built-in Assistant button and allows you to do things like circle an item on a web page and automatically search for it on the web. So, there is functionality there, even if your artistic talent peaked during fingerpaints in grade school