A pro illustrator talks about what makes a stylus worth using. 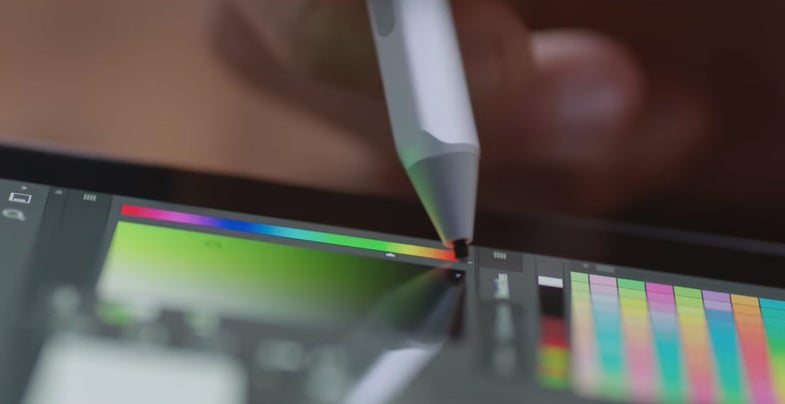 Just a few days ago, Microsoft announced an upgrade to its Surface Pro touchscreen computing device (Redmond hates when you call it a “tablet”). You might have missed it because not a whole heck of a lot has changed. The Surface Pro now has the latest 7th-gen Intel processors, extended battery life up to 13.5 hours, and a swanky new keyboard covered in Alcantara, a material that feels a bit like suede, but is made from polyester and polyurethane to make it durable. What has significantly changed, however, is the Microsoft Surface Pen, and that could be a big step forward for Microsoft in its current efforts to court the creative class.

The Surface Pen no longer comes bundled with the Surface Pro, but it has gotten performance bumps in almost every column of its spec sheet.

One of the most-notable upgrades is the shortened latency of 21 milliseconds, which is twice as fast as the previous model. According to professional illustrator Clint Baker, responsiveness is key for being able to capture the nuance of an artist’s style. “I want drawing on a digital format to feel just like drawing on paper or canvas,” he told me via email.

Baker says he does about 70 percent of his illustration work digitally using a stylus. He’s currently using a Wacom Cintiq, which is one of the standard setups in the illustrating profession. The large, pro-grade Cintiq displays keep the response rate down around 12 milliseconds, but Microsoft’s Surface Pen is actually faster than Wacom’s more-portable Cintiq displays, which are more comparable in terms of size and price and have a response rate around 25 milliseconds. Apple, not surprisingly, doesn’t disclose the latency of its Pencil.

Pressure sensitivity is another area where the Surface Pen has jumped in performance. It now recognizes 4,096 different levels of pressure, up from 1,024 in the previous model. Baker says this is another important feature. “So much personality comes out in line quality—and that has to do a lot with pressure.” Even the high-end Wacom Cintiq drawing displays only claim 2,048 levels of pressure sensitivity.

The Surface Pen now recognizes the angle of the stylus for controlling line shape and shading. This feature is popular in the Apple Pencil. Microsoft also claims to have reduced the parallax performance, meaning the line you draw will appear closer to the tip of the pen as you move along. The glass of the screen can sometimes make you feel as though you’re separated from the drawing, which can be distracting.

Microsoft has also announced some updates to its pen-based software, like a new Whiteboard app, which acts as a space for collaborated drawing and note taking. The virtual “pencil case” can also now help brushes and Pen settings commute with you between apps.

This is all great news if you happen to be an illustrator or a photo retoucher, but Microsoft doesn’t want the upgrades to only net benefits for creative pros. The stylus will play bigger role across the entire lineup of touchscreen Windows 10 devices, which includes precision control in apps like PowerPoint. At the very least, your stick figure doodles and 3D cube drawings will feel more like they’re done on ink and paper than bits and glass.