Not much in the way of new hardware at Apple's education event. 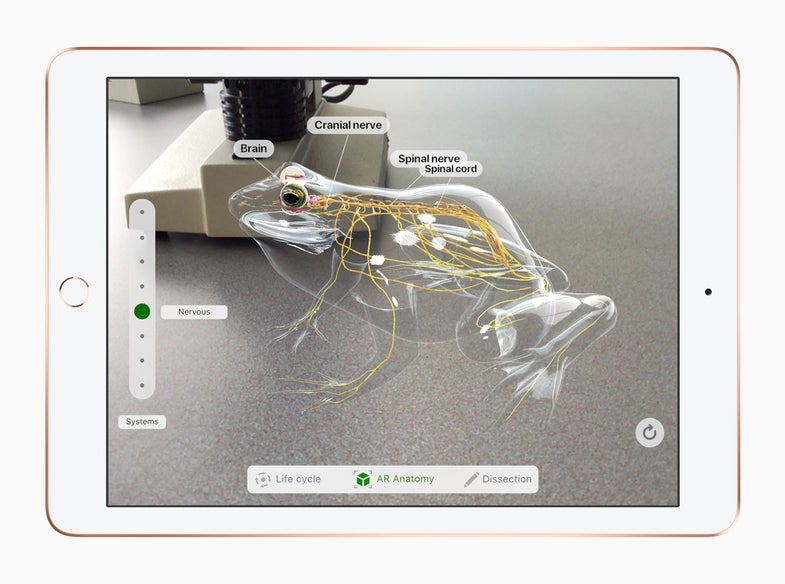 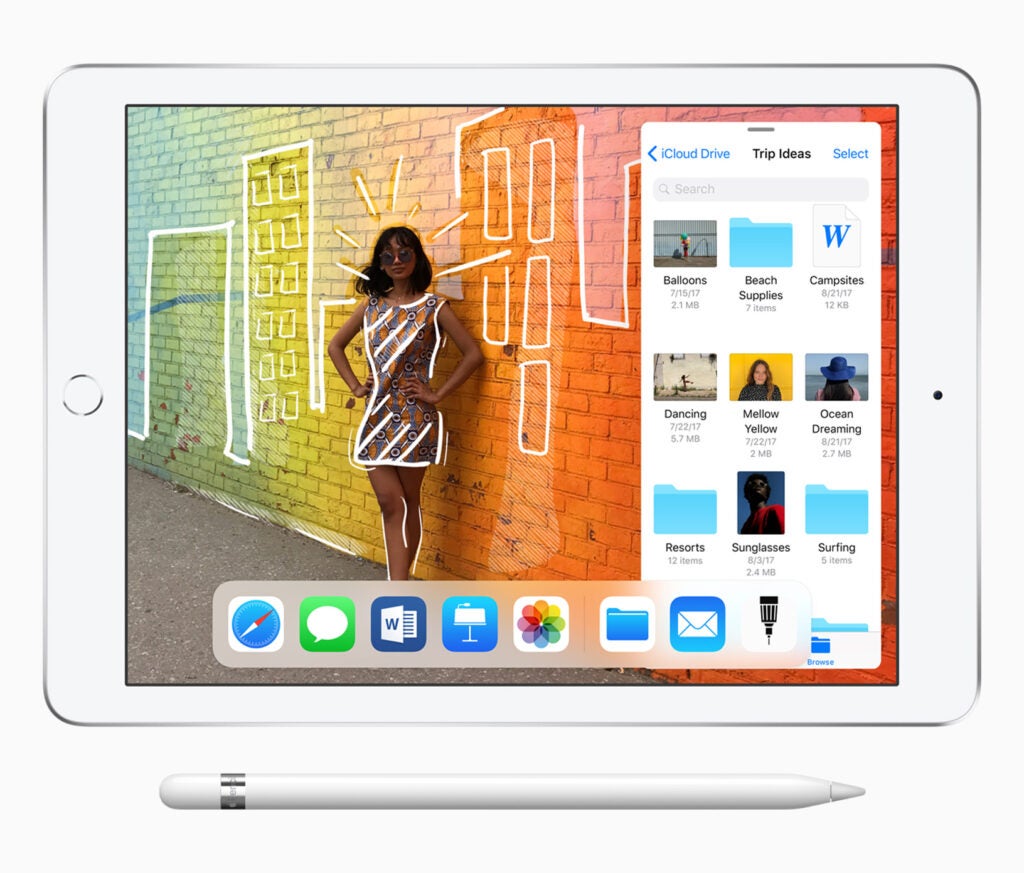 The cheapest iPad with Pencil compatibility now costs $299 if you’re a student and $329 if you’re not.

Right now, Google and its army of Chromebooks is winning the hardware game in U.S. schools. Its market share hovers around 60 percent, thanks in large part to its Education software platform and the availability of cheap hardware. That hasn’t stopped the competition from trying to catch up, however. Last year, Microsoft boosted its initiative with cheaper laptops, a student-specific version of Windows, and a push toward Mixed Reality in classrooms. Now, it’s Apple’s turn to crank up the volume on its educational efforts.

Tuesday’s Apple event in Chicago revolved around the updated iPad. The sixth-generation device looks a lot like a 9.7-inch iPad Pro from 2016. It has a A10 Fusion processor, a 10-hour battery display, and the typical suite of cameras. The big news, however, is its $299 price tag (for students, that is—the rest of us pay $329). The device is now the cheapest iPad in the lineup that’s compatible with the Apple Pencil stylus.

Apple also gave a shout out to peripheral company Logitech, which is making a $99 keyboard case for the new iPad, as well as a $49 Crayon stylus meant to offer a cheaper alternative to the $99 Pencil (schools get a $10 discount, for a total cost of $89). It seems like a real missed opportunity to call it the Number 2 Pencil. 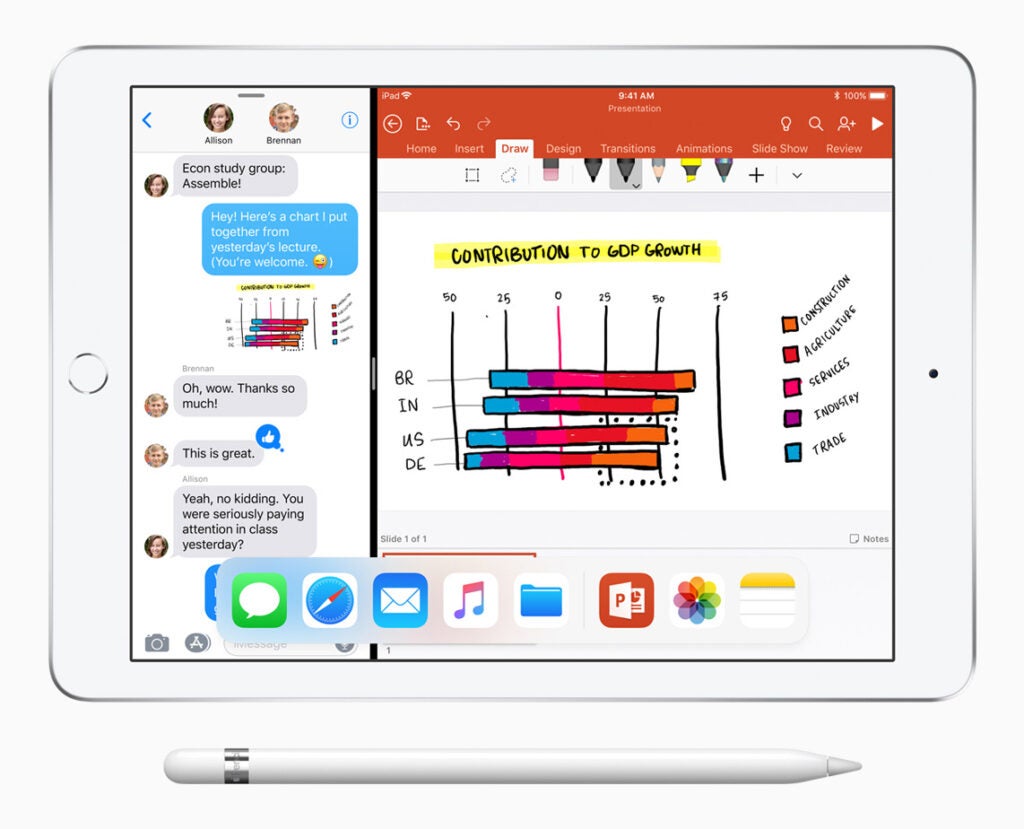 The upgraded processor inside the new iPad helps it churn during multi-tasking.

All-in, that gives the iPad a retail spend of about $450 before tax, and without taking into consideration the negotiations that typically go on when a school buys a giant stack of devices. Compared to the roughly $200-$250 price of many popular Chromebooks, it’s still a fairly hefty premium.

The internal storage options remain the same as iPads that came before, but educational users now get 200 GB of iCloud storage instead of the normal 5 GB.

Beyond the new iPad

In addition to the hardware, the company also announced updates to its education-based platform and software. Schoolwork is a teacher-oriented app that lets educators assign work, assign material (in PDF or interactive forms), and monitor student progress.

The Classroom app, which teachers already use to monitor student activities, will now run on Mac computers as well as iPads, which makes it easier for educators to check up on kids and make sure they’re doing what they’re supposed to, especially during tests. 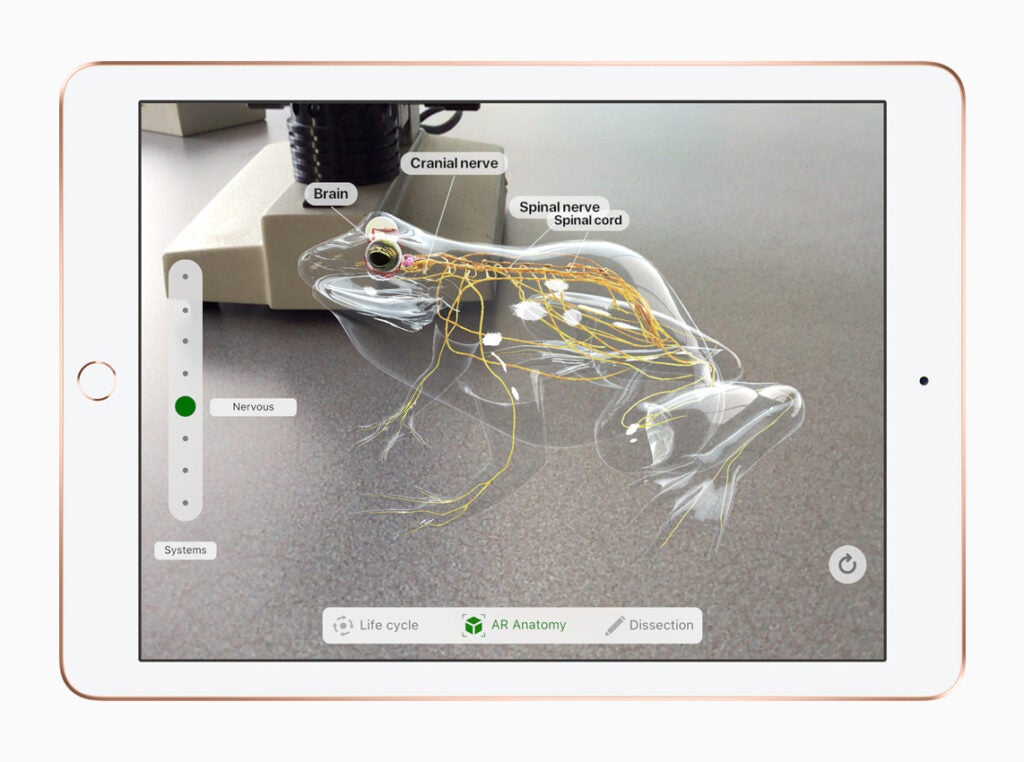 Apple clearly sees augmented reality playing a considerable role in the future of education, especially when you can do stuff like dissect a digital frog. Still, this is the kind of thing Microsoft has been pushing with its Mixed Reality tech for more than a year.

All about the Pencil

For students, the practicality of Pencil integration is still a question mark. Apple has updated its iWork apps like Pages and Keynote to integrate drawing functions, so kids can put their own handwriting and marks into presentations and even books. Teachers can also use the Pencil to mark things like papers or source material in their own handwriting. There are, of course, also benefits when it comes to art classes and even AR apps like the anatomy demonstration in which students dissect a digital frog.

But, the concept adds some inherent complications to the process. Even if schools come up with the cash to buy a big grip of them, they still have to endure the process of deploying, tracking, and maintaining them. Kids lose entire iPads and Chromebooks, which makes the prospect of them hanging onto a $100 Pencil seem tenuous.

While this product has been touted as hardware for education, it could really be a boon for aspiring creatives like illustrators, designers, and tattoo artists. Until now, users had to step up to the iPad Pro for Pencil compatibility, which meant spending $569 before the $99 stylus.

Catching up with Chromebook

On its face, this doesn’t seem like a huge coup for Apple in education—at least not yet. While there are more than 200,000 educational apps in the App Store right now, Google still boasts full compatibility with browser-based sites and education platforms. Apple also lacks access to the full breadth of coding instruction that Microsoft has opened up within its massively popular Minecraft property.

If an iPad is the primary tech device on which a student is expected to do most of their work, that also makes a keyboard an essential add-on—adding expense and work for school technology departments. And that’s before the Pencil even enters the equation.