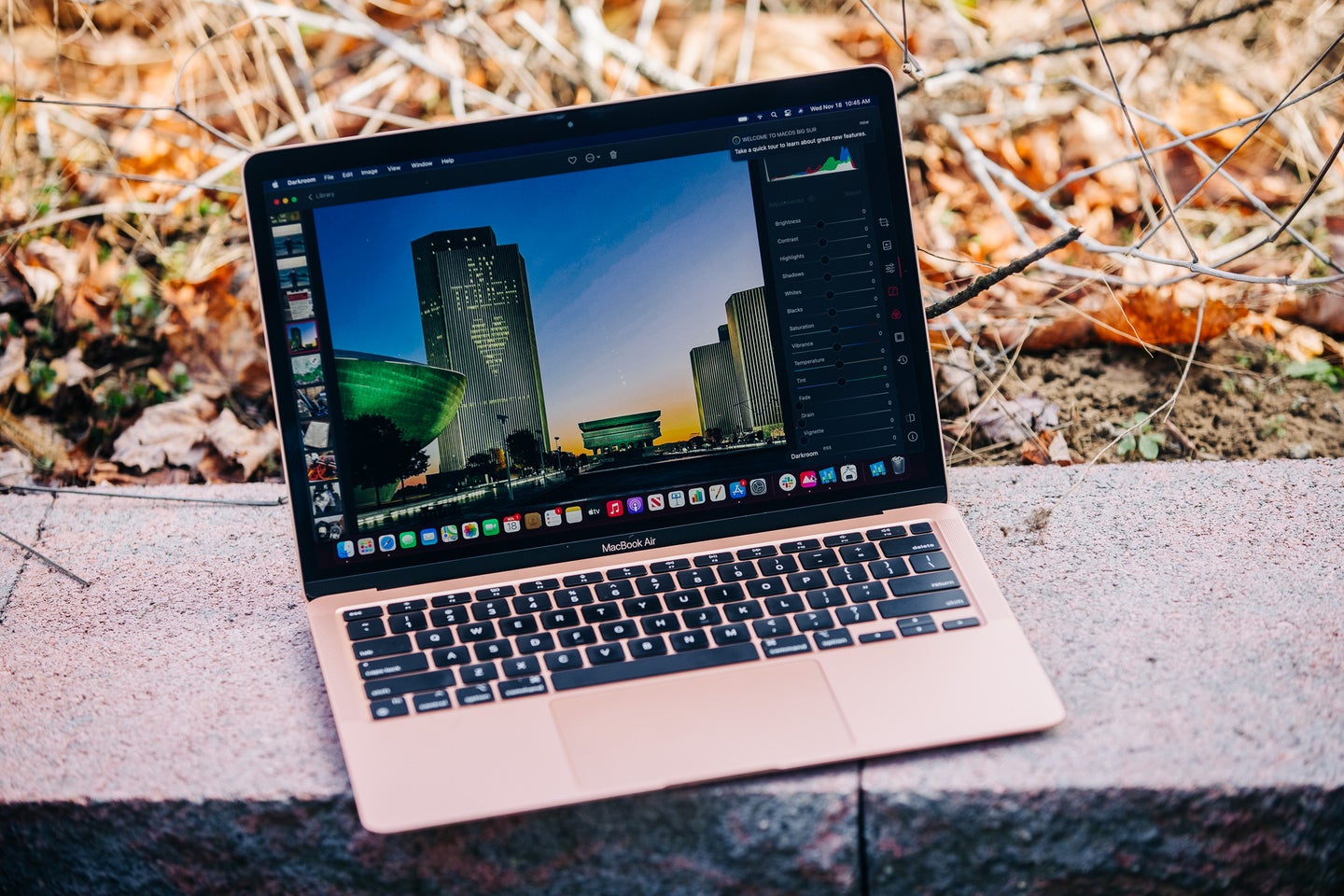 The Darkroom app is one of the first to get optimization for Apple Silicon. Stan Horaczek
SHARE

I keep a big, hardcover book next to my couch for when I want to edit photos in Lightroom with the computer on my lap. Without that tome to protect my legs, my laptop slowly roasts my thighs as if they’re salty, delicious slabs of meat at a Brazilian barbecue restaurant. Laptops get hot when you subject them to resource-intensive activities. That’s just a way of life—and why they generally need fans to stay cool. But when Apple announced its new MacBook Air last week, the company promised the new M1 chip would keep the whole machine cool even without a built-in fan to funnel hot air away from the delicate electronics.

After almost a week of putting the new MacBook Air through the wringer of my daily computing routine, I’m extremely impressed (and my thighs remain shockingly uncooked, even without the book). The M1 chip certainly seems like the real deal.

What’s the difference between this and the old MBA?

Earlier this year, Apple announced its intentions to break up with Intel, the company that had been making chips for Macs since early 2006. Apple silicon was already inside iPhones and iPads, but now it is taking on its most power-hungry machines.

The Apple silicon product built for the Mac is called the M1 and it’s a system on a chip. That means essential components like the processing cores, graphics cores, the neural engine, security enclave, and even the system memory are all part of one bigger slab of silicon. You’ll find this same basic configuration inside iPhones and iPads.

How fast is it?

Apple claims this holistic approach to building the chip provides tremendous advantages in terms of efficiency—different systems on the chip can access the same data without having to make redundant copies. This kind of efficiency upgrade only saves tiny fractions of a second with every occurrence, but when it happens billions of times in a row, it can add up to a tangible performance increase.

It sounds complicated on paper, but in the real world, it translates to a tiny, silent computer that’s absurdly fast. I ran the MacBook Air through the popular benchmarking software, Geekbench 5, which puts computers through a standardized set of computing tasks and spits out a score to help compare one machine to another. The new $999 MacBook Air trounced the 2019 16-inch MacBook Pro (which cost $2,399 in 2019) in single-core performance and edged out the win in the multi-core score. Beyond the numbers, just about everything feels like it moves faster on the MBA. Apps open instantaneously, photo previews snap into full resolution immediately. It’s extremely impressive.

That’s not to say that the Air will replace every MacBook Pro or Mac Pro out there. The lack of a cooling fan means that performance does indeed start to slow down as heat builds up. After an hour of editing photos in Lightroom, the MBA had clearly throttled back a bit when it comes to computing power—things took a bit longer. The new M1-based MacBook Pro has a fan built in specifically for this purpose—in fact, that and the battery are the main difference between the two machines (unless you count the Touch Bar, which I do not.)

In addition to the speed upgrades, Apple also claims to have effectively doubled the usable battery life compared to the previous Air. In the real world, I got a solid 10 hours of typical work done on it during a workday without having to worry about plugging it in. That’s a huge jump over the previous model, which usually tapped out some time after lunch.

Down the road, the battery life will actually likely get better, too, as more companies release optimized versions of their apps to take advantage of Apple’s new hardware.

What about those apps?

There are three different kinds of apps you can run on the new M1-powered Macs. Optimized apps run natively on Apple silicon, which means the developers have rebuilt their software to work directly on the M1 chip. Obviously, Apple’s own apps fit this bill, and others have already jumped onboard.

These native apps really allow you to see what the M1 can do. They open quickly, and they take only dainty little bites off of the battery as they operate. Safari on the MacBook Air is the quickest and snappiest web browsing experience I’ve ever had. The latest Big Sur macOS update made it a lot simpler to navigate when you have a ton of Safari tabs open, which is good because the MBA has plenty of power to handle the load. I opened 40 tabs with no trouble at all.

Non-optimized apps will still typically run on the M1 Macs, but there are some exceptions. They run through Apple’s emulation software, Rosetta 2, and you probably won’t even notice a difference when using them. I ran the original versions of Adobe’s Photoshop and Lightroom without issue. Adobe is planning on optimizing both programs in the coming months, but you can try a version of the optimized Photoshop now in beta if you’re eager to give it a try. Just note that it’s missing a ton of typical features and you shouldn’t expect to use it for any real work until the official release early next year. Luckily, the old version seems to work just fine.

Lastly, you can now run iPhone apps directly on an M1 Mac by downloading them directly from the macOS App Store. So, if you want to load up the iPhone version of Among Us and try to murder your friends in adorable ways, you can do so. I can’t see myself using iPhone apps on the Mac all that often. They’re built with a touch interface in mind, which doesn’t always translate well to a mouse and keyboard. Also, companies can keep their iPhone apps out of the Mac App Store, which means some of the software you want—yes, that includes Instagram—isn’t available. Right now, iOS apps on the Mac are kind of a mess, so don’t get too excited about it just yet.

Despite all the internal upgrades, the new MBA looks and feels exactly like its older sibling. The Air was already the most popular laptop in the world, so it’s not much of a surprise that Apple wouldn’t change up the overall feel. It would be nice to have more than two USB-C ports for connecting monitors and accessories, but that’s more of an issue with the M1-powered 13-inch Pro than it is here. The Air’s keyboard feels great, the screen has improved color reproduction, and the whole package feels generally excellent.

I can easily say that the new MacBook Air is the best overall laptop I’ve ever used. That said, this is still a transition period for Macs. Buying the new M1 MacBook Air means buying into a first-generation product, which always carries at least a bit of risk. Before taking the leap, I’d recommend making a list of all the apps you use regularly and checking on whether they have optimized yet or when they plan to do so. But, barring any weirdness that pops up down the line, the MacBook Air is a rather amazing start to Apple’s new generation of Macs.