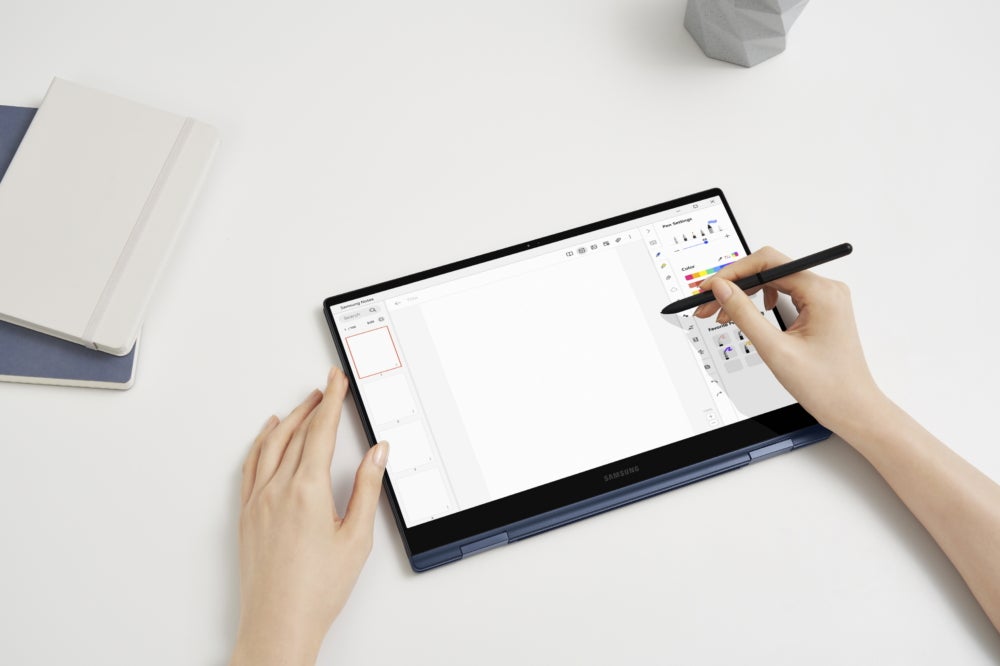 The Galaxy Book Pro 360 flattens out into a tablet. Samsung
SHARE

This morning, Samsung held a virtual event to show off its latest generation of super-skinny laptops. The Galaxy Book Pro and Galaxy Book Pro 360 don’t directly replace anything in the current Samsung lineup, but they do represent the company’s most compelling mobile computing options. They start shipping on May 14.

Despite the Galaxy name, both machines run a full Windows operating system and rely on dedicated laptop processors rather than trying to max out mobile chips to save space and weight. That puts Samsung’s new machines in direct competition with Apple’s excellent M1-powered MacBooks.

Starting at $999, the Galaxy Book Pro utilizes a standard clamshell laptop design. It comes in both 13-inch and 15-inch sizes. The 13-inch model starts at just 1.92 pounds thanks in part to the new OLED display. The screen uses Samsung’s AMOLED tech, which should sound familiar from its Galaxy smartphones.

An 11th-generation Intel Core i5 or Core i7 processor handles the primary computing duties. Because of the size and power requirements, there’s no discrete graphics option, so you’ll be relying on integrated Intel graphics.

When it comes to connectivity, the Galaxy Book Pro offers the following: USB-C, USB-A 3.2, Thunderbolt 4, a microSD slot, and a headphone jack. The 15-inch model also includes an HDMI port. Compared to a machine like the MacBook Air, that’s a rather luxurious selection of ports.

From a battery standpoint, Samsung claims the Galaxy Book Pro can get up to 17 hours of life from a single charge. With the 65 W charger, however, it can absorb enough juice for up to eight hours of work in just half an hour.

This convertible machine has a touch-sensitive screen that rotates so you can use it like a typical tablet. It shares just about all of the same specs with its clamshell style sibling, including the 11th-gen Intel processing hardware. The screen, however, gets an upgrade to a Super AMOLED, which adds brightness and touch functionality. Because it requires a little extra hardware, the $1,199 (and up) Pro 360 starts at 2.29 pounds, which is still extremely light for a full-fledged, touch-enabled Windows machine.

The ports are also extremely similar to the Galaxy Book Pro, but the Pro 360 swaps the USB-A port for an additional USB-C.

If you buy a Galaxy Book Pro 360, you’ll also get Samsung’s S Pen stylus in the box. Functionally, it works basically the same as any other S Pen in Samsung’s current lineup. The company has, however, given it a design upgrade. It’s now 2.5 times fatter than the S Pen that came with its older Galaxy Book Flex. The company says that makes it easier to handle and offers a more realistic writing experience.

Below are a couple handy infographics that Samsung put together to show off all of the stats for both machines. We will obviously have to see how these perform in the real world, but at these price points, they seem like they could be compelling competitors to Apple’s new M1-powered devices.