How The Noise Of Big Rockets Breaks Apart Buildings

The engineers who designed and built the Saturn V rocket knew it was a behemoth, but no one was totally... 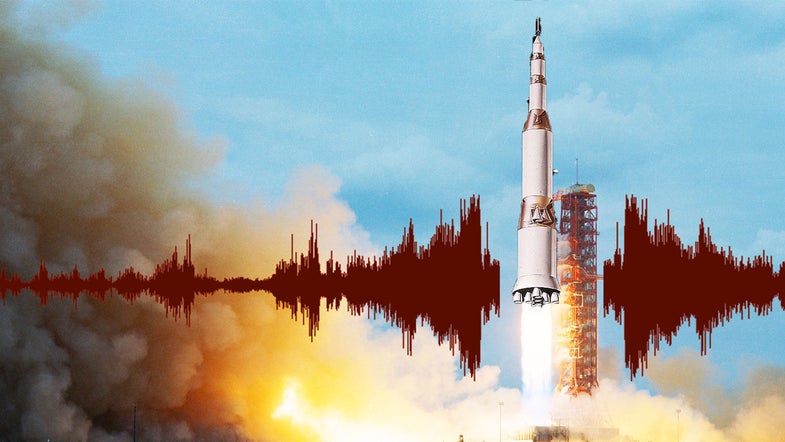 The engineers who designed and built the Saturn V rocket knew it was a behemoth, but no one was totally prepared for what it would be like to actually witness it leaving the Earth. As Apollo 4’s five F-1 engines roared to life on the morning of November 9, 1967, it shook the ground and rattled windows miles away. Onlookers could feel the Saturn V launch, and even though they’d planned for it that physical feeling still amazed engineers.

The Power of Sound

Every rocket launch makes noise, and that noise is a form of power; we don’t necessarily think about it too often but sound is a mechanical wave that we hear because it vibrates the molecules of the medium through which it travels. Properly called “sound power,” in the case of a launching rocket this is the mechanical energy of the exhaust plume defined as the thrust of the rocket multiplied but the exit velocity. That noise is spread across a range of frequencies concentrated in the low to mid frequency range, exactly the range where the waves can damage a building or hurt a human.

This acoustic environment of a launching rocket comes in two stages. The first is holddown, when all the first stage engines are firing but the arms are keeping the rocket in place so it builds thrust. The second is lift-off when the rocket actually starts to fly. The specifics are different but both cases produce a dynamic load on the exposed facilities like the launch tower, ground support equipment, and even nearby buildings like the firing room. Pressure waves fluctuate, generating structural vibrations that can be enhanced or transmitted through structures and even the atmosphere.

And with a rocket launch the sound waves tend to be in the low to mid frequency range, which are just right for the transmitted energy and power to cause damage. Basically everything shakes, and if it shakes hard enough or in the right frequency as a structure, there’s a real chance for damage.

Well before the Saturn V was built, engineers knew the intense acoustic environment associated with a massive rocket launching would be sufficiently significant that it couldn’t be ignored. Especially if that rocket flew straight from the Earth to the Moon. 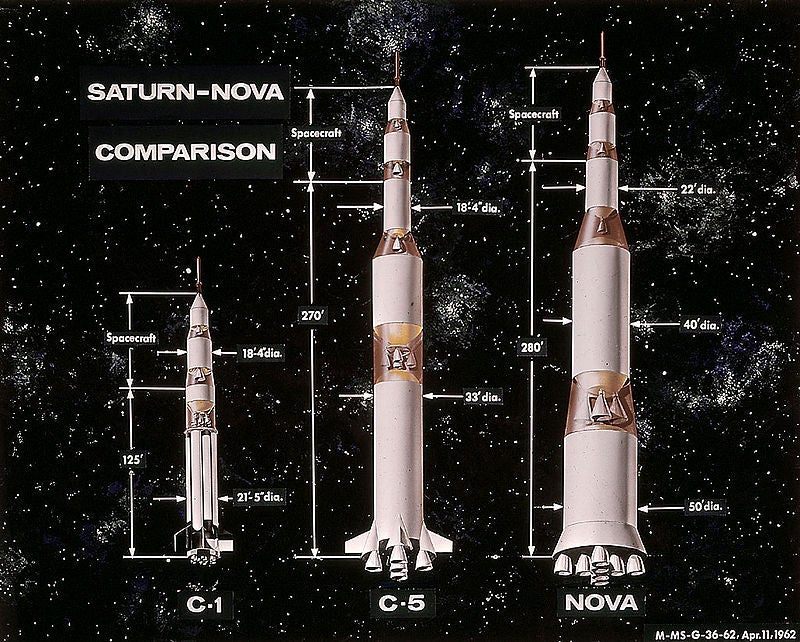 An early Saturn C-1, what became the Saturn V, and the Nova side by side for comparison.

Before NASA settled on the familiar lunar orbit rendezvous mission mode for Apollo, the one that sent a modular spacecraft to the Moon such that the heavy command-service module could be left in Earth orbit, the agency considered the straightforward brute force approach of direct ascent. Exactly as the name suggests, this mode had the rocket fly directly from the Earth to the Moon without pausing in orbit around either body. The full spacecraft would land on the Moon’s surface then follow the same direct path home after the crew had finished surface operations.

The rocket to support this mission was a concept called Nova and it dwarfed the Saturn V. The Saturn V had five F-1 engines in its first stage to generate 7.5 million pounds of thrust at launch. Nova was designed to use eight F-1 engines for a total of 12 million pounds of thrust. It was so big and powerful that when the concept was first imagined engineers were really concerned about the acoustic profile of its launch.

From Land or From Sea

In the late 1950s, the Saturn family of rockets was just coming into being when engineers started troubleshooting how best to deal with the acoustic environment of a massive rocket launching.

Engineers took data from early Atlas launches and scaled it up to get an estimate of the sound power of a Saturn rocket. And it was significant. It looked like the relatively small Saturn C-1 would be powerful enough to generate acoustic levels as high as 205 decibels 1,000 feet from the launch pad and peaks of up to 140 decibels, the threshold of pain, within 10,000 feet of the launch pad. There was some concern, too, that the Saturn would create a shock wave low enough to the ground to damage surrounding residential areas.

One engineer from the Army Test Office’s Facilities Branch, Livingston Wever, came up with a novel solution. Rockets had been launching from Cape Canaveral for years, but they were small. If launching bigger rockets from the Cape was going to be a problem, why not move the launch site offshore to use the ocean as a means to dampen the acoustic profile of a launch?

Wever proposed using a modified Texas Tower as an offshore launch platform for Saturns and other big rockets 105 miles southeast of Cape Canaveral and a little under 35 miles north of Grand Bahama Island. Other ideas included creating a landfill, isolated island of sorts to serve as the launch site.

This idea was eventually studied in a report for Kurt Debus, the man who directed launch operations at Cape Canaveral and became the first director of the Kennedy Space Centre. The survey came back favouring the Texas Tower. This was a kind of structure that could be built in deep water where launch acoustics wouldn’t be a problem. It would also be remote enough that facilities could be easily expanded to accommodate other, bigger rockets in the future. There was a cost benefit to keeping fuel stores on barges rather than facilities on land.

An early concept for an offshore launch platform.

There was some question as to what exhaust vented into the ocean would do, whether it would create waves big enough to damage the pad. But ultimately the bigger worry was the high cost of marine construction, the logistical problems of launch support at sea, and issues of stability for erecting and handling delicate rocket stages pre-launch. There was also the danger posed by storms. In 1961 an USAF early warning system on a Texas Tower was destroyed in a storm taking 28 lives in the process.

In spite of benefits, the idea of offshore launch sites didn’t last. When NASA chose the smaller Saturn rocket over Nova for the Moon missions data came back saying the acoustic profile of this rocket was not so damaging as to necessitate an offshore launch site so long as there was adequate space. Then compromise was to use Merritt Island as an acoustic buffer zone.

But it wasn’t as simple as that. There would still be structures on and near the launchpad that had to be designed with the acoustics of launch in mind. Namely the Vehicle Assembly Building. Acoustic pressure and vibrations associated with a Saturn V launch was something engineers had to think through because even though the launch complex was three miles from the VAB the anticipated sound power of about 145 decibels could damage the structure. The solution was to build the VAB using insulated aluminum panels fastened to steel girders to protect it and anything inside from the acoustics of a launch.

Apollo 11’s Saturn V rolls out from the VAB.

Offshore launch facilities haven’t totally died off as an idea. One report from the 1989 Space Congress Proceedings argued that this could be a worthwhile investment for a future where rockets would likely get bigger and louder. The argument pointed specifically at the limited space for expansion at both the Kennedy Space Centre/Cape Canaveral Air Force Station as well as Vandenberg Air Force Base. A deepwater mobile launch platform could support rockets of various sizes launching with varying regularity without taxing existing sites, impacting the surrounding natural environment, or posing a threat to nearby populations. Of course, it would still be a technical challenge, but as offshore oil drilling matures, the report argues, so too does the potential technology for an offshore launch platform.

But the question of offshore launch platforms has been pretty moot since nothing close to the size of the Saturn V has launched since that rocket’s final flight in 1973. But now SpaceX is proposing launching the Interplanetary Transportation System from launch complex 39, the same pad from which Saturn V’s launched Apollo missions to the Moon. That means the VAB will still be three miles away when this much larger and therefore louder rocket with a bigger acoustic impact leaves the Earth. We’ll have to wait and see if a study into this rocket’s acoustic profile forces a new launch site, perhaps offshore.