Curiosity Pays A Visit To The Intriguing Dunes Of Mars 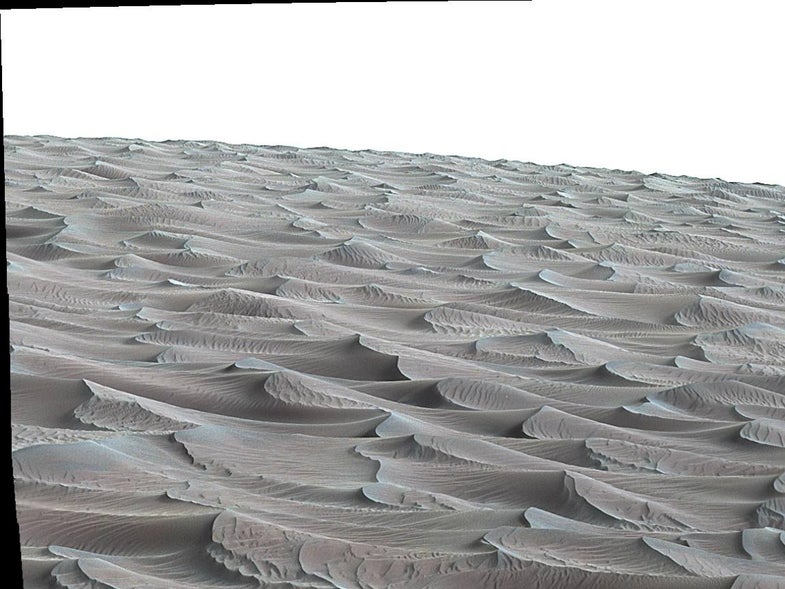 A more extensive view of the area is available here. NASA/JPL-Caltech/MSSS
SHARE

The “Bagnold Dunes” surround the mountain’s northwestern edge. Some are as tall as a two-story house, and they’re very active. Satellite imagery shows the Martian winds shift the dunes by as much as 3 feet per year.

Curiosity’s arrival at the dunes is not only a first for a Martian spacecraft, but for all of space exploration. “No active dunes have been visited anywhere in the solar system besides Earth,” says a NASA press release.

The rover will scoop up a sample of the dune material to analyze in its onboard laboratory. It’ll look for clues about the dunes’ composition and how the wind shapes the dunes. For example, “These dunes have a different texture from dunes on Earth,” says Nathan Bridges from the Curiosity team. “The ripples on them are much larger than ripples on top of dunes on Earth, and we don’t know why. We have models based on the lower air pressure. It takes a higher wind speed to get a particle moving. But now we’ll have the first opportunity to make detailed observations.”

Curiosity’s primary objective right now is to explore Mount Sharp, a layered, 18,000-foot mountain that rises up out of Gale Crater. The rover’s goal is to check out as many of those rock layers as possible. Just as layered sediments on Earth provide a window into the past, scientists are hoping the layers of Mount Sharp will provide some insight into Mars’ geological history.