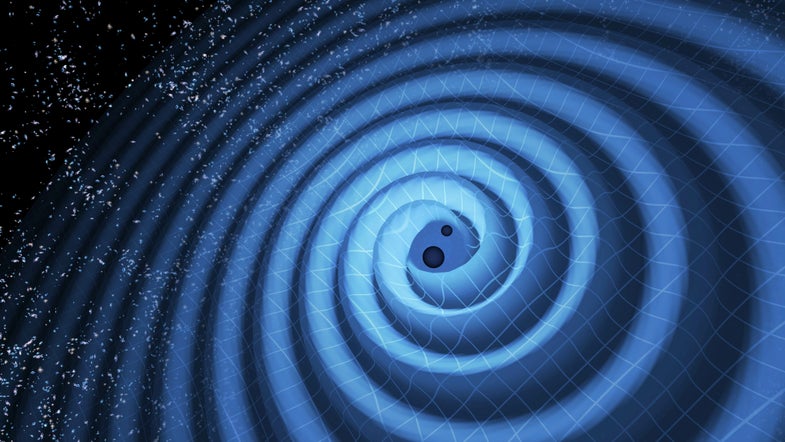 Two black holes whirled violently towards each other, under the pull of the immense gravity between them, combining into a mass around sixty times that of our own sun. They collided with such force they created a disturbance in spacetime itself. In September of 2015, the disturbance made itself known on Earth as an infinitesimal shiver in two 2.5-mile-wide L-shaped tubes. In December, the day after Christmas, the tubes shivered again.

“It’s wonderful,” David Shoemaker, Director of the Massachusetts Institute of Technology’s LIGO lab, told Popular Science. “It’s so different from the first one … but its importance is no less.”

LIGO is a team of over a thousand scientists running the largest experiments the National Science Foundation has ever funded. “It takes a village,” Shoemaker reminded us. The Virgo team, LIGO’s European counterpart, also worked on the data analysis as they get their own detectors up and running.

Albert Einstein’s theory of general relativity predicted that gravity forms ripples like a rock falling into water, except, instead of water, the waves travel by changing the shape of space itself. These gravitational waves are smaller even than the parts that make up our atoms, so they require gigantic L-shape instruments to detect, two and a half miles on each side: the LIGO detectors, which are in Washington State and in Livingston, Louisiana.

The detectors are (very simply) a laser that shines through a special kind of mirror that splits the beams in two, sending one beam down one side of the L and one beam down the other. Each beam hits a mirror at the end of its tunnel and returns to that middle mirror, which puts the beams together and sends them to a detector. Light travels as a wave, too, and normally the waves of each laser are lined up. If a gravitational wave hits, then space-time will change shape in one of the tunnels, and that light beam will go in and out of phase from the other on the detector. There are two LIGO sites, so scientists can confirm that there really was a gravitational wave event and not just a fluke in one of the experiments, and so they can approximate where the wave came from – it took the newest waves about 1.1 milliseconds to travel between the locations, so we know the wave came from the direction of the detector that measured it first.

A benefit of gravity traveling in these spacetime-compressing waves is that they can be interpreted as sound waves and listened to. While the first wave sounded like a quick bloop, like someone making the water-dripping-from-a-drain sound with their mouth, the second set of black holes took a longer amount of time to collide, since they weighed less. Their corresponding sound started with a lower hum that lasts for almost a second before blooping.

Scientists think the second wave event is important for a lot of reasons. Shoemaker notes that, above all, this event showed that the first one wasn’t a fluke, establishing that these experiments really can be used as observatories to detect crazy events in space. He also told us that since the black holes were smaller this time around (the first event’s black holes were around 29 and 36 times the mass of our sun, but these two black holes were around 14 and 7.5 the mass of our sun), the signal was much quieter, and put LIGO’s computers to the test. The tiny signal needed to be filtered out from all the natural jitters that happen in the background. Signals like this second one, called “GW151226,” are much more like what LIGO scientists should expect to see moving forward.

“Most of the signals aren’t going to stick out like the first discovery,” Robert Garisto, editor of Physical Review Letters who published LIGO’s most recent paper, told Popular Science. “They’re going to require processing like this. So the processing really worked.”

The next step for LIGO will be to increase its sensitivity, which will allow scientists to observe gravitational waves from a volume of space twice as large as the observatories can see currently. The Virgo experiment, similar to LIGO but in Europe, will also turn on in the coming year, and three detectors together will allow scientists to pinpoint where the waves came from. Plus, so far, scientists have only seen gravitational waves from black holes. Shoemaker is looking forward to seeing waves from other types of events we know less about, like a neutron star colliding with a black hole… or maybe they’ll see something even weirder.

“Then we’d say [to the theorists], ‘here’s a gravitational wave we can’t explain — do your best,’” Shoemaker said. “That would be a really exciting challenge to take on in the physics community.”

This article will be edited as more information is announced at today’s press conference.