There's an ever-so-slight chance the asteroid could impact Earth in 2036. 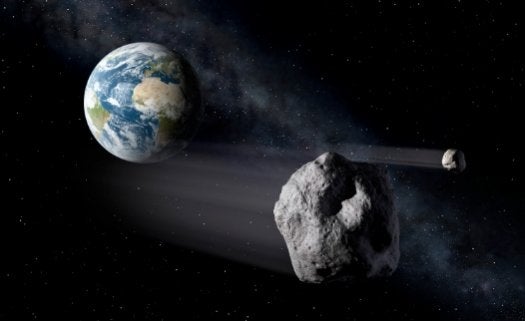 Although not nearly as threatening as it was first perceived to be upon its discovery, the asteroid 99942 Apophis still has a very slight chance of impacting our planet on Friday, April 13, 2036. It will get closer to Earth this year, giving astronomers a chance to refine its trajectory for good and know whether we’re in trouble. And you can get a glimpse of it online tomorrow, courtesy of the Slooh Space Camera.

The 27-megaton asteroid has a diameter of roughly three football fields, and would pack a society-ending punch if it really impacted Earth. So astronomers are interested in nailing down its trajectory and characteristics.

At its maximum brightness, it will still be quite dim, with an apparent magnitude of 19.7. That’s not bright enough for a backyard telescope, but it should be enough for telescopes in remote spots like the Canary Islands, where Slooh’s is located. The Arecibo Observatory and other radio observatories will also be watching.

It is named for the Egyptian god Apep the Uncreator, who tried to swallow the sun god Ra as he crossed the sky. The Greeks called him Apophis, and he personified death, destruction and chaos.

Originally, asteroid Apophis was thought to have a 2.7 percent chance of impacting Earth in 2029, but this was later dramatically reduced. It will still give Earth a close shave, flying by within the range of our geosynchronous satellites. And there’s a very small chance that during that approach, Earth’s gravitational influence will tug on it just enough to bring it back for good in 2036. Understanding its spin direction, size and other characteristics will help answer that question.

Or, new measurements could also confirm it will safely pass more than 30.5 million miles from Earth in 2036. Meanwhile, you can take a look at it here. 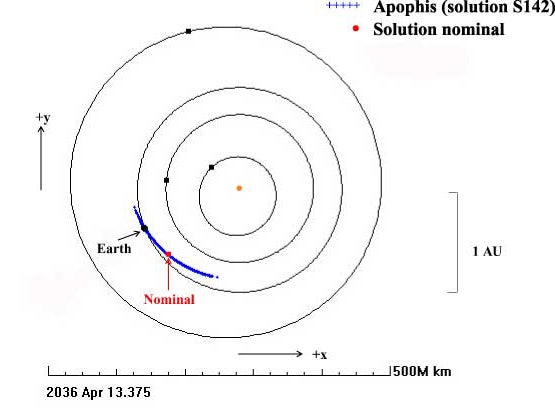 This illustration shows the possible positions of Apophis in 2036 (3-sigma region in blue) under the Standard Dynamical Model. The 3-sigma uncertainty in heliocentric longitude, with two more radar experiments and additional optical measurements, is now ~72 degrees. The most likely Apophis encounter distance is 0.32 AU. However, the Earth still encounters the uncertainty region at -2.4 standard deviations, producing a small possibility of impact.
Space