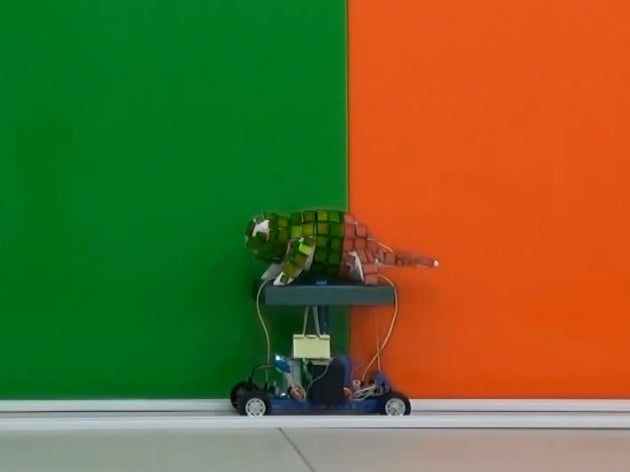 This 3D-printed plastic chameleon can change color with the aid of bumps made of gold and silver on its skin. G. Wang et al., ACS Nano
SHARE

Chameleons are masters at rapidly changing the color of their skin to camouflage themselves or communicate with others. Scientists worldwide have long sought to mimic the skins of these reptiles to render people effectively invisible with chameleon suits.

Now a mechanical chameleon from China can change color to almost every hue in the visible spectrum with the aid of bumps made of gold and silver on its skin, researchers say. The scientists published their work this past month in the journal ACS Nano.

Materials scientist Guoping Wang and his colleagues at Wuhan University in China 3D-printed a plastic chameleon that they covered in square electronic scales. Each scale had a thin film of glass on top of a backing of indium tin oxide, a transparent conductor often used in touchscreens, video displays, and solar cells, which helped the scales generate electric fields.

These scales had rows of microscopic holes etched into their glass. The researchers then filled these holes with gold bumps and topped them with a layer of gel containing silver. If an electric field was run through each scale, the electricity could either deposit or remove silver from the gold bumps, depending on the polarity of the electricity. Then, by altering the size and shape of the gold and silver filled bumps, the researchers could easily change the color of the scales to anything in the visible spectrum.

To test out their work, the researchers placed simple color sensors in each of the mechanical chameleon’s eyes to help it sense the color of its environment. They found its scaly armor could quickly automatically blend in with its surroundings.

In the future, Wang says, these artificial chameleon scales could be fabricated onto flexible backings to create a color-changing camouflage for military soldiers. The researchers added these devices, technically known as “plasmonic cells,” could also be used in full-color low-power electronic paper and displays. However, they cautioned that they might behave too slowly to play video effectively.