One Small Pawprint: Meet The Astro-Animals That Went Before Iran’s Space Monkey 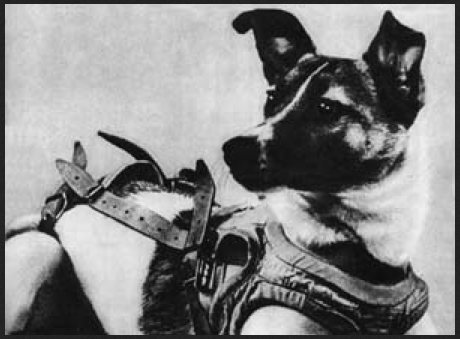 Laika, a Russian mutt, was the first animal to orbit the Earth. She did not survive the journey, but died a hero. Wikipedia
SHARE

This week, Iran claimed it finally succeeded in its long-fought effort to launch a monkey into space. The poor creature did not appear to enjoy the preparations, according to the pained, slightly constipated expression in photographs of him in his safety seat. That got us thinking about the many other animals to have ventured into space before him. A veritable zoo of creatures, from dogs and cats to apes and amoebas, has visited space on our behalf.

Many of them were lost or sacrificed in the name of research, but several had happy endings, returning safely to Earth and living out their days in zoos. Without their sacrifice and the biomedical research it enabled, humans may have been in greater danger when we first tried to visit space. Check out our gallery to see some of the greatest spacefaring creatures. 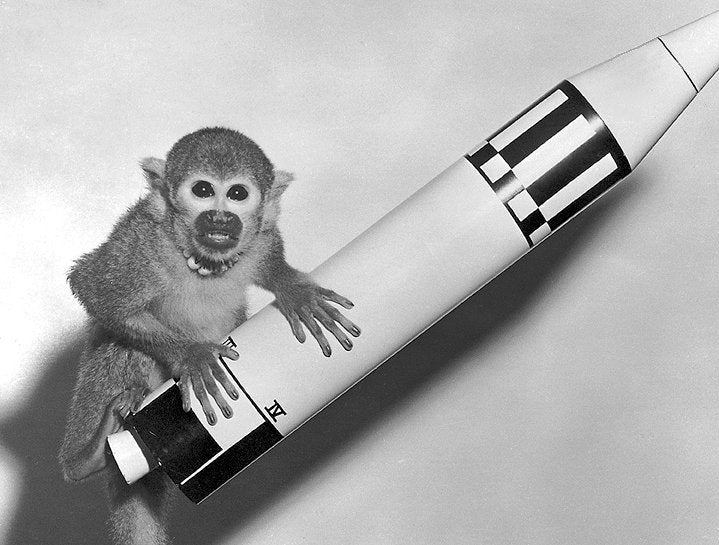 This guy was one of the first two monkeys to survive spaceflight. He lifted off on a Jupiter rocket May 28, 1959, with a rhesus macaque named Able. The monkeys rode in the missile’s nose cone to 360 miles above the Earth, well beyond the eventual orbits of the space shuttle and station. The animals were in microgravity for about 9 minutes, and their spacecraft reached a top speed of 10,000 mph, according to NASA’s History Office. Both survived, but Able died four days later while undergoing surgery to remove a sensor. Incredibly, Baker lived another 25 years until he died Nov. 29, 1984, at the U.S. Space and Rocket Center in Huntsville, Ala. 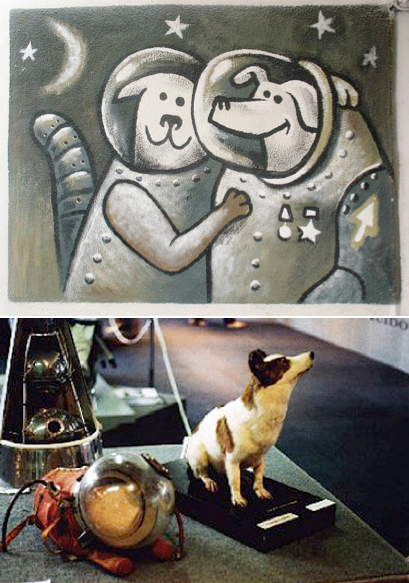 The best-known Soviet spacedog is Laika, a stray who died during her journey as the first orbital canine. But the USSR sent several dogs to space, and most of the cosmodogs survived. Belka and Strelka flew on Sputnik 5 on Aug. 19, 1960 and were the first Earth-born creatures to enter orbit and return alive. From NASA’s History Office: They flew with a grey rabbit, 42 mice, 2 rats and 15 flasks full of fruit flies and plants. All passengers survived. The cartoon shows both famous dogs, and the taxidermied animal at the bottom is Strelka, on a tour in Australia in 1993. 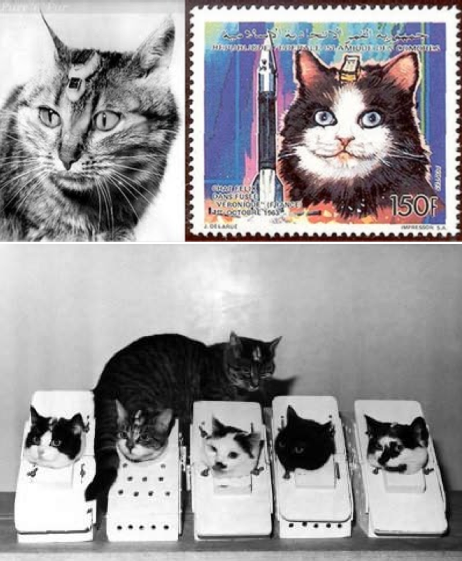 Dogs are more obedient, although NASA’s history office does report that several would-be cosmodogs ran away before their flights. It’s harder to herd cats, but the French tried it anyway. On October 18, 1963, French scientists launched the first cat into space on a Veronique AGI sounding rocket. The cat, named Felix, was retrieved after descending to Earth under parachute. “A second feline flight on October 24 ran into difficulties that prevented recovery,” NASA says. The weird chip shown on the cat’s head is a cranial electrode implant, which transmitted neurological data back to Earth during its trip. The stamp commemorates Felix’s journey. At the bottom, the cats in boxes are actually wearing “space suits,” although NASA never launched any felines into space. 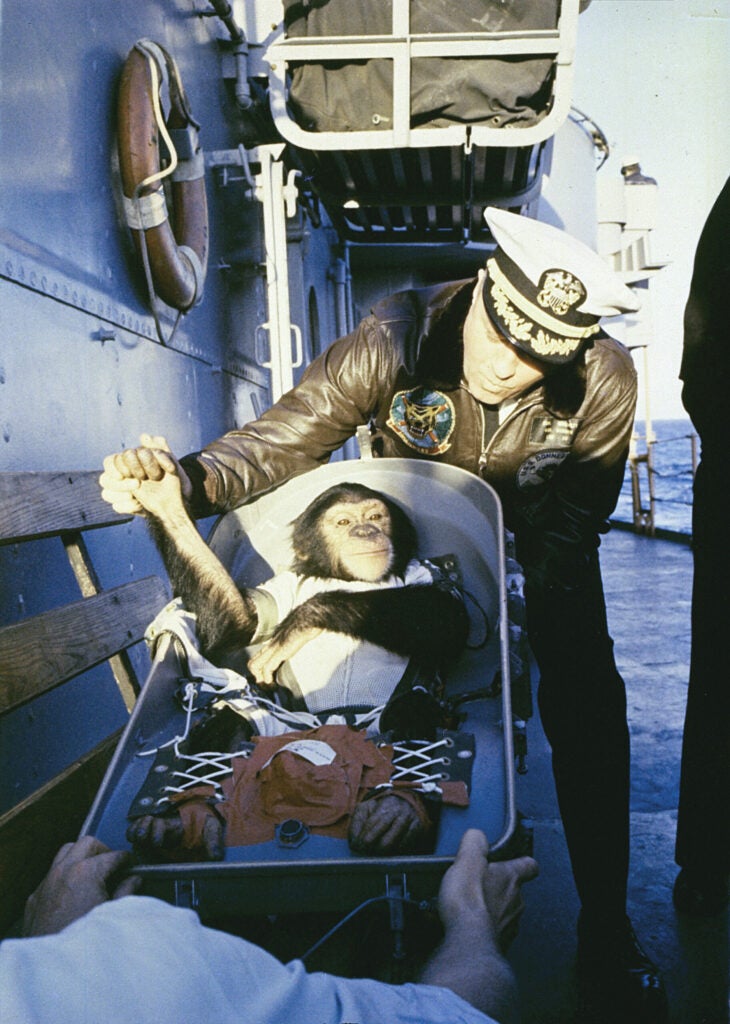 The first ape in space, Ham (an acronym for Holloman Aero Med) flew on a Mercury Redstone rocket a lot like Alan B. Shepard’s. This Thursday marks the 52nd anniversary of his Jan. 31, 1961 flight. Just four years old at the time, Ham performed well on his suborbital journey, reaching an altitude of 157 miles and a top speed of 5,857 mph. In this photo, Ham is seen shaking hands with the commander of his recovery ship, USS Donner (LSD-20). Ham’s mission paved the way for the successful launch of Shepard, America’s first human astronaut, on May 5, 1961. Ham was placed on display at the Washington Zoo in 1963, where he lived alone until September 25, 1980, when he moved to a zoo in North Carolina. He died three years later. 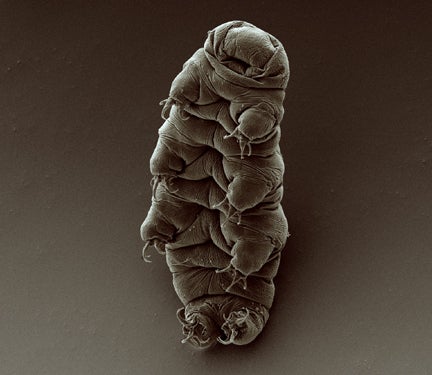 Also known as water bears or moss piglets, these jolly-looking creatures have been found to survive on the outside of spacecraft in the vacuum of space. They can survive in temperatures from just above absolute zero to well above the boiling point of water. Cosmic radiation, ultraviolet radiation from the sun and extreme dehydration neither killed them nor prevented them from procreating, as a 2008 experiment showed. 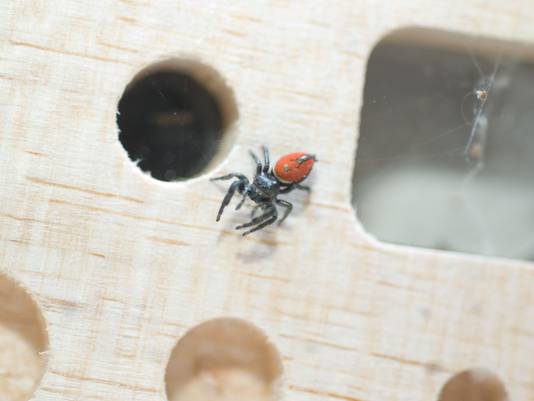 After Apollo 11 landed on the moon, U.S. animal-space research largely turned to biological payloads. Rabbits, turtles, fish, moon jellyfish, amoebae and much, much more have all flown on space shuttle missions and on the International Space Station. The ISS has an ongoing research project examining translucent fish, for instance. One student-designed experiment drew extra attention last year. A spacefaring spider named Nefertiti spent 100 days on the ISS before returning to Earth, in an experiment designed to test whether she could adapt her hunting instincts microgravity. She did, and became a legend among schoolchildren. The “Spidernaut” orbited Earth about 1,580 times and traveled about 41.5 million miles, according to NASA. Nefertiti was set to live out her days as a museum piece, but died shortly after her arrival at the Smithsonian Museum of Natural History.
Animals
cosmonauts
monkeys
Science
space race