How Many Co-Conspirators Can You Have Before Your Secret Leaks? 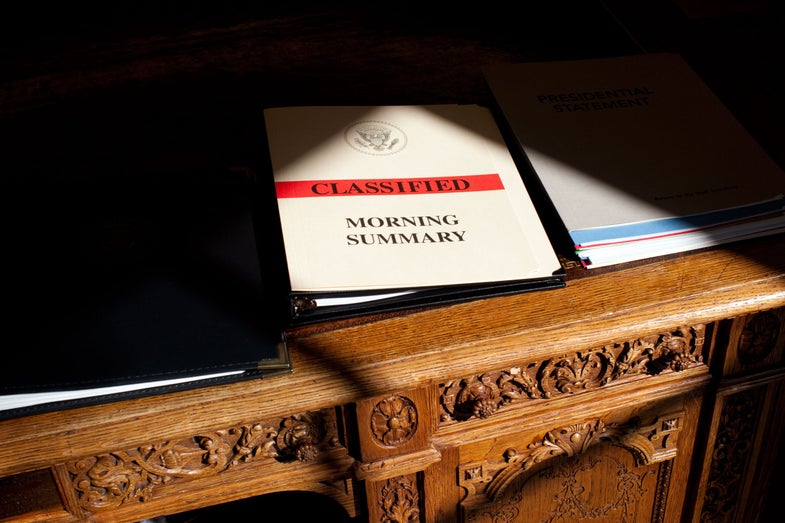 A classified document is framed by shadows on the Resolute Desk in the Oval Office during a meeting with Kenyan professor Wangari Maathai, Oct. 5, 2009. (Official White House Photo by Pete Souza) This official White House photograph is being made available only for publication by news organizations and/or for personal use printing by the subject(s) of the photograph. The photograph may not be manipulated in any way and may not be used in commercial or political materials, advertisements, emails, products, promotions that in any way suggests approval or endorsement of the President, the First Family, or the White House. Pete Souza
SHARE

When you see a superhero or a supervillain heading deep into their super-high-tech super-secret lair, do you ever wonder how the heck they keep that secret?

Did they build this massive thing on their own? Did they get their architecture, engineering, and interior design degrees while they went through that training/backstory montage? No, of course not. They had henchpeople build it for them, outsourcing the complicated stuff to people who knew more about constructing an island fortress than they do. There’s only one problem with that plan. Letting more people in on a secret virtually ensures that it won’t stay secret for long.

In a new paper published in PLOS One Oxford University physicist David Robert Grimes argues that the more people are in on a conspiracy, the less likely it is to be a successful conspiracy for long. Even with almost everyone dedicated to keeping it secret, it’s only a matter of time before something slips, and, Grimes calculated, on average, the more people involved, the smaller that amount of time is.

In order to figure out the average length of time before someone blows a conspiracy’s cover, Grimes looked at three well-documented conspiracies. One, the reprehensible Tuskegee syphilis experiment lasted for a long time, nearly 25 years. The other two, the FBI forensics scandal and the NSA’s PRISM program took less time to come to light. (Each was uncovered in about six years.)

By giving those conspirators the benefit of the doubt (assuming that everyone was trying to keep that secret, and that external forces like journalists or advocacy groups couldn’t uncover it) Grimes placed the chance of a leak, whether deliberate or accidental at 1 in 250,000. That’s the best case scenario for the probability of failure per unit of time per conspirator. With that, he could begin looking at purported conspiracies and extrapolate how long it would have taken for them to be uncovered if everything went extraordinarily well for the secret keepers.

“A number of conspiracy theories revolve around science.” Grimes said. “While believing the moon landings were faked may not be harmful, believing misinformation about vaccines can be fatal. However, not every belief in a conspiracy is necessarily wrong – for example, the Snowden revelations confirmed some theories about the activities of the U.S. National Security Agency.”

Among the more entrenched conspiracy theories are the ideas that the moon landings were a hoax, that climate change is a conspiracy, that ‘they’ are covering up a cure for cancer, and that vaccines cause cancer. These ideas have been around for decades, but taking into account the vast number of people that would have to be involved with each conspiracy (hundreds of thousands), Grimes found that under the best case scenario, it should have only taken a little over 3 years for conspiracies of that magnitude to come to light.

And for those of you planning a conspiracy, Grimes has some helpful numbers. If you want to keep things a secret for five years, have less than 2,531 people in on the plot. If you’re shooting for a decade, 1,257 is the largest you can go. And if you want to have a conspiracy that lasts a century or more (like the DaVinci Code) then you need to keep your numbers really small, down to 125 people.

Of course, this is all a thought experiment–in the real world, other factors might come into play, most especially the actions and motivations of an individual person, and also the actions of people outside of the conspiracy, which this study does not fully explore. But it is interesting, and does explain why those top-secret superhero bases in movies never seem to stay secret for very long.

In case you were wondering, Grimes made this funding disclosure in his paper: “This work did not require specific funding, from nebulous clandestine cabals or otherwise.”