Pluto’s Moons Are Flopping Around All Over The Place 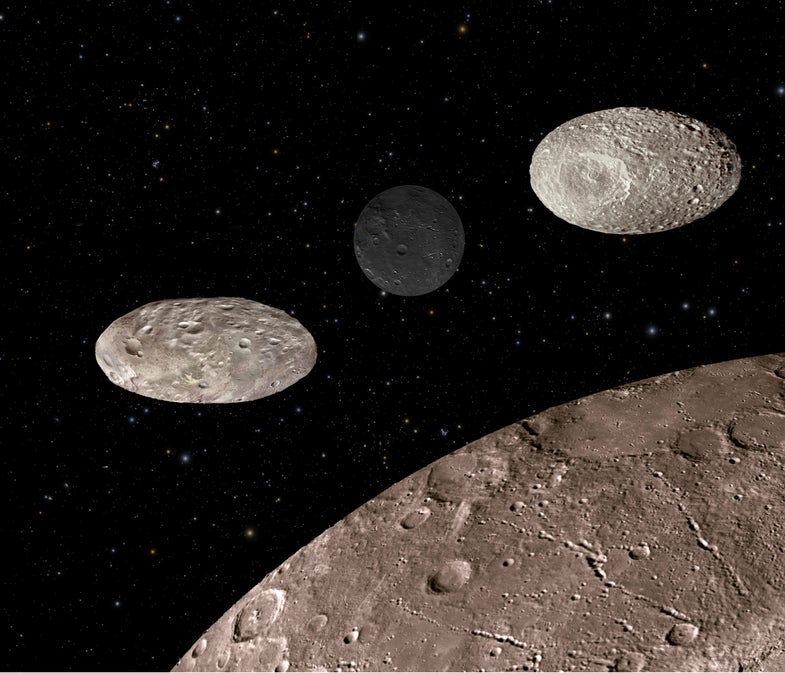 If Pluto were still officially recognized as a planet, it would be considered a part of a binary system. Pluto’s moon Charon is so large and so close that the two end up spinning around each other, sharing a gravitational field. That weird-shaped gravitational field causes problems for the smaller moons that orbit the pair.

Using Hubble imagery to look at the orbits and brightness of Pluto’s moons, a study published today in Nature shows that Pluto’s neighborhood is messier than once thought. For one, the orbits of the smaller moons (cheerfully named after the Greek underworld: Styx, Nix, Hydra, and Kerberos) are wobbly because of the constantly changing gravitational field around Pluto and Charon.

And it doesn’t help that the smaller moons are football-shaped rather than smoothly round. Instead of being good little moons that constantly have one face looking toward their planet(s), they tumble around awkwardly, like this:

Three of the moons–Styx, Nix, and Hydra–are locked together in orbital resonance. So although Pluto’s moons dance to a weird beat, these three are at least dancing in sync, circling the binary pair like clockwork.

Making matters weirder, the smaller moons don’t match. Although Charon, Nix, and Hydra have bright surfaces, Kerberos appears to be dark as charcoal. This is surprising because scientists previously thought the moons formed when a giant impactor crashed into Pluto; if that were true, then all of the moons should be made of the same stuff, right?

All in all, it adds up to a pretty curious case. Scientists just don’t know how Pluto’s weird system formed, but they hope to find out more when the New Horizons spacecraft arrives there in July.

The observations are intriguing because they could give us hints as to what life would be like on Tatooine-like planets that orbit two stars. “We are learning that chaos may be a common trait of binary systems,” study co-author Doug Hamilton said in a statement. “It might even have consequences for life on planets orbiting binary stars.”

Planets that orbit binary stars seem to be common enough in our galaxy, and if they behave anything like Pluto’s binary system, they may not be all that pleasant to live on. According to NASA, if you lived on one of Pluto’s moons, you’d probably have a hard time figuring out when and where the sun would rise each day. But, then again, things may work differently at the larger scale of suns and planets. There’s still hope that somewhere out there, on a planet with two suns, a young Luke Skywalker is learning to become a Jedi knight. He just might have a hard time figuring out what time it is.