New Horizons Spacecraft Gets A Whiff Of Pluto’s Methane

The former planet is frosted in the stuff 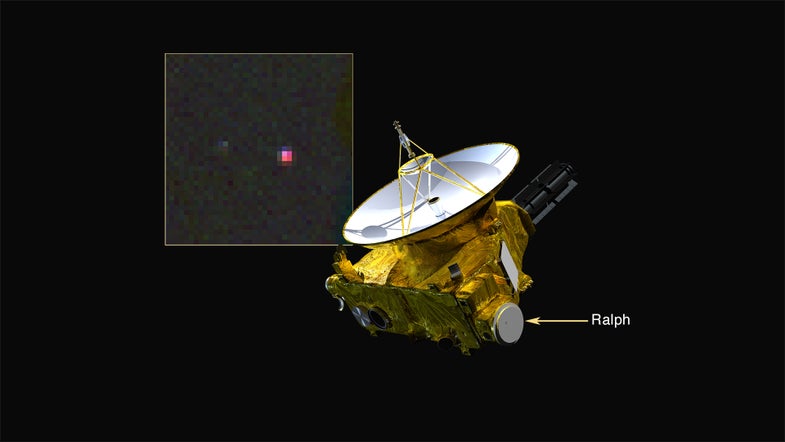 As the New Horizons spacecraft closes in for its July 14 rendezvous with Pluto, its detectors have identified methane on the former planet’s surface. Considering the spacecraft is still 11 million miles away, Pluto must have some strong gas.

Pluto is frosted in frozen methane—the stuff of farts and fuel here on Earth. Scientists first spotted it there in 1976 using ground-based observations, but this is the first time the spacecraft has been able to confirm the observations.

The spacecraft didn’t really “smell” the methane (which, to the human nose, is odorless, by the way). Instead it “saw” the gas with its infrared spectrometer.

Different molecules absorb different levels of infrared radiation. The radiation makes the molecules vibrate, giving off characteristic wavelengths that scientists can use to identify which atoms are in the compound. In this case, the infrared measurements indicated a carbon and four hydrogen atoms, which can pretty much only mean one thing: CH4, methane.

The methane may have been frozen there since the solar system formed 4.5 billion years ago. As New Horizons flies by in mid-July, we’ll get a better idea of how the gas is distributed over Pluto’s surface. Meanwhile, other imaging techniques will help to reveal the composition of the former planet’s thin atmosphere.

Correction, 7/2/2015: An earlier version of this article stated that Pluto’s methane might have been there 4.5 million years ago, when we meant to say billions of years ago. We apologize for this totally dumb mistake.