What’s So Scary About A Nuclear-Armed Drone?

In one word: Everything 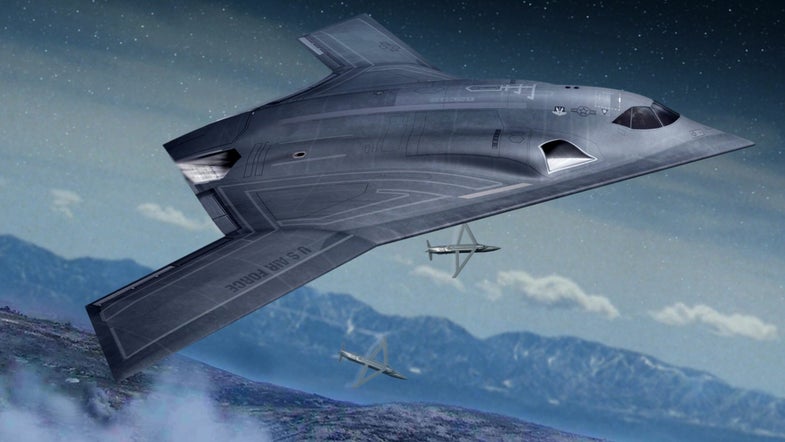 It’s a plane designed for the war no one wants to fight. The Long Range Strike Bomber is the Air Force’s secretive and long-running project to develop the next generation of nuclear-armed bombers, designed to unload hell in hostile skies. And there’s a chance that it’ll be optionally manned, allowing it to fly some missions as a drone.

Sounds pretty terrifying, right? Well, despite years of advancement in unmanned technology, military brass isn’t comfortable trusting a drone with nuclear weapons just yet, even as they develop the bomber of the future.

Almost half of the 159 bombers currently serving within the United States Air Force are B-52s, a class that first entered service in 1961. Of pure bomber varieties introduced since then, only two currently fly: the supersonic B-1 Lancer, and the iconic stealthy black wedge known as the B-2 Spirit. All three were designed to carry nuclear weapons long distances, and together, they formed the bomber leg of America’s “nuclear triad.” (The other legs are nuclear missile armed submarines and intercontinental ballistic missiles in silos scattered throughout the heartland). The triad was an integral part of American strategic planning during the Cold War, but following the collapse of the USSR, it’s taken a bit of a back seat.

This is evident in the size of the B-2 Spirit fleet. Tailless and stealthy, the Spirit is by far the most advanced bomber ever fielded by the USAF, but it was built just as the USSR started collapsing. Political pressure from Congress in the early 1990s, along with a diminished threat kept the fleet of Spirits small. When one crashed in 2008 it left a fleet of just 20 planes. The Air Force wants to avoid the B-2’s small fleet size with their next bomber, hoping to produce between 80 and 100 planes.

Given the tremendous importance of this next-generation vehicle, and the large numbers the Air Force wants, does it make sense to borrow from recent unmanned innovations? On Friday, Popular Science visited the Pentagon to speak with a senior defense official on background about the future of America’s nuclear bombers. When asked if the Long Range Strike Bomber could ever be fully unmanned, the senior defense official told Popular Science they don’t expect to see drones in dynamic, contested spaces, where a nuclear-armed bomber might fly.

The loss of a Global Hawk for a battle means a lack of surveillance and intelligence. The loss of a nuclear-armed bomber would mean something much worse.

Despite their prominence in the American imagination and recent wars, drones haven’t flown much in contested airspace — where a peer or near-peer adversary has had planes and anti-air weapons to use against them. This is both by design and limitation: America’s drone fleet contains slow-flying bombers and scouts, better suited for counter insurgency than a conventional war. That’s as far as drone technology goes right now, but it doesn’t mean drones are limited to that role forever.

Still, there are reasons to keep them out of the nuke fight. An early Cold War project to make an unmanned nuclear-armed bomber was abandoned in large part because of technical constraints with remote piloting. These constraints have largely been overcome, but there are still reasons to keep pilots on board the plane rather than sitting at remote consoles. When asked about advantages that a drone could confer, the senior defense official responded by noting the many advantages of having pilots physically present in cockpits. He also noted that aircraft with pilots on board land where those pilots want them to land.

Losing a remotely controlled aircraft to a hostile nation through electronic warfare has historical precedent, so this isn’t an ungrounded fear. In 2011, Iran famously captured an American RQ-170 stealth surveillance drone, likely through a combination of jamming its communications and feeding it false coordinates. The senior defense official addressed the hypothetical scenario of an unmanned aircraft receiving wrong or false instructions. If an unarmed Global Hawk drone had its datalink cut or jammed, that drone could be rendered useless over the battlefield without shots fired. The loss of a Global Hawk for a battle means a lack of surveillance and intelligence. The loss of a nuclear-armed bomber would mean something much worse.

In a conventional war, or even worse, an active nuclear conflict, the last thing any military commander wants is to lose control over a nuclear-armed plane. When the Long Range Strike Bomber comes to light, it may include an optionally manned capability, but for nuclear armed missions, it’s safe to assume pilots will always be on board.