While much of the buzz at the Zhuhai Air Show has been about new manned stealth Jets in China’s arsenal,... 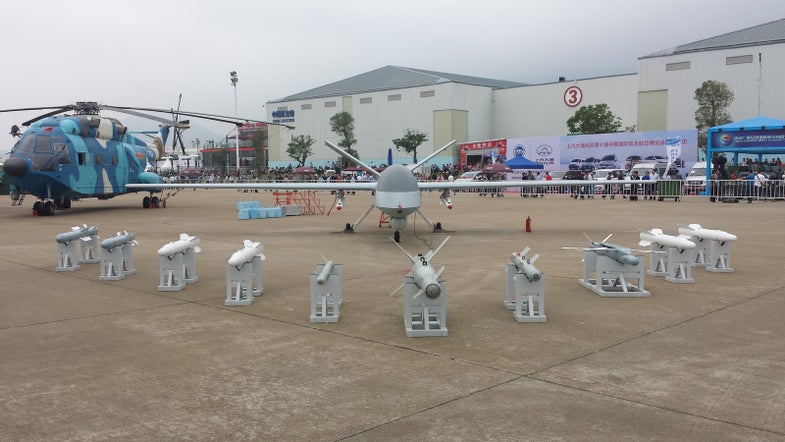 At Zhuhai 2014, the WJ-1 UCAV, formerly known as the Pterodactyl, basks in the glow of interested customers and a wide variety of glide bombs, guided rockets and anti-tank missiles displayed before it. by78 at Sinodefense Forum
SHARE 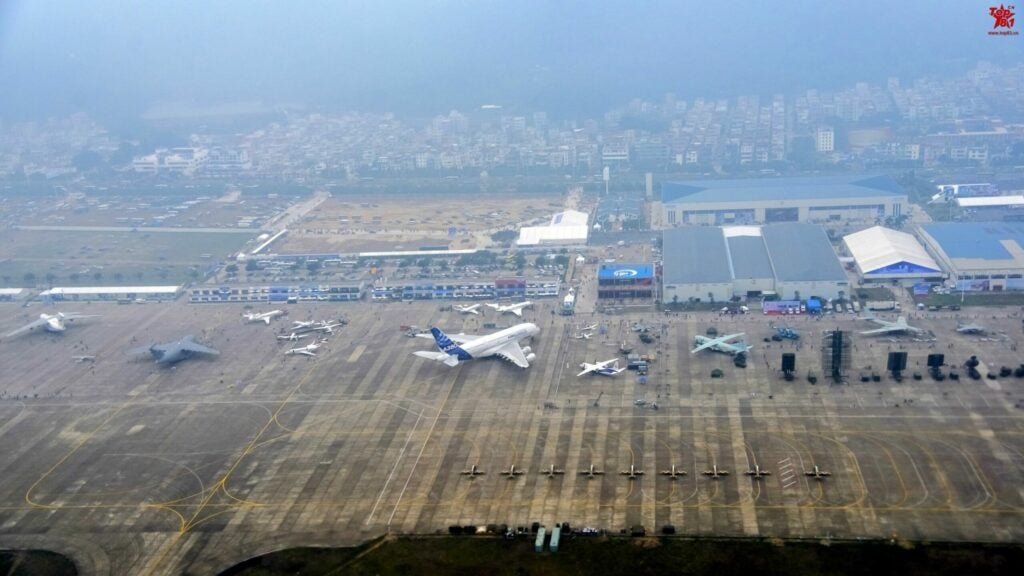 Shown in all its glory from a first class window seat, Zhuhai 2014 is playing host to an arsenal of Chinese military and civilian aircraft, as well as American, European and Russian planes. But what we don’t see is China’s growing and innovative drone industry, which can be viewed indoors at the exhibition halls.

While much of the buzz at the Zhuhai Air Show has been about new manned stealth Jets in China’s arsenal, it has also shed light on how China’s unmanned aerial vehicle (UAV), aka “drone,” industry is making large strides.

GJ-1 “76024” is prepped by Chinese airmen. The GJ-1, in addition to being exported to Saudi Arabia, is China’s frontline attack drone.

The Aviation Industries Corporation of China (AVIC) showed off its GJ-1 UCAV, along with development drones like the VD-200 and Blue Fox. 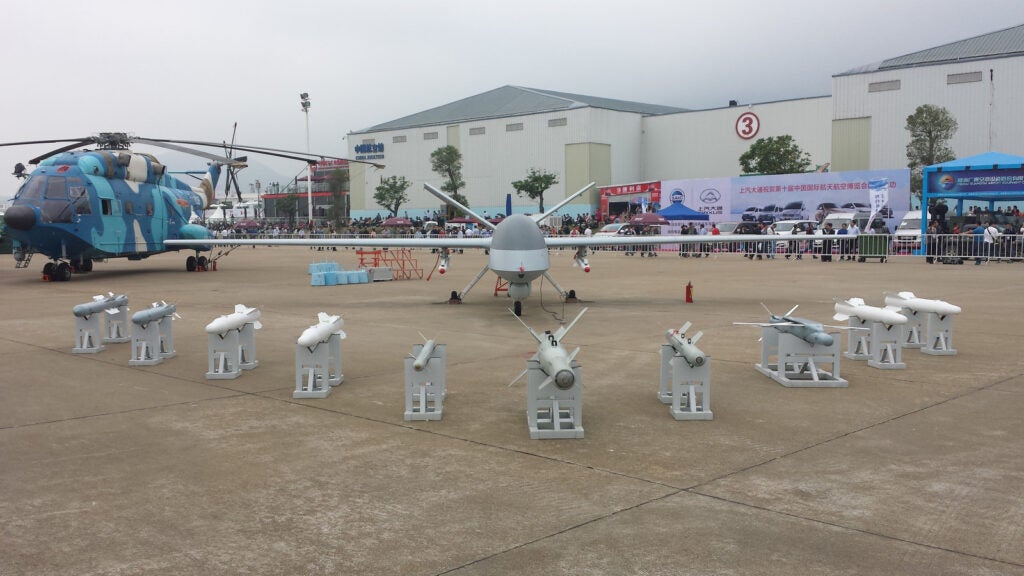 At Zhuhai 2014, the WJ-1 UCAV, formerly known as the Pterodactyl, basks in the glow of interested customers and a wide variety of glide bombs, guided rockets and anti-tank missiles displayed before it.

Fresh off its Peace Mission 2014 debut, the CJ-1 proudly stands behind a wide variety of Chinese guided rockets, anti-tank missiles and glide bombs. “GJ-1” is actually the in service designation of the Pterodactyl UAV, which made defense headlines by dropping anti-tank missiles during the multilateral Peace Mission 2014 exercise. As China’s first UCAV, it is already being exported to Middle Eastern countries; China is less stringent that the U.S. when it comes to exporting lethal unmanned technologies. 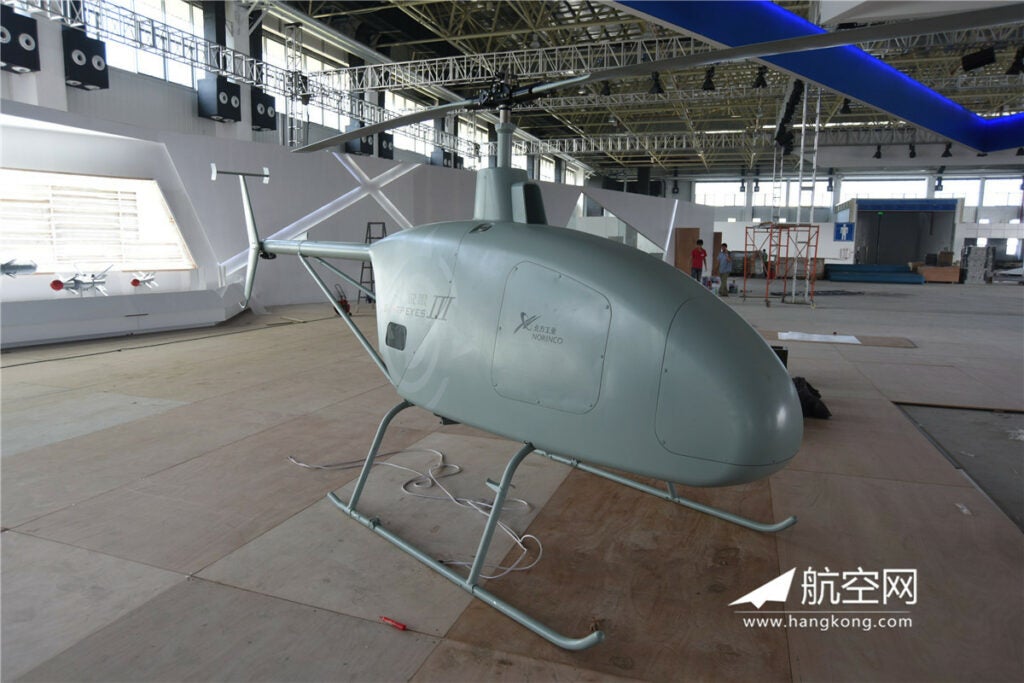 Currently a scout helicopter drone, Sharp Eyes III is used to find juicy enemy targets like tanks and artillery. Given its medium size, it could carry a few light guided munitions in the future, to pack some sharp teeth to match those eyes.

Sharp Eye III drone copter is a NORINCO product, intended for use at the brigade/regimental level. A small to medium helicopter drone, it is primarily used for targeting artillery strikes and patrol, though like most UAVs, it could be armed with light weapons, like the BRM1 90mm guided rocket.

The WJ-600 has some stealth shaping to reduce its vulnerability against radars, as it flies low on the battlefield or training grounds. Right now, it’s meant purely as a surveillance and targeting asset, though like almost all other UAVs, it could be armed with some level of weaponry. 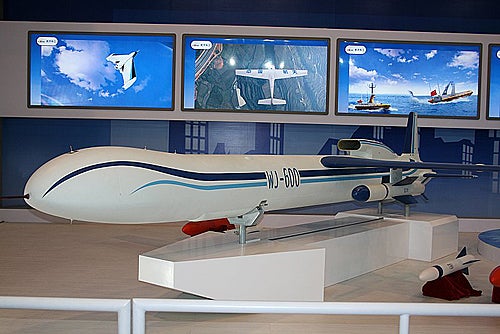 WJ-600 wasn’t always stealthy. Four years ago at Zhuhai 2010, CASIC showed the WJ-600 as an unstealthy attack drone, with one video implausibly featuring it attacking a U.S. destroyer. With the WJ-1 as China’s UCAV, the WJ-600 has gone a facelift (see above).

Target drones and decoy UAVs have not captured public imagination the way the hunter killer drones like the US Predator class has, but going back to the early Cold War, they fulfill some of the oldest unmanned aerial missions. CASIC’s WJ 600 Stealth UCAV is shaped like a cruise missile, with stealthy characteristics including a recessed turbofan engine to reduce its radar cross section. While the WJ-600 could simulate stealthy cruise missiles like the U.S. LRSAM during Chinese training, its manufacturer states it can perform missions like combat surveillance, targeting and patrol. Interestingly, a less stealthy version of the WJ-600 was shown at Zhuhai 2010, armed with antitank missiles. The 2010 iteration of the WJ-600 was the star of a CGI video showing it somehow attacking an U.S. Arleigh Burke class destroyer. 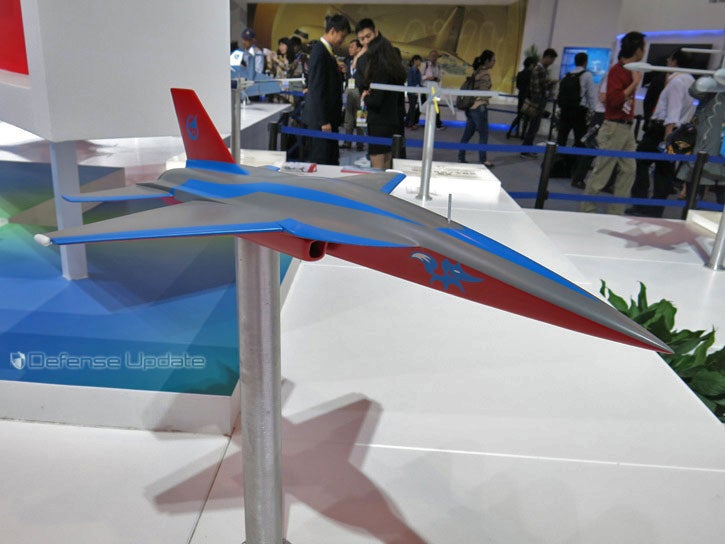 Using the highly maneuverable and fast airframe of the L-15 advanced jet trainer, the Blue Fox is meant to test the effectiveness of air defense systems, such as the HQ-9 SAM.

AVIC’s Blue Fox UAV is a smaller, unmanned version of the L-15 advanced jet trainer; it has two turbojet engines with a total of 12 tons of thrust. The Blue Fox can simulate the flight performance of modern fighter jets during surface to air missile testing, though it shouldn’t take too much to use it as a supersonic UCAV once afterburners are added. 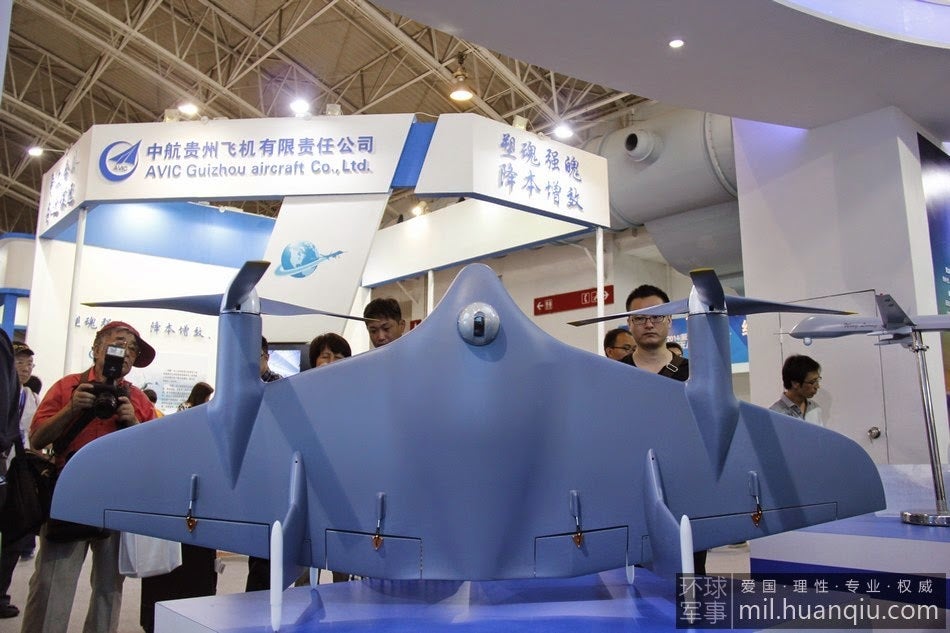 The VD-200 takes off from the upright position shown here, and then reorients itself to level horizontal flight. Compared to the similarly sized RQ-7, it doesn’t require a catapult or runway to take off, making it easier to use in urban environments and by special forces.

The 200kg VD-200 VTOL is another interesting Chinese UAV. It takes and lands in a vertical position, but flies in an horizontal direction for 6-8 hours with 20kg of sensors, or small bombs. The VD-200’s small footprint would make it a very good fit for urban infantry and maritime security ships that would like to have a RQ-7 sized UAV.

Speaking of water operations, the S-100 UAV is fully buoyant, meaning that it is a drone that can take off and land on water like a manned seaplane. Shanghai UVS Intelligence Systems Co notes that the S-100 can fly for 8 hours and carry a very large payload of 240 kg. In addition to serving as the eyes of maritime and naval patrol ships, the S-100 could provide a convenient UCAV capability for waterborne Chinese special forces. 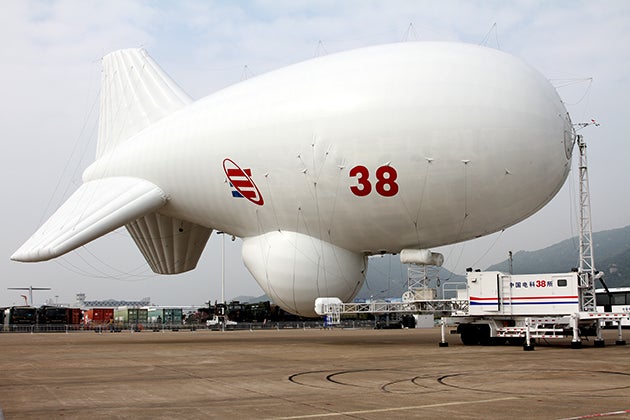 CTEC shows off its 1,600 cubic meter Vehicle Tethered Aerostat System at Zhuhai 2014. This aerostat is primarily intended for urban safety and border patrol missions, but its larger 8,000 cubic meter brother would likely have military missions, such as cruise missile defense.

China Electronics Technology Corporation is marketing its aerostat family; a 1,600 cubic meter version of the VehicularTethered Aerostat System is on display at Zhuhai. The 16m long aerostat reaches an altitude of 1,000 meters and is intended for law enforcement purposes, as well as being resistant to typhoon strength winds. The largest of CETC’s aerostats, with a volume of 8,000 cubic meters, can stay up for 30 days. The larger aerostat would probably have military missions by using their high altitude to detect low flying cruise missiles over hundreds of miles. 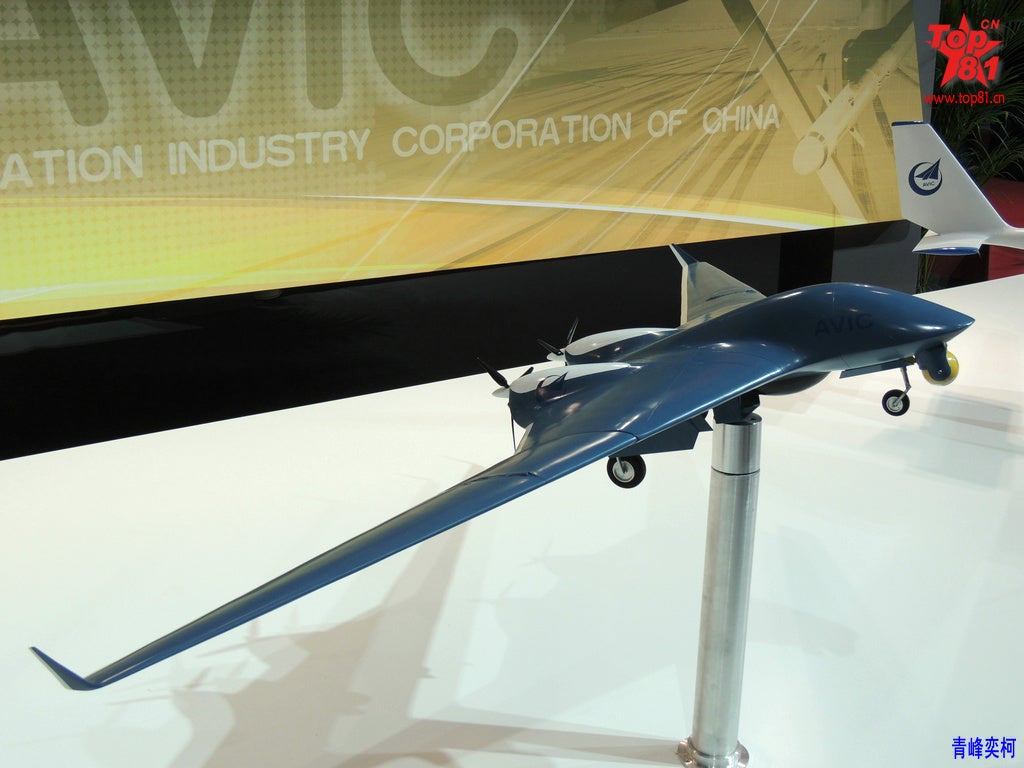 The Harrier III is a prop-powered flying wing, which gives it greater endurance and payload compared to more traditional UAVs like the Predator. With 700kg of payload, it’s likely to have a substantial attack capability.

Harrier III drone concept is also a past Zhuhai attendee, having appeared in 2012 and other Chinese trade shows since then. While it resembles flying wing drones like the X-47B and RQ-170, it uses two propellers to more efficiently operate at lower speeds. The Harrier III has a heavy payload of 700 kg, compared to its overall weight of 2 tons. The Harrier III can say aloft for 24 hours, its endurance wouldmake it a valuable intelligence gathering and “high value target” strike platform. 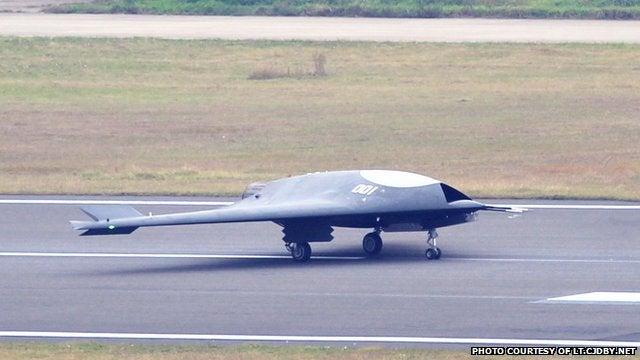 China’s most advanced drone, the stealthy Sharp Sword UCAV, first flew at Hongdu’s airfield in November 2013. The Sharp Sword is China’s answer to western stealth drones like the X-47B, RQ-170, Taranis and Neuron. We may see it fly by at a future Zhuhai airshow.