It's David's sling, but who's Goliath? 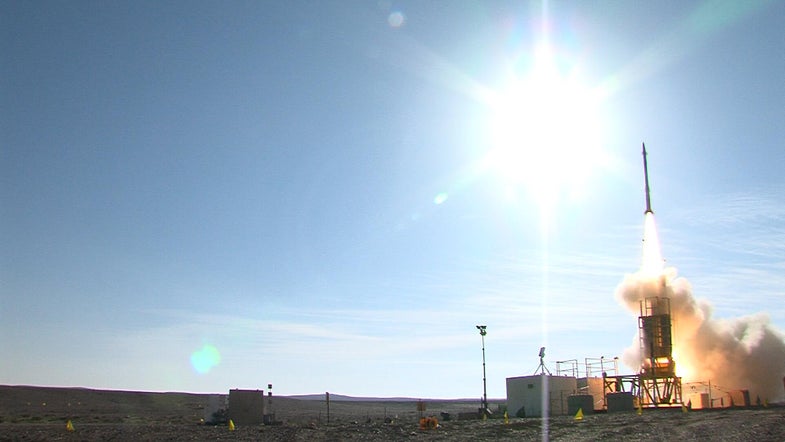 Israel’s latest missile draws its name from a biblical tale. The “David’s Sling” missile references the classic story of how a lightly armed shepherd bested a towering warrior by pinning him right between the eyes with a well-placed stone. Instead of giants, this new weapon wants to catch hostile missiles in mid-air and blow them up.

In the demonstration video below, a fighter jet releases a missile. That’s the target. A ground-launched missile flies up to intercept it, and in a combination of video footage and computer-rendered graphics, we see the David’s Sling successfully destroy its mark.

The interceptor missile, also known as the “magic wand,” is a collaboration between Israeli arms maker Rafael and American missile giants Raytheon. (Raytheon has decades of experience in designing missile defense systems). David’s Sling isn’t Israel’s first missile interceptor; they have had American-made Patriot missiles since the 1980s, and the well-known Iron Dome system is designed to shoot down smaller, low-flying rockets. David’s Sling will complement that by aiming bigger and higher, intercepting plane-fired missiles, short-range ballistic missiles, larger rockets, and cruise missiles.

While the Iron Dome and David’s Sling systems offer complementary protection, they offer it from fairly different threats. Iron Dome’s anti-rocket batteries are used against rockets fired by Hezbollah and Hamas, cheap and simple weapons characteristic of asymmetric warfare. By contrast, David’s Sling is most useful against larger, expensive weapons, ones that almost always require a nation’s backing. Historically, Israel has been involved in state-to-state warfare with all of its neighbors and many other countries in the region, but currently the Air Forces of most of Israel’s neighbors and former foes are occupied elsewhere. Syria’s brutal dictator Assad is embroiled in a civil war against many parties, including the horrific ISIS. Iraq, which under Saddam Hussein had hurled cruise missiles at Israel during the Gulf War, is also actively involved in the fight against ISIS. Egypt, which fought several wars against Israel between 1948 and 1973, has been formally at peace with Israel since 1978. Jordan, similarly, has a peace treaty going back decades.

When complete, David’s Sling could protect Israel from any of those countries, but there’s one direct foe it seems to address. The tensions between the Netanyahu government in Israel and the Khamenei government in Iran are legendarily high. This week in Lausanne, Switzerland, Iran is involved in negotiations with several major nations including the United States about the future of Iran’s nuclear program. Early in March, in advance of those negotiations, Netanyahu gave a speech to the U.S. Congress condemning the negotiations with Iran.

In this light, David’s Sling is less a defensive measure against a plethora of active threats, but is instead a carefully placed shot aimed to counter exactly one Goliath.