Quadcopter Launches ScanEagle Drones From Its Belly, Catches Them In Mid-Air [Video]

No need for nets 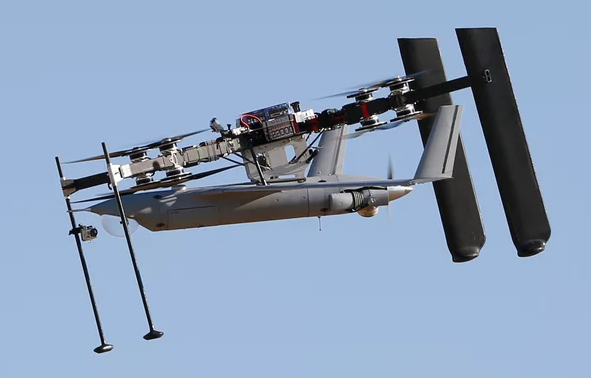 The ScanEagle, first flown in 2002 and in service in the military for a decade, is an odd duck. Adapted from a scouting drone used for fisherman, it’s not really built for normal take-offs and landings. Insitu, the makers of the ScanEagle, last week debuted a new launching system that uses a quadcopter to carry the plane-shaped ScanEagle into the sky and release it into takeoff. Later, when the Eagle is done flying, the quadcopter catches it in mid-air and returns to the ground. It’s vertical takeoff and landing, with a buddy.

For the landing, the quadcopter hangs down a hook and tether, which the ScanEagle snags. Then it gently lowers to the ground.

Normally, a ScanEagle takes off from a metal rail, and then returns by flying into a powerful hook that snags it out of the sky. It’s adapted from a drone made for fishermen, and there’s not a lot of room on a ship for runways or landings.

The new system is called FLARES, for “Flying Launch and Recovery System”. It replaces the hook and rail system by combining them into one single platforms that launches the ScanEagle and catches it in flight. In two drones, it solves one of the major problems that has vexed all levels of aviation: a body built for vertical takeoff isn’t the best body for distance flight, and a fixed-wing body built for efficiently flying needs a runway to work. Google’s own delivery drone attempted to fly level and take off like a copter, but they, like many others before, them abandoned the idea as unwieldy.

The ScanEagle is one of the military drones that the FAA has authorized for commercial use, so FLARES wouldn’t just help the military get drones into difficult places, but it could let businesses use mid-range drones in otherwise difficult environments.

Watch the full process below: