This may be the most promising herpes vaccine ever

Which is good because pretty much everyone has herpes 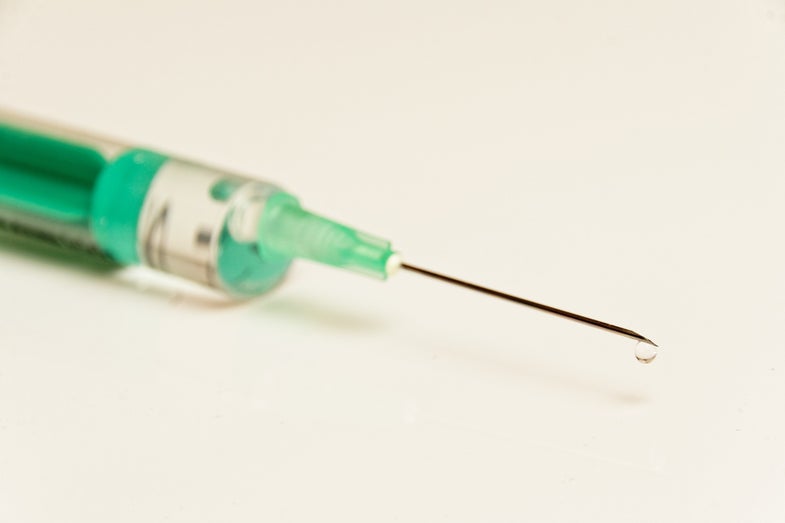 Newsflash: You probably have herpes. This is actually okay. According to the World Health Organization, over two thirds of the global population have HSV-1 (commonly known as oral herpes or cold sores) and more than 10 percent have HSV-2, or genital herpes. Given that HSV-2 rates are much higher among women, urbanites, and minority groups than in the general population (and given that HSV-1 increasingly shows up as a genital infection instead of an oral one), herpes is easily the most common sexually transmitted infection.

How did over 4 billion folks end up with one of the two strains of herpes simplex, and what can we do about it? It all comes down to the virus’s ingenious method of infection—it’s designed to evade your immune system so well that it can stay in your body for an entire lifetime. But scientists now believe they can stop herpes from using its slickest skills. In a study published Thursday in PLOS Pathogens, researchers describe a new vaccine designed to hit herpes right where it hurts.

According to the study authors and other experts, this could be the closest we’ve ever come to eliminating the virus in the human population. With any luck, human trials could start in just a year or two.

Once someone is exposed to HSV, they have it for life. The virus lives insidiously inside nerve cells, hiding from the immune system and popping up to occasionally cause blister outbreaks—or not. For most people, herpes is no big deal, health-wise: studies have found that most people with HSV-2 never get symptoms and never know they have it.

But while it is possible to push transmission risk down to nearly zero with the use of condoms, preventative anti-viral medication, and close monitoring for any outbreaks, lots of people unwittingly spread the virus. And not knowing you have herpes can be dangerous: it increases your risk of getting HIV, and it can cause severe health problems in newborn babies if passed from mother to child during labor (many researchers now believe this is only likely to occur if a mother gets HSV during pregnancy—so again, HSV status knowledge is power).

That’s why researchers want to eliminate both strains of the virus entirely. For most people, it’s nothing—but you don’t want something that can cause severe health problems kicking around in most people, especially when it so often goes undetected.

Study author Harvey M. Friedman, a professor at the University of Pennsylvania School of Medicine, has been working on cracking the herpes vaccine conundrum for a decade. But before that, he spent another 20 years marveling at the mechanisms herpes uses to infect us.

“Herpes is one of those virus that’s just amazing at evading our immune system,” he told Popular Science. “It can lay dormant, with people who are immunologically healthy getting it over and over again. And we all asked ourselves, how could it possibly do that in the fact of an intact immune system?”

He and his colleagues found that HSV produces a pair of proteins that are particularly adept at keeping the human immune system from producing antibodies, the proteins that would normally learn to recognize and combat an infection.

“Many people working on herpes vaccines make them target a key part of the virus that allows entry to cells, where they grow and reproduce,” Friedman said. “But in human trials, that strategy just doesn’t really work very well.”

In the new study, Friedman and his team combined this traditional strategy with a new line of offense: They attacked the usual cell-entry proteins, but they also attacked the so-called evasion molecules that help herpes hide.

“So it helps the body make antibodies that can attack the virus, but then it also keeps the virus from hiding from those antibodies,” he said.

The group tested the vaccine in two animals infected with HSV-2, or genital herpes: macaque monkeys and guinea pigs. The monkeys were there for obvious reasons—their immune systems function nearly identically to ours, so if the vaccine works on them, it should work on us. And the researchers saw the immune response they expected, across the board (though the monkey group, Friedman openly admits, was quite small).

Unfortunately (or fortunately, if you’re a macaque), monkeys don’t exhibit the same HSV symptoms that humans do. The researchers could observe the vaccine’s efficacy on the cellular level, and they saw reduction in the mild inflammation that monkeys display when infected with herpes, but there weren’t full-blown symptoms for them to examine.

That’s where guinea pigs come in. “They’re really the gold standard for testing genital herpes vaccines and treatments,” Friedman said, because the poor little critters have pretty much exactly the same physical response to the virus that humans do. The vaccine was almost completely effective in these animals as well, protecting most guinea pigs from infection and lowering the detectable amount of the virus in their bodies after exposure.

“I really do think this is more promising than other vaccine research out there,” Friedman said. “I’ve never seen anything published that comes close to our efficacy.”

Yale School of Medicine’s Akiko Iwasaki, who wasn’t involved in the new study, agreed. “I think this one is hopefully very close to hitting the market,” she told Popular Science. Iwasaki, who said she’d been following Friedman’s efforts for years and found his approach “highly innovative and logical,” was especially heartened by the results in monkeys and hopes to see human trials follow soon.

Friedman says money is the only thing standing between his research team and the pharmaceutical market. Before their vaccine can be tested in humans—which is a three-step, years-long process in and of itself—the group will need to complete rigorous testing to show the drug is not inherently harmful, and that it’s being produced safely. But if they can find a pharmaceutical company to take on the costs, Friedman said, the drug could be tested in humans in less than two years.

If successful, the vaccine could be used like the HPV vaccine Gardasil—doctors might recommend that people receive it before becoming sexually active. And while the recent study focused on prevention, it’s possible the vaccine will also help mitigate symptoms and lower transmission risk in people already suffering from HSV-2. Friedman is hopeful that the vaccine will work on HSV-1 as well, as-is—but he can’t be sure until they run those trials.

“To me, the groundbreaking thing here is that we’re trying to remove evasion as a strategy,” he said. “And that could really open up the field, not just for herpes. There are so many chronic, persistent, recurrent viruses that we could use this strategy on … I wouldn’t be able to pick one to work on next.”