Scientists may have just made a malaria vaccine breakthrough

But the vaccine has its limitations 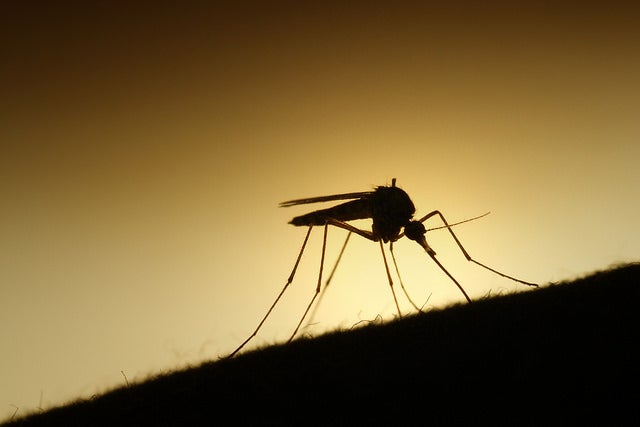 A mosquito's bite does more than itch - it can be deadly if the malaria parasite is hitching a ride. Erik F. Brandsborg, Flickr
SHARE

Fever, chills, vomiting, headache, mental confusion, and occasionally death: That’s the prognosis for more than 200 million people infected with malaria each year. Preventative measures aimed at reducing risk exposure—that is, avoiding mosquito bites—have had some success. But the ultimate solution, a vaccine, has remained elusive for decades. In fact, the 2009 book The Elusive Malaria Vaccine: Miracle or Mirage? tracks the long history of scientific effort in that arena. Now, however, a study published Wednesday in the journal Nature suggests scientists may have cracked the code.

“We’ve known as scientists that you could immunize with the bite of a radiated infected mosquito since the 1970s,” says study author Stephen Hoffman. Hoffman is the chief executive and science officer at Sanaria, a biotech company focused on developing vaccines that work against malaria.

And scientists have known since 2009 that the bite of a mosquito treated with the antimalarial drug chloroquine also confers immunity. The problem, says Hoffman, is that a vaccine carried only by mosquito bite is horribly impractical. “You can’t take mosquitoes to your doctor’s office and let them bite you,” he says.

A malarial vaccine has remained elusive, in part, because malaria is caused by a parasite—not a virus.

“We’re used to vaccines that against viruses that are very simple in their antigens,” says Peter Bull a pathologist at Cambridge University who was not a part of this study. Antigens are the molecules that trigger an immune response. “But malaria is a thing that moves around and transforms itself. It’s incredibly sophisticated. It’s a different game altogether.”

Based on the earlier mosquito bite studies, researchers knew that something in the sporozoite stage of the parasite’s lifecycle could confer potential immunity. That’s the spore-like stage of malaria’s lifecycle where it appears in mosquito saliva and can infect humans. In theory, researchers could hack that trick to turn it into a vaccine. “But the parasite has more than 5,000 genes, and we’re not smart enough to figure out which one of those is the most important,” Hoffman says.

So instead Hoffman’s team developed a mechanism to extract the sporozites, then figured out how to purify them and store them so they could be injected into a patient. Essentially, they turned those impractical mosquito-spit-based vaccines into something you really could imagine in a doctor’s office.

“It’s translating a kind of research vaccine into one that could possibly be used,” said Bull. “This is a major step, there’s no taking away from that.”

Subjects were given chloroquine, an anti-malarial drug, and then injected with live sporozites. The sporozites conveyed the immunity usually passed along by those manipulated mosquitoes, while the chloroquine weakened the parasite to keep subjects from any chance of getting malaria. Ten weeks after injection, the nine subjects had total immunity.

While that isn’t long enough for people residing in a malaria zone, people going on vacation or briefly working in one of these areas might benefit from a shorter-term vaccine. Courses of anti-malaria drugs can cause nasty side-effects, so some travelers might opt for the protection of an injection instead. The next step is to show that it works against all five strains of malaria infection, and across different age groups.

“This is a first step,” says Hoffman. “We still have a lot of work cut out for us. But we believe that this kind of approach can be used to immunize the entire population, so we can halt transmission of the parasite and eliminate it geographically from systematically defined areas.”

In the future, those geographically defined areas might include the United States. Malaria used to be common in the American South and climate change has led to a resurgence of mosquito-borne diseases. It may only be a matter of time before we find malaria crossing our own borders.