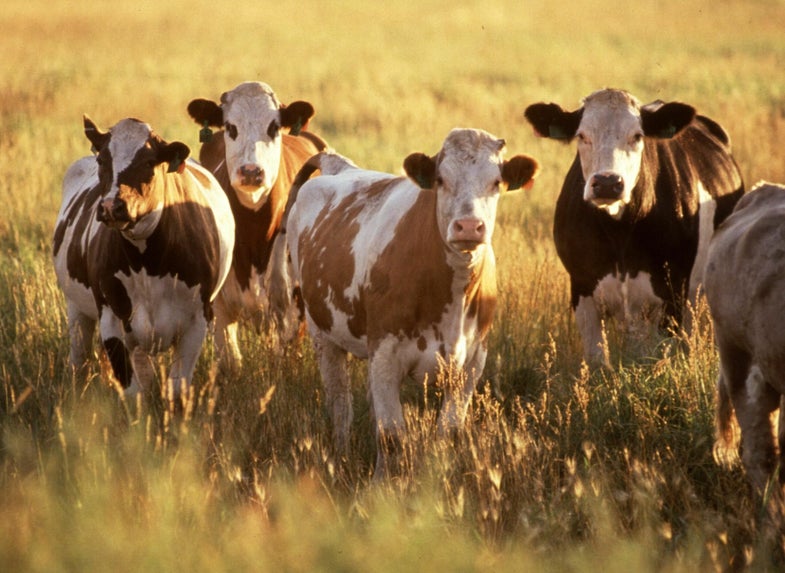 More than 1,600 people worldwide have been infected with Middle East Respiratory Syndrome, or MERS, and complications from it have resulted in nearly 600 deaths. But in the three years since scientists identified the disease, they haven’t been able to discover a way to treat or prevent infection. Now a team of international researchers has used genetically modified cows to create antibodies that combat the disease, which could mean that a vaccine might soon be possible. The research was published today in Science Translational Medicine.

Though infected camels are thought to be the initial source of MERS, most animals, such as cows and mice, aren’t affected by the virus. In earlier studies, scientists have used cows to better understand human immunity, so for this experiment researchers decided to tweak the cows’ genomes slightly so that they carry a human chromosome. That genetic code enabled the cows to create MERS-specific proteins called antibodies that “tag” potentially dangerous cells to be eliminated by the immune system. When the researchers exposed the cows to low doses of the MERS virus, their immune systems created antibodies tailored to the human form of the disease, allowing their bodies to launch a full immune response.

Then the researchers wanted to make sure the antibodies worked. In a petri dish, the antibodies extracted from the cows’ blood attacked MERS cells. Then, mice that were genetically modified to be affected by MERS were protected from infection if they were given a dose of the antibodies before and after exposure to the virus.

Because these antibodies have not yet been tested in humans, the researchers can’t be sure that they will be quite so effective, or that they won’t cause an averse immune reaction in patients. The researchers hope to test them in humans in the near future, but they think the cow antibodies are a promising candidate to vaccinate people at risk against MERS.