White parents are more likely to think their daughters don't need the vaccine. 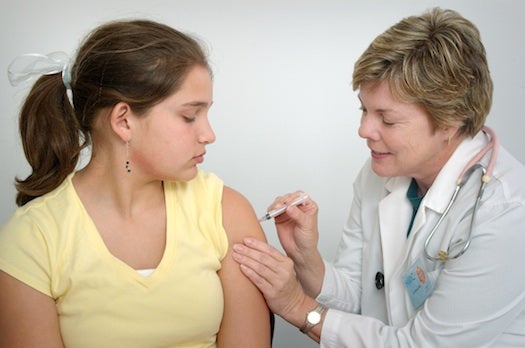 The HPV vaccine may be the only vaccine in the U.S. that significantly fewer white Americans have received than minority Americans, the New York Times‘ Well Blog reported. The reasons are not clear, but the Times suggests that white parents might be more likely to worry about the vaccine’s safety and moral implications.

About a third of teenage white girls and a third of teenage black girls have had all three doses of the vaccine. Forty-two percent of teenage Hispanic girls have had all the doses. Those numbers are especially surprising because they seem to have little to do with health insurance rates among kids in the U.S.: One in ten white children don’t have health insurance, compared to one in six black children and one in four Hispanic children.

“I can’t remember a vaccine where I saw a pattern like this,” Walter Orenstein, the former director for the U.S. Centers for Disease Control and Prevention’s immunization program, told the New York Times. As recently as a decade ago—check out this article, which cites a 2002 survey—minority kids were consistently less likely to get their immunizations. Since then, the trend has been toward greater equality. CDC numbers for 2010 generally show no significant differences in vaccination rates between kids of different races for diseases such as measles, polio and pertussis.

The two Food and Drug Administration-approved HPV vaccines available in the U.S. are Glaxo-Smith-Kline’s Cervarix and Merck’s Gardasil. Cervarix protects against two human papillomaviruses that cause 70 percent of cervical cancers, while Gardasil protects against those two viruses, plus an additional two viruses that cause 90 percent of genital warts. The Centers for Disease Control and Protection recommend the vaccines for girls and women ages 11 through 26, plus boys and men ages 11 through 21. Usually kids get the shots at age 11 or 12.

Since Gardasil first came out in 2006, however, doctors seem to have had a tough time convincing parents to get their kids vaccinated. Especially white and black parents. Compare the numbers above with the rates for common childhood immunizations such as the DTaP, MMR and polio vaccines, which 90 percent or more of kids of all races get.

And another? One survey showed that people who go to private clinics are more likely to think their kids don’t need the vaccine. Patients at publicly funded clinics would rather take the precaution, Rebecca Perkins, a professor of obstetrics and gynecology at Boston University School of Medicine, explained to the Times. In reality, however, rates of sexual behavior in all of the teenage girls in the survey were pretty equal.