The global COVID death toll has probably passed 15 million too. 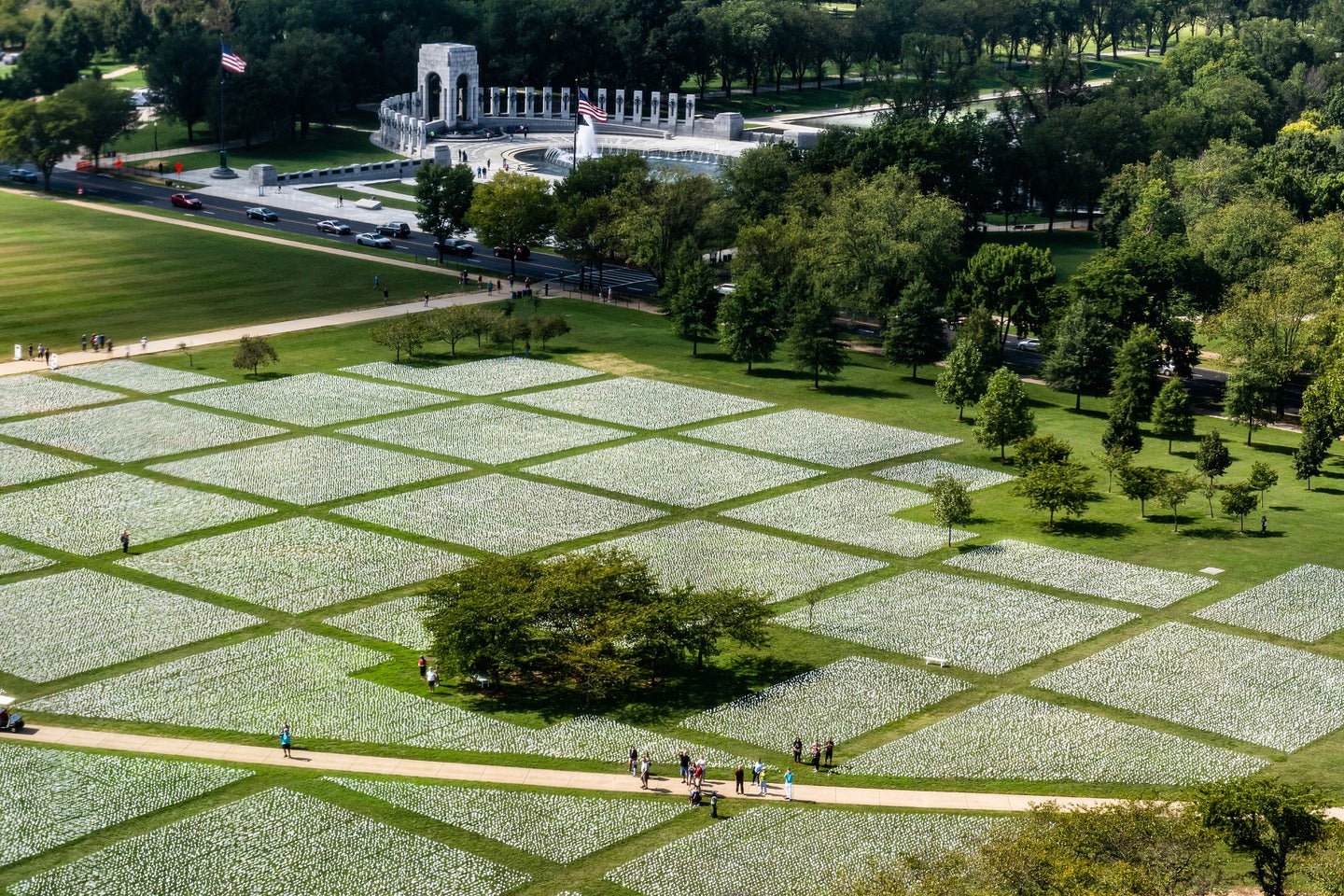 Last September, the National Mall outside the White House and Washington Memorial was covered in hundreds of thousands of white flags, each to commemorate an American who died of COVID. Adam Schultz/White House
SHARE

Almost two years and two months after the World Health Organization (WHO) called COVID a pandemic, the US officially passed the 1 million death toll for the virus. It is now well beyond any other mass-mortality event in American history, including the 1918 flu pandemic.

“Today, we mark a tragic milestone: one million American lives lost to COVID-19. One million empty chairs around the dinner table. Each an irreplaceable loss,” President Joe Biden shared in a statement early this morning. In respect, he ordered all American flags on public grounds across states and territories, along with those at embassies overseas, to be flown at half-staff through May 16. The White House has not scheduled a live address to discuss the death toll any further. The Centers for Disease Control and Prevention (CDC), the national agency leading the public health response to the virus, hasn’t commented on the grim figure. Its COVID data tracker still holds US fatalities at 995,474.

The first death of a person from SARS-CoV-2, the virus responsible/behind for COVID, was recorded in January 2020 in Wuhan, China. The first person in the US died about a month later in Kirkland, Washington. The domestic figure snowballed that April and May, and hit a new peak at the start of 2021. Even in January and February of 2022, the average daily death count hovered well over 2,000. At current, America has the highest body count from the pandemic—but many experts think other countries severely underestimated their losses. Last week, the WHO announced that the global COVID death toll could be as high as 15 million individuals.

It’s possible that the US passed the 1 million fatality mark even earlier this spring. NBC News reported that the millionth mortality happened before May 4 using data from state health departments, which is often more current and accurate than national sources. But the White House did not confirm or deny the number at the time.

In addition to the unprecedented number of deaths, COVID has sickened millions of people in the US and hampered many of them with long-term disabilities. Last month, the CDC estimated that 58 percent of Americans had been infected by the virus before March 2022, based on antibodies in blood samples taken from around the country. That includes a good chunk of children below the age of 11, many of which are still not eligible for vaccines.

The vast majority of the people who died from COVID in the states and territories were ages 65 and older. The death rate is also slightly higher among male patients than female, and proportionally higher in Black, Native, and Latinx Americans than white and Asian Americans. There were also surges in late 2021 and early 2022 where unvaccinated individuals were dying at faster rates than the rest of the country’s populace. But over the past weeks, the heaviest mortalities have fallen on very old and sick populations, despite their high vaccination rates. (See this STAT News article for a detailed visual breakdown of the 1 million figure.)

President Biden also briefly touched on the need to continue to diagnose, treat, and protect people suffering from long COVID and other post-infection complications, along with those who have dodged the virus so far. “We must remain vigilant against this pandemic and do everything we can to save as many lives as possible, as we have with more testing, vaccines, and treatments than ever before,” Biden’s statement read. “It’s critical that Congress sustain these resources in the coming months.”

More than a dozen countries, nonprofits, and companies gathered in Washington, D.C. today for the second Global COVID-19 Summit. In her address at the beginning of the meeting, Vice President Kamala Harris said that of the $22.5 billion emergency COVID funds that Congress still needs to approve, “5 billion would be dedicated to continue [US] leadership in helping to save lives around the world,” namely in the form of vaccines and antiviral treatments for nations with low GDPs. “The future, of course, will present other global health crises,” she continued. “But they don’t have to become catastrophes if we do this work together.”

Meanwhile, COVID is still circulating in the US, with new Omicron strains causing infection and hospitalization rates to climb again. Last month, the Food and Drug Administration green-lit a second booster for Americans who are older than 50 or immunocompromised. Discussions are still ongoing on whether to allow another shot for anyone eligible for vaccines, along with the possibility of variant-specific immunizations as the pandemic continues into year three.