We may have grossly underestimated COVID-19 infection rates

Labs and blood banks collect millions of samples each month, offering a distinctive source of data to track cases and also study immunity before and after vaccination. 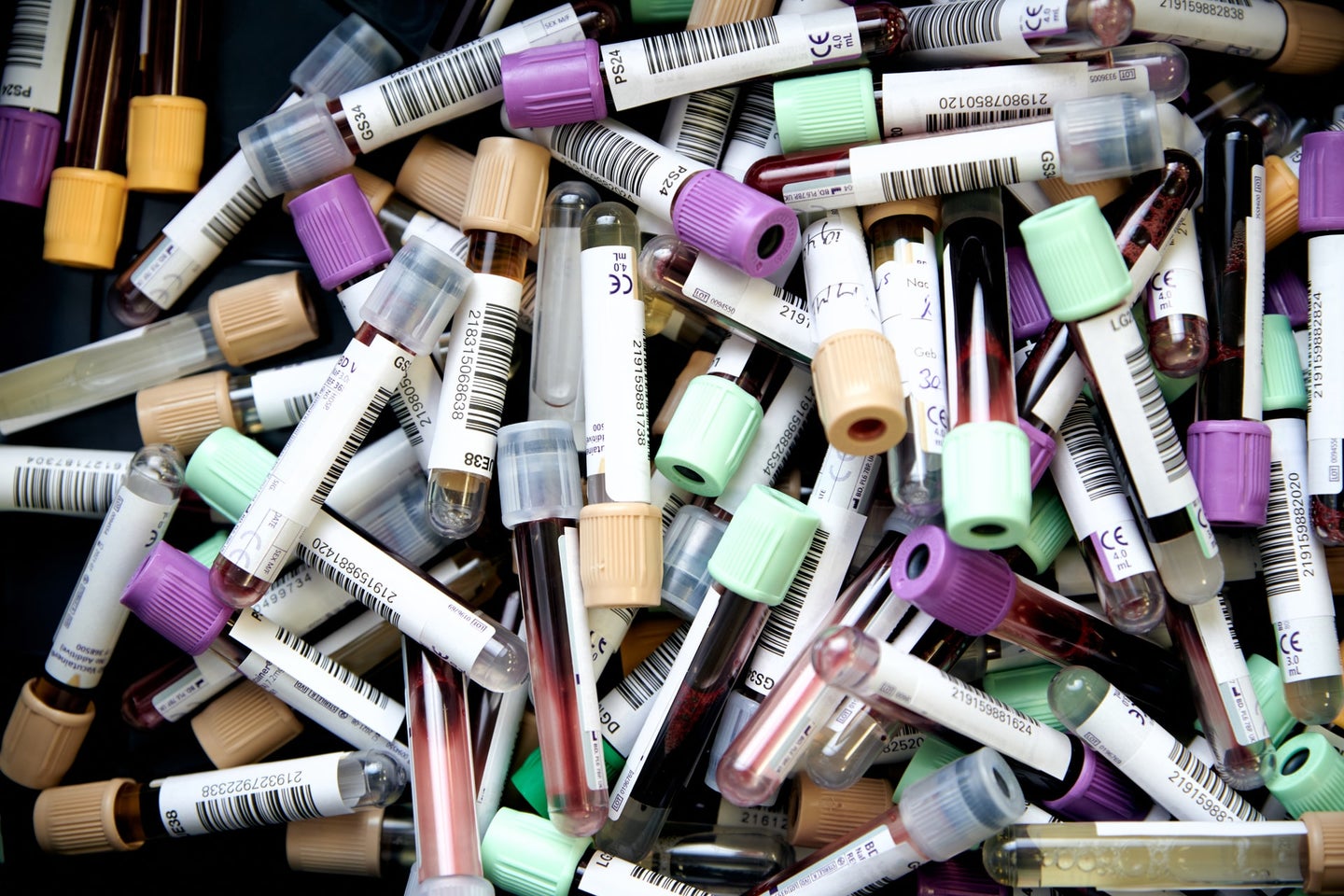 Blood donors answered the call for supplies in the early months of the pandemic—and have helped to track it in some instances. testalize.me/Unsplash
SHARE

Nathaniel Scharping is a science writer based in Milwaukee. This story originally featured on Undark.

In March, as the COVID-19 pandemic began to shut down major cities in the US, researchers were thinking about blood. In particular, they were worried about the U.S. blood supply—the millions of donations every year that help keep hospital patients alive when they need a transfusion.

The researchers were able to put to rest their initial concerns about the virus spreading via the blood supply. But they quickly realized that all those blood donations might offer a vital source of data on the pandemic.

When COVID-19 infects someone, the immune system’s response to the virus leaves behind detectable proteins in their blood. In March, with funding from the National Institutes of Health, a group of scientists working with blood banks around the country quickly launched a program to surveil the blood supply in certain regions for those traces of COVID-19 infection. With funding from the Centers for Disease Control and Prevention, that initial program expanded to a nationwide effort known as the Multistate Assessment of SARS-CoV-2 Seroprevalence (MASS) study, which has analyzed roughly 800,000 donations so far.

This kind of research, sometimes called a serosurveillance or seroprevalence study, is one of the best ways to track the still-expanding pandemic, say researchers involved with the project. It also represents one of the largest federal government efforts to estimate the full scale of a virus that has produced more than 22 million confirmed infections in the US—but that, experts say, has actually infected perhaps twice as many people, sometimes without causing any symptoms.

Some researchers question how effectively blood donor studies can be used to estimate the true extent of COVID-19′s spread, in particular because blood donors are not representative of the nation as a whole. And some other seroprevalence studies have set off fierce debates among researchers and policymakers, who have raised questions about the accuracy and implications of specific methods. Still, experts say large studies like MASS have provided irreplaceable data on the pandemic’s spread, and that they will continue to do so as vaccines roll out.

In the spring, “the big question was how many people really got infected,” says Michael Busch, an adjunct professor of laboratory medicine at the University of California, San Francisco, and director of the nonprofit Vitalant Research Institute, which studies blood donors and the blood supply. Today, says Busch, he and other researchers working on the MASS study are watching the blood supply to understand the effect and persistence of the vaccine response. “Now people are saying, ok, well, people were infected once, what’s the durability of the protective immune response, especially as we’ve gotten resurgent outbreaks?”

Most people who get COVID-19 produce proteins that mark the invading virus, even if they never show symptoms. These proteins, called antibodies, are critical elements of the human body’s immune response to infections. Once the virus disappears, antibodies can stick around in the blood for months after an infection, where they can be detected by simple diagnostic tests. Because it’s nearly impossible to have specific antibodies to COVID-19 without being infected—at least before a vaccine is widely available—they’re a good, though not perfect, sign of a past infection.

Since early in the pandemic, scientists have used antibodies to try to estimate the true number of COVID-19 infections in the community, mapping the invisible scale of the pandemic. Some of those studies work a bit like a public opinion survey, taking samples from randomly selected people. Others look at specific groups, like dialysis patients or hospital workers.

MASS is taking the second approach, but on a much larger scale. The program is split into two studies, one relying on blood from the hundreds of thousands of people who donate blood every month, and the other on people who have had blood drawn as part of their medical care, such as for a cholesterol test.

Each month, more than a hundred thousand samples from nonprofit blood donation organizations around the country are shipped to testing laboratories to search for antibodies. A similar process takes place with clinical samples.

Their data so far suggest that a lot of people have had COVID-19 without ever receiving a diagnosis. Confirmed case counts suggest that almost 7 percent of people in the US have had the virus. Data from the arm of the study looking at blood from clinical laboratory tests from all 50 states, the District of Columbia, and Puerto Rico found rates of antibody positivity that at times ranged from under 1 percent in some states to 23 percent in New York.

Data from the American Red Cross, which is providing serosurveillance data as part of the MASS study, indicated that 8.4 percent of US blood donors it tested in a week in late November carried antibodies to Covid-19 in their blood, wrote Susan Stramer, vice president of scientific affairs at the American Red Cross Biomedical Services, in an email. That was roughly double the percentage of the US population that had had confirmed cases by that time.

Earlier in the pandemic, some experts and pundits drew on seroprevalence studies to suggest that COVID-19 may be less dangerous than feared, and that the virus could be left to spread widely until much of the population achieved immunity. But, researchers say, the MASS data indicates that herd immunity, something President Donald J. Trump has consistently touted as a solution to the pandemic, is still far out of reach. In most states, MASS finds that less than 10 percent of people test positive for COVID-19 antibodies, far less than the roughly two-thirds, or more, most experts say is likely necessary to reach herd immunity. That means achieving herd immunity without a vaccine would entail allowing many more people to become sick, adding to a death toll that has topped more than 375,000 people in the US.

“The main message is that most people have not gotten sick yet,” says CDC epidemiologist Chris Edens, who is involved in the MASS study. “And so following public health guidance, including wearing masks, maintaining social distance, avoiding crowds, remains the best way to prevent yourself or someone you love from getting sick.”

Some experts have reservations about the use of blood donation data to estimate the prevalence of COVID-19. “The problem with blood donors—and this is also supported by evidence from other epidemics like HIV, and previous pandemics—is that blood donors are weird people” from a statistical point of view, says Gideon Meyerowitz-Katz, an epidemiologist at the University of Wollongong. “And blood donors who give blood during a pandemic, when the country is in lockdown in particular, are very weird people.”

Donors tend to be younger and healthier, and more likely to be White, than the US population at large, says Edens. Blood donors also need to be at least 16 years old in most states, meaning serosurveillance studies of donors don’t include data from children.

Meyerowitz-Katz is a co-author of two large review studies that estimate the true fatality rate of COVID-19—a number they get by dividing the number of people who have died from COVID-19 by the estimated total number of infections. He and his colleagues decided to completely exclude studies like MASS from their analysis, largely over concerns that the population of donors is not representative of the public at large.

Meyerowitz-Katz says he’s still puzzled that the US hasn’t conducted a truly random national serosurveillance study, as has been done in Spain, Pakistan, Iran, and elsewhere. “The CDC wrote the book, literally the book, on how to run a randomly-selected national sample,” he says.

Busch points out that there have been smaller randomly selected serosurveillance studies in the US. There have been studies in Georgia and Utah, for example, that tested for antibodies in randomly selected census blocks and households within a region. “The goal is to piece all these datasets together and see what we see, and see to what extent are these different samples biased,” he says.

Researchers also say they can correct for those biases. “We do know the demographics of all these donors,” Busch sats, allowing the researchers to adjust their results to better reflect the demographics of the US as a whole. Edens said clinical blood tests also help to balance out some of the biases in the blood donor sample.

Studies of blood donors and samples from clinical blood tests have other advantages, too, says Mars Stone, a UCSF adjunct professor and virologist at Vitalant who’s helping run the MASS study. The technique, she says, offers “a very cost-effective and convenient sampling of the general population.”

Any serosurveillance study, regardless of type, will have some limitations. Antibodies fade from the blood over time, meaning people infected at the beginning of the pandemic might not test positive now. And some people seem to simply never develop antibodies in their blood at all, Busch says, meaning there’s nothing for a blood test to pick up.

Regardless of the specific methods used in the surveys, many experts agree that serosurveillance studies have offered evidence that COVID-19 is uniquely dangerous, especially for certain age groups. “By the time you’re in your 50s, even, or 40s, you’re at a risk that is tens of times higher than your risk of dying in an automobile fatality, or a dozen times higher than influenza,” says Meyerowitz-Katz.

While Meyerowitz-Katz may be skeptical of the role that blood donor studies play in estimating the true infection rates, he argues that the data has value. “I think blood donors and clinical samples are really useful as sentinels,” Meyerowitz-Katz says. “You may not be able to get a precise number out of them that gives you an exact idea of the prevalence in the population, but you can see the trends. And sometimes that’s as important.”

That sentinel role may be especially relevant as the nationwide COVID-19 vaccine rollout progresses. The MASS data will help track, for example, how many people who get a COVID-19 vaccine get the disease anyway, according to Busch. And he said some tests used in serosurveillance studies can show how quickly antibodies fade after an infection or immunization, potentially leaving people susceptible to being infected with COVID-19 again.

This work will also grow more complex as vaccines become available, leaving some people with antibodies they received from the immunization, not the infection. MASS is already picking out people who are taking part in large-scale vaccine trials. Indeed, as public vaccination begins, MASS researchers now find themselves tackling a more encouraging task in the days ahead: to find ways to distinguish between those who got the vaccine and those who were actually infected with COVID-19.